The Game Kitchen’s highly anticipated Kickstarter title immediately impressed with its gorgeous pixel art and surprisingly grim premise. Fast forward two years, and we finally have our hands on the brutal action platformer that pays homage to series like Castlevania and Dark Souls. You assume the role of the Penitent one, the sole survivor of the massacre of his brotherhood, and your task is simple, the ascend to the peak of the city and break the curse of death and rebirth, all while battling some truly horrifying enemies and bosses and avenging your slain order. There are an abundance of metroidvanias over these past few years, but there’s a lot of things Blasphemous does better than any of them, and a lot of things that hold it back.

Let me make one thing known right off the bat. This is not a Souls clone. Despite it’s influences, from the bonfire style Prei-Dieus and its satisfyingly brutal combat, Blasphemous is very much its own beast. Set in the world of Cvstodia, you’ll explore a wide variety of areas, all indirectly impacted by The Great Miracle in one way or another. From the plague-ridden depths of the Descrated Cistern to the oppressive darkness of the giant bell turned labyrinth Jondo, The Game Kitchen absolutely nails it in terms of atmopshere and execution. Cvstodia is probably the biggest appeal with Blasphemous, and exploring this world drenched in blood and overtly religious zeal never stopped being appealing to me.

Unfortunately, despite the effort that has been put towards the lore, I do feel like the story is a little too cryptic. The actual beginning of the game is hidden behind a kickstarter comic, which answers some questions I had with the plot, but not all of them. Why was my entire order slain? Why do these knights seem to despise me so? I feel like if Blasphemous had a bit more cohesion around its story, and had the same effort directed towards it like it received with its overall lore and atmosphere, it would have been fully satisfying, rather than leaving me with a few burning questions. I do appreciate the presence of Deogracias, a recurring NPC who gives extra backstory as I progressed through the game. Not all the NPCs had the same quality of voice acting though, with a few sounding rather poor compared to some of the stronger performances. 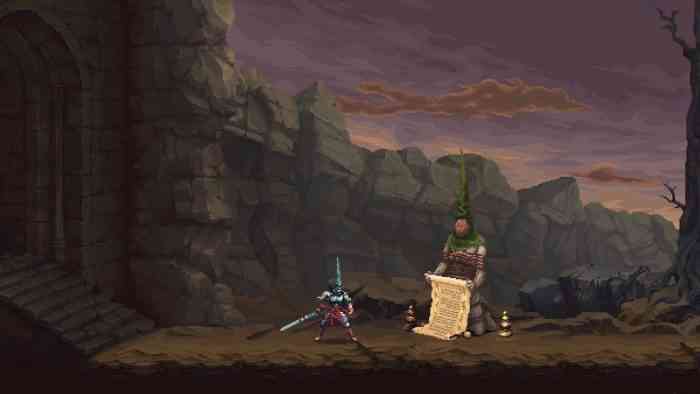 Fortunately, the core gameplay of Blasphemous is enjoyable enough that despite the shortcomings of the story, I was still excited to see what other challenges popped up along the way. Combat is simple, but highly satisfying thanks to the extremely well done animations and sound design. Each blow from Mea Culpa lands with a hefty crunch, and parries clang with a resounding weight that help make each attack feel like its dangerous to receive. Enemies have a nice bit of variety of them, although I do wish there were a few more creative designs on top of what was in place, given how creative The Game Kitchen has shown themselves to be. Each boss was also enjoyable to fight, although a few of them easily outshine the rest thanks to them being either more creative, be it visually or mechanically.

A highlight for me was a boss fight that took place in a vertically scrolling arena that threw obstacles alongside the fight itself. It kept me on my toes, and when I completed it I was buzzing with satisfaction. This same sentiment echoes with a few other fights against the more humanoid enemies, requiring learning patterns and overcoming them via usage of parrying or the various prayers I could make use of. Those particular fights felt like the stronger ones overall. There are also a lot of options with customization for The Penitent One. You can augment your resistances and movement with various rosary beads that you equip. You can also make use of a number of sword hearts that offer benefits at a cost. One heart I was particularly fond of resulted in more powerful prayers with the drawback of them costing extra fervour, the game’s equivalent of MP. Tracking these hearts down also feels satisfying, due to how well some of them are hidden.

The level design of Cvstodia is quite strong. Areas have plenty of those shortcuts that help you bypass tricky sections. Each level is also packed with secrets that are worth pursuing. Some of the puzzles and secrets in the game are particularly creative as well, tying into items you find, or ways you interact with particular items in the world. Across the twenty or so hours I spent with the game, I ended off with about 85% completion, and I like to think I went out of my way to find things although I was disappointed that the total number of slots didn’t quite line up with what I found.  Backtracking in Cvstodia is very tedious though, thanks to a number of poorly placed warp-spots, and a lack of abilities such as a double jump or super jump a la Symphony of the Night, one of Blasphemous’ main inspirations. The team has plenty of planned DLC for Blasphemous, but it does need additional refinements as I found bugs and glitches to occur more often that I would have liked. 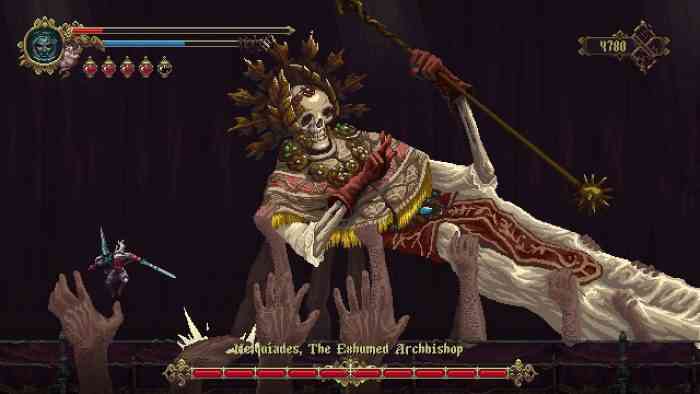 Plenty of people online are also reporting issues ranging from minor issues to outright game-breaking ones. Luckily I never ran into any of the major ones, but there was more than one time that I feel like I could have avoided a death that was caused by a hitbox of a particular enemy, or when I missed a jump that I shouldn’t have. The majority of Blasphemous plays really well, but there are just particular areas where the platforming doesn’t feel like it’s been tuned fully, resulting in some frustrating glitches. Combat with some enemies can also feel a little janky, thanks to weird animation bugs or hitboxes on some attacks seeming to stunlock, not giving me a chance to escape.

As it stands in its current form, I will say that if Blasphemous’ aesthetic interests you even a little, or if you’re a fan of metroidvania-style games, then it’s absolutely worth checking out in its current form. I will also say though that despite how good the performance is on the Switch version, there are bugs and animations/interactions that could use more tuning. Blasphemous in its current state is a strong entry in the genre, and definitely stands close to the top, but with further refinement, it could turn from an interesting title to a true must-play experience.

The Excavation of Hob’s Barrow Releases for Switch
Next The Walking Dead: The Telltale Definitive Series Review – I’m Not Crying
Previous AI: The Somnium Files Review – A Compelling Plot But Not Much Else