Video games have always been about putting gamers into unique roles. Well, it doesn’t get much more unique than the role of a honey bee. Bee Simulator combines the story of a bee, her hive, and the surrounding environment. Along the journey, you’ll encounter angry wasps, beautiful butterflies, and snotty little brat humans that just want to stomp on flowers. Stick around and see what all the buzz is about.

In Bee Simulator, you’ll take on the role of Beescuit (don’t worry – you can pick any name you want, I just kept the default name), a just-born bee that’s ready to do whatever it takes to help her hive. The queen bee assigns Beescuit the role of pollen gatherer. The hive is located in an old tree in Honey Park, a densely populated area filled with all sorts of unique areas like a zoo, a playground, and a number of waterways. During this adventure, the hive is threatened to be torn down by humans, so it’s up to Beescuit and the others to find a way to protect her brothers and sisters.

Bee Simulator is an open-world game, however, some of the eight missions keep you from deviating too much from the mission areas. You’ll be tasked with all sorts of different fetch quests, from collecting pollen to fighting wasps. Each task is a sort of mini-game in itself. For example, when you’re giving or receiving directions to various locations, you’ll play a sort of “Simon Says” dancing game – yes, it’s lame, but according to the game, this is how bees actually give directions for locations. Fighting requires hitting the right sequence of properly-timed buttons to perform hits and blocks. And the most common fetch quest will require you to collect pollen. Sometimes, you can just collect pollen from any flower you see. Other times, you need specific pollen, graded on a colour-coded scale from normal to epic – and the only way to see them is by using your “bee-vision”. 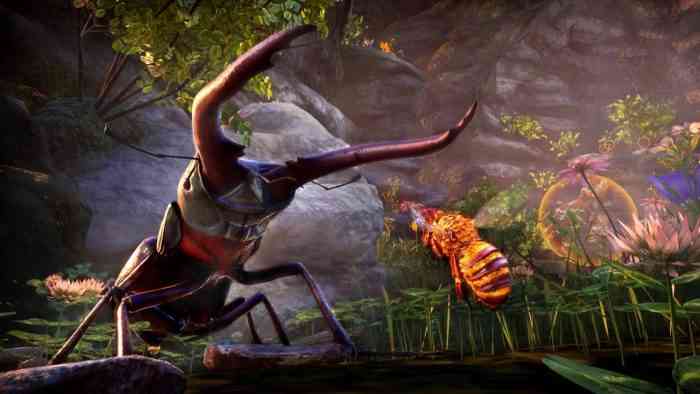 The primary game itself might only take you three to four hours to complete, but there are a number of side-quests that will help stretch that amount of time out. The game features two difficulty settings, so if you breezed through the easy mode, you can challenge yourself to a harder difficulty during the second playthrough. For the most part, the game wasn’t too difficult. Controls generally work well – with only a few hiccups here and there. My biggest frustration came from the racing style mini-games, where you’re tasked with flying through a series of hoops. Miss too many or take too long, and you’ll have to restart. It might not sound too difficult, but in action, it was easy to lose sight of the next hoop.

The game is quite an ambitious game, featuring a relatively large environment filled with bugs, flowers, animals, and humans. It really looked like a living, breathing park – but the character models were not too impressive up-close and the textures often looked a bit muddied. I wouldn’t say it’s an ugly game, and at times while I was flying around, there were times it looked really good. The game is fully-voiced, and while the voice work wasn’t great, it wasn’t overly cringy either. I was often amused at the “Sims”-like murmur that humans spoke as I buzzed on by. The audio highlight of the game is most definitely the soundtrack. An assortment of beautiful compositions filled with strings and pianos – it really added a level of elegance to the whole package. 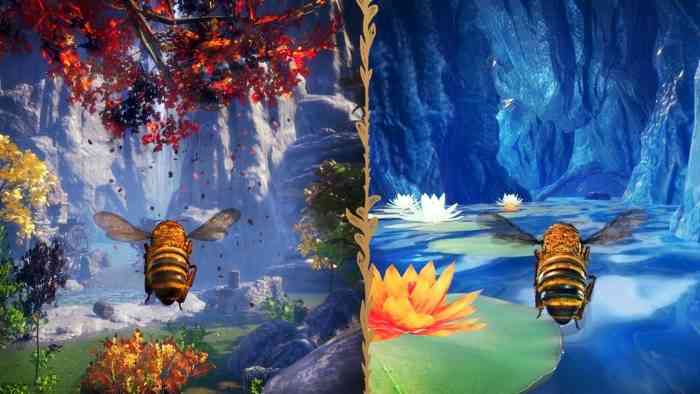 Completing missions will earn you points that you can use to redeem alternate costumes and hats for your bee – a nice little visual touch. In addition, there’s a whole batch of character models you can unlock as well as sort of trophies in the hive. The game has a wealth of bee-related knowledge jammed in too. Even the beautifully, hand-drawn load screens often have bits of neat bee trivia. Completing the game’s primary storyline will allow you to explore the entire Honey Park with no limitations, allowing you to complete any missed side-quests – perfect for completionists. Of course, you can also just buzz around taking in the sights – something I found rather relaxing. Bee Simulator also includes a very limited split-screen mode where two players can explore one of three environments (separate from Honey Park) and compete in various mini-games together. One of the environments is a city block that includes some popular movie and game billboards, albeit with a humorous bee touch.

Bee Simulator does a very good job of conveying the life of a bee while adding in enough gameplay elements to make it qualify as a game. It’s unlikely bees have the quality of conversations that take place in this game, but that just adds to the charm of it all. In truth, none of the mini-games in Bee Simulator were very fun at all – and yet, they were often so short, I really didn’t mind too much. My only frustration came with the racing-style mini-games – they were often confusing. Visually, the game might not compete against triple-A developed titles but at times it still looks good. The game’s soundtrack is excellent and among my favourites from 2019. The game wasn’t very long, yet I imagine there will be times I’ll come back to it, just to buzz around Honey Park. There’s a sort of calmness to it all. In some ways, it reminds me of the old PlayStation 3 game, Flower. Bee Simulator is by no means perfect, but I’d still recommend it if you’re looking for a simple yet unique, family-friendly distraction. 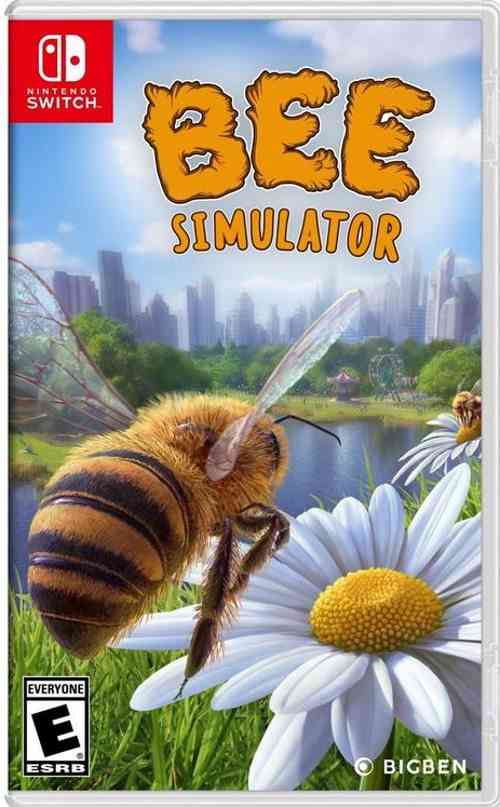 
Ex-developer Explains Why Fable Development Has Been Slow

Why Elden Ring is Better Than You Thought
Next Age of Empires II: Definitive Edition Review – A Remaster for the Ages
Previous Narcos: Rise of the Cartels Review – Fun But Flawed XCOM Clone