Animals are gross, weird little guys if you think about it. They sleep in dirt. They eat garbage! There are things a dignified human wouldn’t do at all. At least, that’s the working theory of Hank and his pals, a gang of woodland critters who want to open a B&B. In Bear & Breakfast, you’re Hank, and you’ve got to build and manage a cozy forest getaway.

Management games can be a little dry, but sometimes they try too hard to overcorrect and they have too much personality. Somehow, Bear & Breakfast ends up in the Goldilocks zone. I was surprised at first at how much story and dialogue were being thrown at me, but I came to really like the sleepy world of Bear & Breakfast. Hank lives in a house with his mom and his two best friends, who are a wolf and a pigeon (his mom is also a bear). The trio of friends run across a robo-shark-kiosk thing that explains to them the basic tenants of capitalism. The gang decides to make profit by opening up the titular establishment, attracting humans back to their woods. Humans do interesting things, and they bring with them garbage, which is delicious. 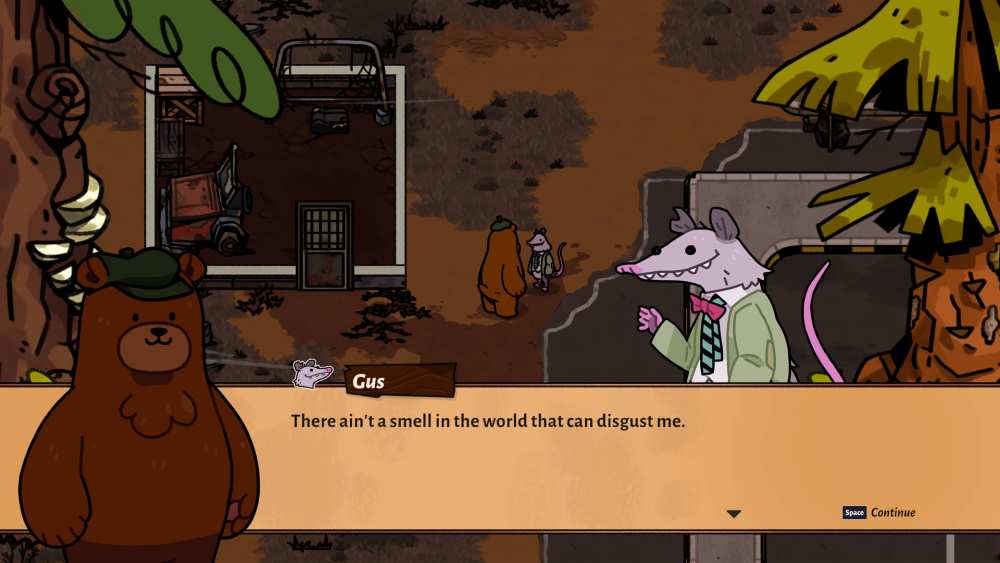 The tone of Bear & Breakfast is definitely shooting for comedy, but it’s a little sad and pathetic too. I would say there’s an almost Winnie the Pooh vibe (now in the public domain!), but the world feels so realistic and dilapidated. You’ll encounter a number of woodland pals, who will tell you about their little corner of the woods. There was a big fire recently, which is why most humans cleared out in a hurry. You’ll scoop out the remains of rotten buildings to refurbish other ones in the name of your hotel franchise.

In the Business of Bears

Management games are best when you can cut right to the chase. All of this business would normally feel like too much, but it’s so charming I didn’t mind at all. As you start to encounter humans, you will get opportunities to make dialogue choices, but all that comes out are bear grunts. And then the human assumes whatever they want and does what they are going to do without regard for your choice. This cracked me up every time. 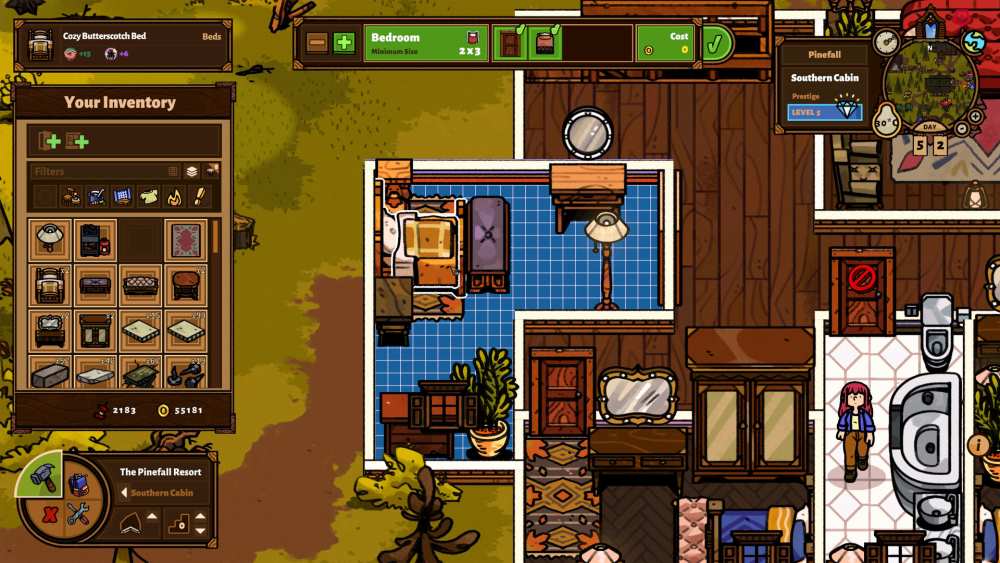 So how are the crafting and management parts of this game? They’re serviceable, but not nearly as winning as the writing and tone. You definitely feel like you are running a B&B and not a factory. You’ll make arrangements for guests at the front desk, and you’ll spend far more time decorating than optimizing. Beauty and fun are the most important things, so you are strongly encouraged to perfectly arrange your broken mirrors and sad flowerpots and whatnot (until you get to more advanced options, but those too are shabby by our human standards).

Nothing ever felt too sophisticated though. Management never feels like a challenge, just a slowly escalating series of standards you have to build to. But the crafting tree feels pretty simple, and the money-making (and spending) part of the game never gave me the sense that I was a business mastermind. I felt like a dopey bear. And yeah, that’s by design. 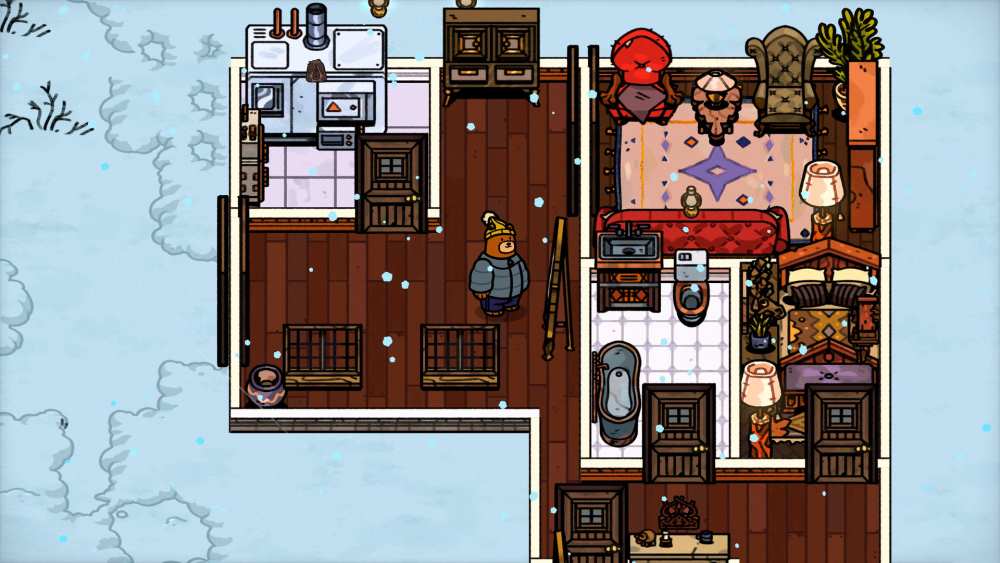 Where I really struggled with Bear & Breakfast was with the controls. As a cute indie game, I thought it would be more fun to play on Nintendo Switch, but it’s actually a bit of a nightmare. It takes way too many clicks to do anything. You need to go to the crafting table, which brings you to a menu. You select the section of the menu you want, then scroll that menu until you find your selection. Unless that opens a different menu. I was constantly losing track of how many times I needed to press B to get back to where I wanted to be.

And Business Is Good

This also leads to building woes. Bear & Breakfast is the kind of game where rooms need to be a certain size and have certain furniture in it to operate. And half the fun is figuring out if you can afford to make a room a little bigger to see if you can fit the armoire in parallel to the bed. (Or whatever floats your decorating boat). But even with my pro-third-party Switch controller, I was always overshooting with my furniture. 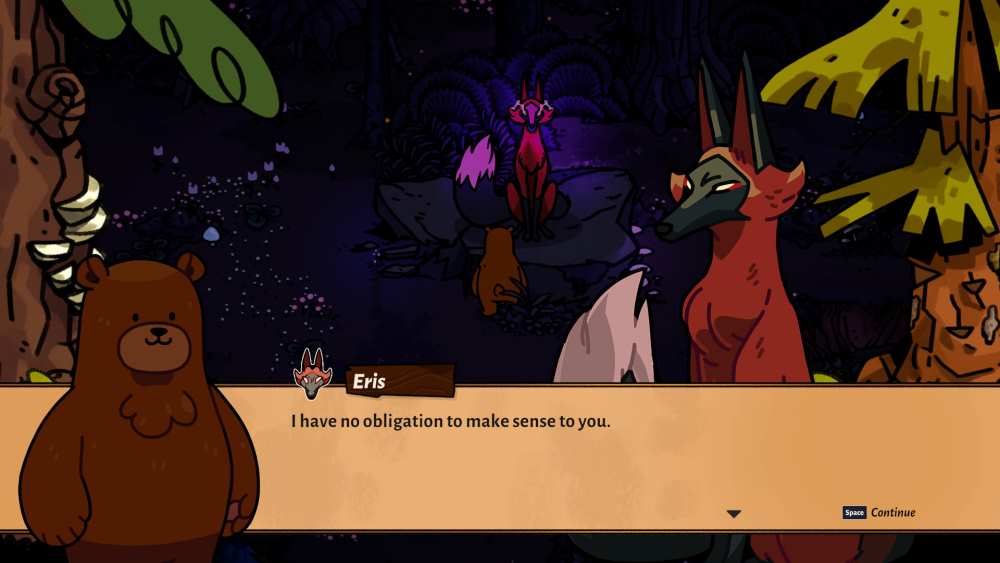 I have to imagine both of those problems feel better on PC, though I can’t know for sure without trying. It would certainly be nice to be able to point and click. (If only there was a console that was the sweet spot between a Switch and a PC. Yeah, I really want a Steam Deck.) The weakness of the building and crafting was probably why I was so drawn in by the writing and characters, but I don’t regret it. The charm is real.

Besides, I have to figure you didn’t pick up something called Bear & Breakfast because you wanted it to bend your mind. This shouldn’t be as hard as running a galactic empire. You’re just a dumb, kindhearted bear. Prospective players probably want to know things like if the bear walks real cute. And he does! He really has a cute little walk. If you’re looking for a cozy little game to take you away from harsh reality, you could do worse than spending your time in these woods.

The Oregon Trail Review – Sunshine and Scurvy
Next Train Life: A Railway Simulator Review – Ridin’ the Rails in Style
Previous Sucker for Love: First Date Review – Smooch the Beyond