Sucker for Love: First Date is one of many games inspired by H.P. Lovecraft’s work. Like many of its fellows, it is a horror game that leans hard into the terror of the unknown. Unlike most of its fellows, it also explores a very specific response to that terror. Namely, the deep and chilling desire to smooch Cthulhu on the—beak, presumably. Octopi don’t have lips.

Like fellow quirky horror title Inscryption, Sucker for Love: First Date started out as a short game jam piece. The original was a quick test build that combined dating sim elements with point-and-click adventure mechanics. However, its most iconic element was the premise. The game focused on Ln’eta, a surprisingly cute incarnation of tentacle-faced Cthulhu, and the human determined to smooch her.

While Ln’eta is not thrilled at being summoned for a kiss of all things, she tasks the player with performing a series of rituals to please her. Carrying them all out perfectly will make her happily give the player that smooch. But Ln’eta is still basically Cthulhu, so screwing anything up—or pissing her off—will make her end the world immediately. Sucker for Love: First Date takes the premise of trying to woo an apocalyptic entity of terrible power and runs with it. This time, you’re not going to end the world to smooch one eldritch being. You’re going to do it repeatedly to smooch three of them.

R’leyh Late to the Party

Here’s the elephant in the room. Sucker for Love: First Date actually came out a while back. Our bad, we dropped the ball on that one. But with the sequel announced, we figured now was a good time to open up the book of forbidden love. Technically, this game is both a remake and a sequel to the original build. Once again, you take on the role of a self-destructive monster fanatic determined to romance Cthulhu. Proving you’re the guy of her dreams will require great dedication, sacrifice, and baring yourself emotionally. And also a willingness to grow a mouth on your hand. 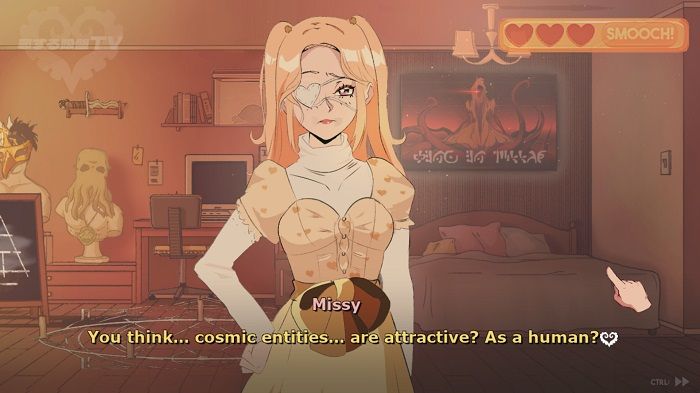 The full version of the game features Ln’eta in all her cutesy tentacled glory alongside two new girls. Joining her is the arrogant and fashionable Estir, the otherworldly entity/planet/visible wave spectrum better known as The King in Yellow. Sneaking up behind them is Nyanlathotep, who is basically the malicious Nyarlathotep reimagined as a very tall catgirl. Each girl has her own charms… and her own nightmare-inspiring horrors.

This game opens with some serious content warnings. Anyone who’s sensitive to themes of self-harm, suicide, and tentacles should think twice before playing. That said, the title strikes a neat balance between quirky, charming romance and nightmarish spiral into madness. And it shouldn’t be a surprise to learn that smooching an eldritch entity is a quest that will destroy you. 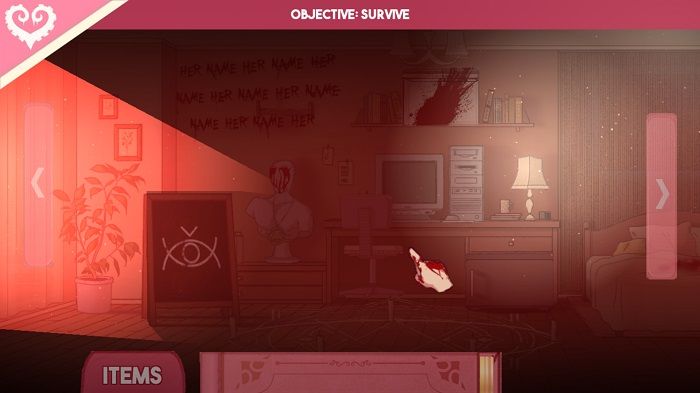 Sucker for Love: First Date is Funny as Hell

Sucker for Love: First Date has its tongue firmly planted in its cheek, but there are some genuine scares. The ambiance grows increasingly unsettling as the smooch approaches. Many Lovecraftian horror tropes are played alarmingly straight. The rituals have some genuinely spooky imagery and sound effects attached, and Ln’eta jump scared me a few times. Estir’s plays are also pretty intense, and Nyanlathotep completely changes the tone of the game for her chapter. You should only play this parody horror game if you’re prepared to deal with a serious horror game. 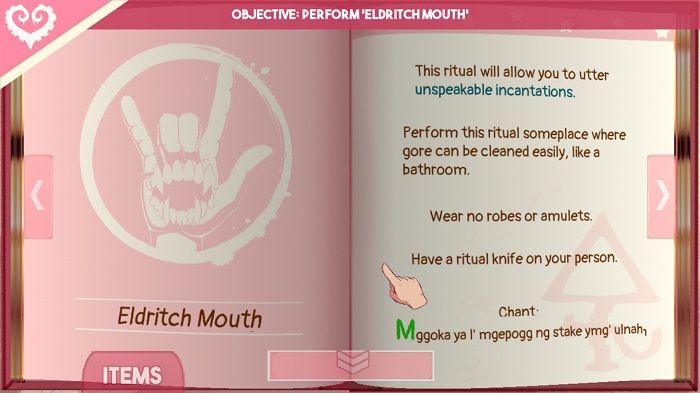 This is basically a point-and-click adventure game with dating sim trappings. There’s much more focus on interactive gameplay than in a standard visual novel. Most of the gameplay is slow-paced puzzle-solving. From time to time, however, the game demands you complete a ritual or task within a time limit. This leads to some legitimately tense moments. The puzzles themselves are pretty simple and straightforward. As long as you keep in mind what items you have on you and watch the environment, you’ll be fine for Ln’eta and Estir’s routes. Finding the three secrets required to unlock Nyanlathotep’s route is slightly more challenging, so you might want to check a wiki for Auntie Nyan Nyan.

I found a few typos, but the game is very well-written. It’s occasionally sweet, sometimes scary, and absolutely hilarious. Unfortunately, it’s not a very long game, with each chapter easily clearable in under an hour. They do all have multiple endings, however. Between the sheer amount of life put into each girl and the truly spooky atmosphere, there’s a lot of replay value. Also, basically every line is hilarious.

The art is firmly rooted in the aesthetics of both Lovecraftian horror and anime. The most obvious sign is the huge pink anime eyes perched on top of Ln’eta’s writhing tentacles. Estir and Nyanlathotep also combine cutesy anime features with callbacks to their true forms. Each girl has a unique color scheme and overall aesthetic inspired by the source material. 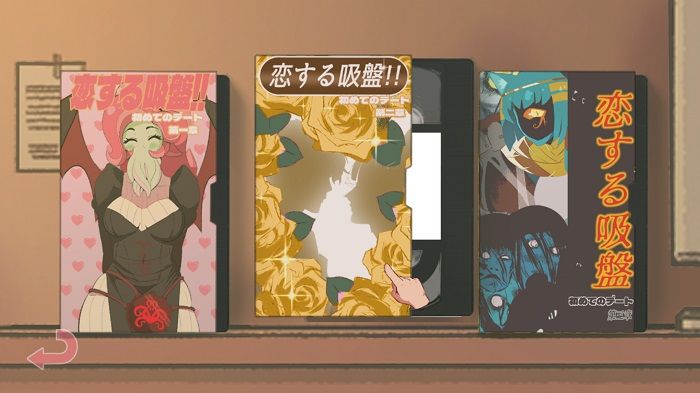 One of the major appeals, aside from the base premise, is the sound design. The expressive voice acting stands out here, with each girl having her own charm. Unfortunately, I ran into a glitch in Chapter 2 where the girls’ lines would not be voiced after completing a ritual. This dented the enjoyment some. Hearing Ln’eta, Estir, and Nyanlathotep’s reactions to the player’s increasingly deranged actions is half the fun. Ln’eta’s voice actress is great whether she’s being adorable, creeped out, or truly threatening. Estir’s voice is a little more annoying, but she’s still got her breathy appeal. However, Nyanlathotep’s voice actress absolutely steals the show with her mature and sinister delivery.

Sucker for Love: First Date may be a niche title with a weird premise, but it does that premise incredibly well. If you’re a fan of Lovecraftian horror and anime, or if you think dark romantic comedies are great, this game is for you. Akabaka’s weird creation definitely isn’t for everyone, but if it’s for you, you’re gonna love it. I know I did. 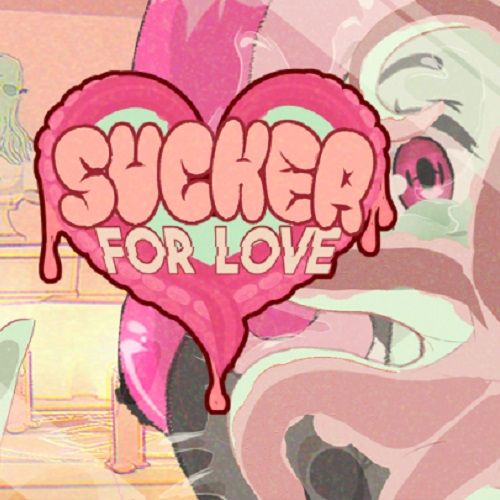