Action games of this nature normally hold little appeal for me. The frantic, relentless mashing of the attack buttons, the constant game over screens, the laser-like precision and dedication needed for success, none of this is in my wheelhouse. Now, don’t get me wrong: the Bayonetta series has all of these things in spades. However, these games are also sexy, fun and sublimely insane. Every single boss fight features at least one moment wherein you doubt what it was you just witnessed. Sometimes there are three or four of those moments in a row. If you haven’t played either game in the Bayonetta 1&2 combo pack, you totally should. Let’s dig into why!

Ah, the story. Somehow, this is the most ordinary part of these games. You play the Umbral Witch for which the series is named. The first game has you chasing fragments of memories in order to uncover your past and also stop the world from ending. The second game involves you rescuing a good friend from the depths of hell. Both games involve copious amounts of insane, over-the-top action, bombastic characters and demons made of hair. The first game’s narrative feels like a vehicle for the action, whereas the sequel has a bit more substance, story-wise. Although, both games really do put the action front and center.

“Bombastic insanity is pretty much the only setting for more or less every section of both of these games.”

You can’t talk about these games without touching on how ridiculous they both are. At one point, in the middle of a slow-motion ballet dance through a hailstorm of exploding debris, Bayonetta drops the lollipop from her mouth. Aghast, she leaps through the air, plummeting to the fiery ground before snatching the candy and landing delicately on her feet. Executing a cut-scene type special at the end of a boss fight is known as a Climax. They feature a lot of acrobatics, stylish posturing, impossible physics and fountains of monster gore. All executed with the usual level of charm. One scene has Bayonetta and Jeanne dueling using their respective foot-guns. Another boss fight has you power-slamming a three-headed beast into the ground until you’ve ripped two of its heads off. The point is, bombastic insanity is pretty much the only setting for more or less every section of both of these games. 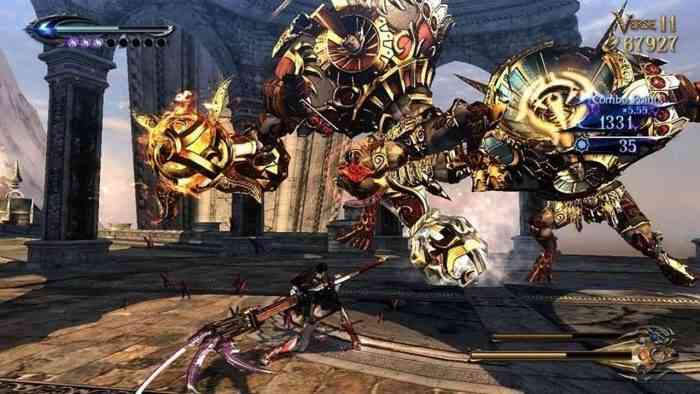 While there isn’t a ton of new content for this version of the games, there are some definite upsides to the Switch edition. amiibo support, and the instant access to the extra costumes this support entails, is a nice bonus. On top of that, there’s a local multiplayer option available in Bayonetta 2 known as Tag Climax. Finally, the games run with silky smoothness from start to finish. Overall, these aren’t tremendous advancements, but this is still a terrific set of games in their own right.

I’ve got no thumb for high-intensity action games, but I find myself compelled to continue when it comes to Bayonetta. Though the battles get tough and the setbacks get heavy, the combat’s design is such that you always feel like you’ve got one more try in you. Plus, the game’s infectious charm and bombastic tone make even the toughest sections much more digestible. Of course, these are comments best taken with a hearty grain of salt. If you’ve got the skillset for a game like Bayonetta, all of these battles will feel like calming walks in the park. Though, whether or not you find these games much of a challenge, the insane pacing and spectacle of the boss battles is enough to pull you forward from chapter to chapter. After all, you don’t want to shut it off without seeing what new heights (or depths) the next one achieves, right?

“Everything I’ve seen suggests that this is the version you want if you’ve never played any of the Bayonetta games before.”

Everything I’ve seen suggests that this is the version you want if you’ve never played any of the Bayonetta games before. Hell, even if you have, there are some compelling arguments to be made in favor of double-dipping. At the very least, the portability offered by the Switch is a major draw. The downside to this same portability is the screen real estate you’re working with. During some of the more intense action sequences, I found myself switching to docked mode in order to see what was actually happening on screen. Bayonetta’s combat systems have some real depth to them, but you need to be able to see what you’re doing. At least the gameplay stays nice and fluid in either mode. Also, I simply can’t recommend the touchscreen controls for either one of these titles. Maybe if you use them from the beginning they fail less frequently, but my experiments with the touchscreen mostly ended in violent failure. I’m sure some prodigy will end up beating both games on the hardest difficulty using the touch controls alone, however. These minor hiccups aside, you absolutely can’t go wrong with this version of Bayonetta 1&2. Assuming you have any taste for frenetic action games, these two titles represent the cream of the crop.

***Nintendo Switch codes for both games were provided by the publisher*** 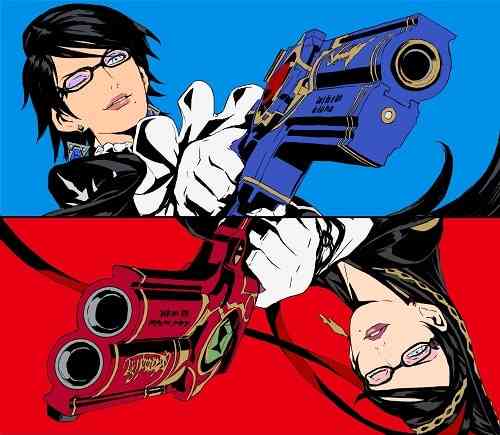