Bayonetta sort of defies description. Rather, you’re hard pressed to talk about these games without sounding like a deviant and/or lunatic. The constant fan service, the impossible escalations, the insane story, and the well-crafted action are all hallmarks at this point. If you’ve made it all the way to Bayonetta 3, you know what to expect. And thankfully, the latest game doesn’t disappoint. If you’ve been hoping for more of what you’ve come to love, you’re in luck! Bayonetta 3 has it in spades.

Note: I’m tap-dancing around a ton of tiny spoilers, so my apologies if the review seems weirdly vague at times. So much of this game is better experienced than read about, you know?

The story is another serving of the multiverse gumbo we’ve been feasting on for years now. Somehow, half a dozen franchises hit the multiverse button at roughly the same time. In Bayonetta 3, some entity called The Singularity is gobbling up universes to make the Alphaverse even stronger. There’s more, of course. But all you need to know is that Bayonetta has been roped into shutting down this mad campaign. The story is perfectly adequate, but it’s not the focus of my playthrough. It’s fine. We’re all here for the action, really. 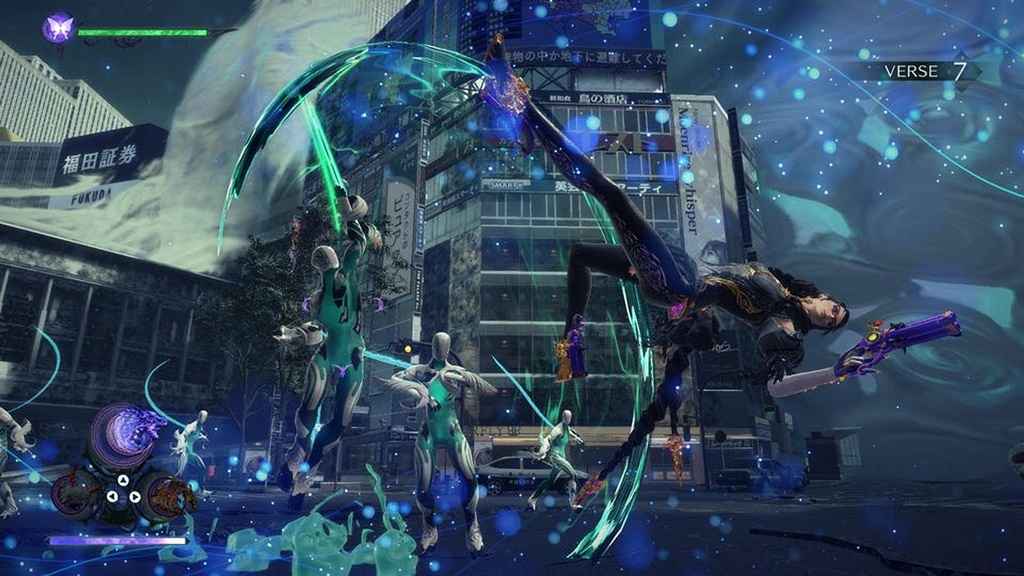 Said action is excellent, thankfully. You’ve got new demons to summon, as well as new weapons to mess with. Each summon comes with its own distinct set of moves, which had me switching things up frequently. The new weapons are even cooler. If you want more range, or heavier strikes, or better air combos, you’ve got options. Bayonetta’s expanded moveset alone is enough to encourage multiple playthroughs. To say nothing of Viola and Jeanne’s sections.

Playing as Jeanne changes things up completely. Suddenly, Bayonetta 3 is a side-scrolling stealth game? There’s only a handful of these stages, but they’re all delightful. Each one comes with an intro sequence that has me wanting an anime adaptation. The controls are fluid, the action is zippy, and the music is delightful. As a character, Jeanne is more of a legacy inclusion. You’re happy to see her, but she doesn’t blow open the gameplay loop. Viola makes a somewhat bigger dent in the usual flow of things.

Viola is a mystery. She’s also loud, fiery, and very fun to use. Her moves resemble Bayonetta’s, with some important distinctions. I found activating Witch Time with Viola a lot trickier, though her ranged attack makes up for it. You have to block instead of dodge, you see. That tiny shift threw me completely off course. I burned through a lot of healing items getting that new system locked down. For players looking for something new, Viola is mostly what you’re hoping for. Her personality is a big departure from Bayonetta’s confident wiles, yet her moveset is somewhat familiar. In spite of this, I found her sections to be a refreshing change of pace. 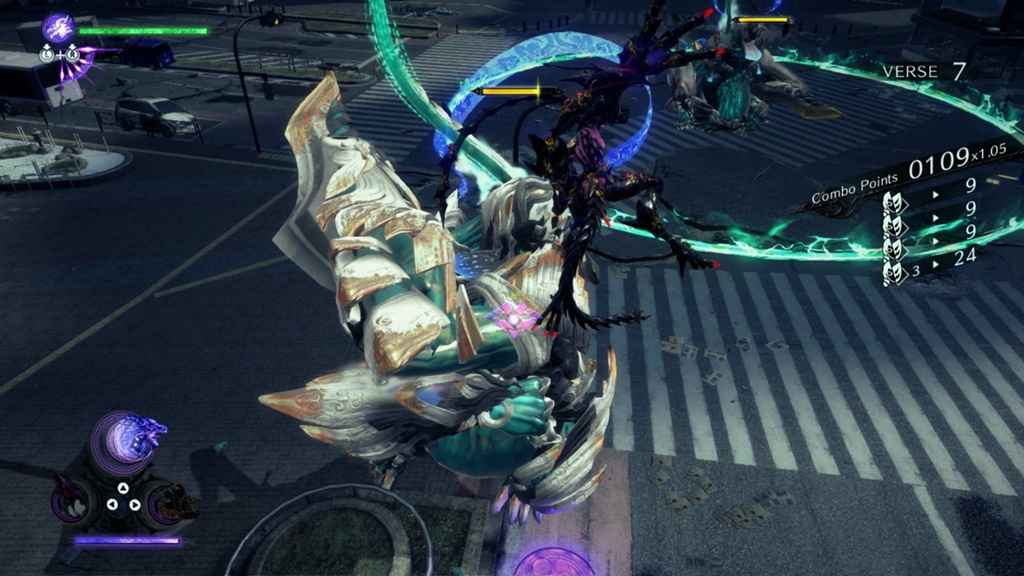 I’ve got a short attention span for action games like Bayonetta 3. Too much button mashing takes me right of it. Thankfully, this game has a remedy – move variety. You’ve got ranged strikes, light and heavy attacks, summons, dodges, parries, and Witch Time. On top of that, the game slowly feeds you new ways of implementing all of these techniques. Bayonetta may start as an all-powerful Time Witch, but I was constantly finding new ways to express this in battle. Whenever things got stale, I’d simply switch to one of the dozen different combat techniques I’d been taught.

Dance Them To Death

This series has a history of incredible, over the top boss fights. Bayonetta 3 proudly continues this tradition. There’s just something remarkable about seeing Bayonetta break into dance while a massive demon devours her foes. She gyrates, thrusts, and sashays her way to victory. It absolutely never gets old. If it all gets too steamy for you, there’s a ‘Naïve Angel’ mode you can turn on that keeps things relatively tame. Okay, so she’s less naked while performing the same lurid, fabulous moves, but it’s a start.

The animation in combat is nothing short of magnificent, though I did notice some hiccups during certain cut scenes. It’s nothing more than some artifacting and a few dropped frames, but it did stand out. Thankfully the combat itself is perfectly fluid. In terms of raw visuals, it seems like the devs spent all their energy on making sure Bayonetta looks amazing. And she does! The backgrounds are extremely okay, and the side characters look alright, but Bayonetta and crew look fantastic.

Attentive fans will notice that Bayonetta herself sounds a bit different. A new VA has taken over the role, which is a story I won’t get into here. I’ve got no complaints about the new voice, though some diehard fans may be shaken up by the change. If you find yourself dissatisfied with this new entry and you can’t figure out why, that might be it. Something to keep in mind, though not anything to really worry about.

Spicing Up The Grind

I’m a hard sell when it comes to Bayonetta. This brand of action game tends to drag for me, and Bayonetta 3 is no exception. After the fifth insane boss battle, I can’t help but feel numb, like my spectacle receptors have burnt out. It’s the same with the regular battles. After a couple dozen blazing battles with the latest seafoam menace, I start feeling antsy. I recognize that this is a personal problem with the subgenre, but it bears mentioning. Essentially, my issues with the first two games persist here. I get worn out from the relentless gameplay loop. But I have to acknowledge what the third game has managed to achieve. This is an excellent iteration of a very familiar formula.

Whether or not you enjoy this game is dependent on what you’re expecting from it. In the world of hypersexual, campy, insane action games, this sets a new standard. Every successive boss fight raises the bar, the action is always intense, and it oozes charm. There’s more move variety, the characters are beautiful, and the tone is impossibly over the top. If you’ve bounced off of Bayonetta games before, I can’t promise this time will be different. The pacing and core gameplay loop remain largely intact. But for fans of the franchise, Bayonetta 3 is easily as good as it gets. If you loved the first two games, you’ve got to check out this one. 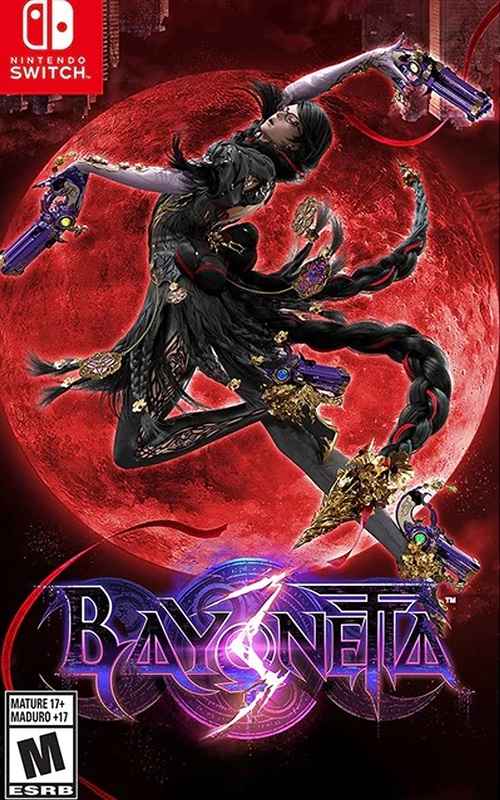