I’ve seen the first Bayonetta every once in a while when shopping for video games, but I never had a chance to play it because I did not own a PS3. So when Bayonetta 2 came out on Wii U I was very happy to finally get a chance to try the sequel. All I knew about the game was that the cover art looked cool and that was enough for me (She has guns on her shoes!). Nintendo and Platinum Games decided to add the original Bayonetta along side Bayonetta 2, and it still costs the same as a single game. Two for the price of one! This was definitely a good decision because the story of Bayonetta 2 makes almost no sense without playing the first one.

I decided to skip Bayonetta and go right into Bayonetta 2 so I could review it, and that was a bad decision. Bayonetta 2 jumps right into the story without introducing any of the backstory or characters (besides a very strange intro level, that talks about eyes and gods). I started the game in some strange clockwork-looking world and was quickly sent to a city with a short guy who liked to swear a lot. From there a group of jets swarmed me and I started fighting some angelic looking dudes while flying on a jet. It got weird very fast.

From what I gathered, you play as Bayonetta, which is a nickname she gave herself, who is an Umbra Witch. She fights the Angels of Paradiso and the Infernal Demons, but to complicate things a bit more she also has Infernal Demons that are allies. The game starts out quite quickly and you are sent on your quest. Even though I didn’t know the characters or understand the backdrop I still enjoyed the story. Slowly parts of it made sense as I figured out the background myself,and the quest that this game sends you on is enough to enjoy its interesting story. 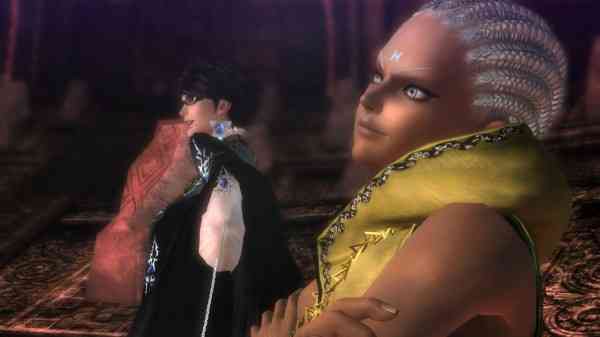 The gameplay itself is pretty simple. There are essentially three buttons to use in combat: A, B, and R. The two main attack buttons are A and B as they control Bayonetta’s hands and feet. By mixing the two attacks you are able to create combos to decimate your opponents. The Y button is used to shoot your gun and the R button is used to dodge attacks. If you dodge at just the right time you are able to enter something called “Witch Time” that slows time so you can hammer on your opponents without any retaliation. The controls are simple enough to be fun while also allowing for combos making it a bit more in-depth.

The combo system is quite expansive for the amount of buttons it uses. I only memorized a few combos but I was able to still do tons of damage to enemies. Some combos are simple, only needing to kick or punch a few times while others require six or seven button pushes with breaks in between. The fact that there are only two buttons involved in most combos makes it really accessible and easy to memorize. Combos are very important too! When I started the game all I did was mash buttons randomly and it would take forever to kill bosses, but when I learned some combos it all clicked together much better.

The single player mode is very enjoyable, if a little bit repetitive at times. The enemies are very well designed, but at times it felt like I was fighting a lot of the same thing. I didn’t find there was much strategy to it either; I just used my combos in their faces until they died and then moved onto to the next weird looking Angel or Demon.  A lot of the cutscenes have this really cool style where they take place behind a clock, and are essentially still images with voice acting over top of them. The clock turns to change the scene; it’s a small thing but I found it really interesting, 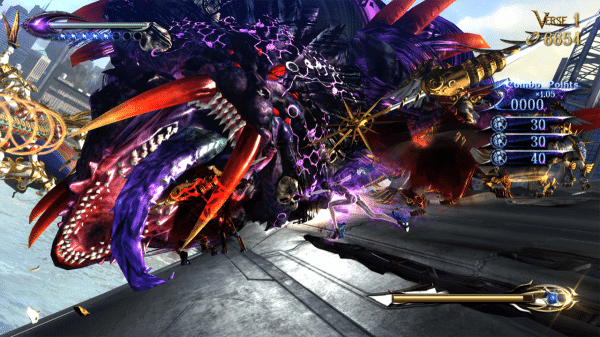 There is a shop in the game, called “The Gates Of Hell” where you can buy new combos, weapons, and consumables. I purchased a pair of swords to replace my gun-boots, giving me sword-boots, and a couple new cool combos. It was sort of a cool touch to the game but I didn’t feel like it added that much value. In fact, going to the shop in the middle of a level felt unnecessary and slowed unnecessarily breaks up the game’s pacing.

The boss fights are quite fun. Bosses are huge and feel very menacing, and even with the size difference I still felt like my attacks were doing damage. As the bosses took hits from me and I felt incredibly powerful every time. Of course given that this is a Platinum Game developed title, be prepared for some pretty “original” bosses as they let their imagination run wild

Simply put, the graphics are just beautiful. The art is really awesome and quite unique. I like the design of the Angels of Paradiso, they are sort of humanoid, and where you would assume angels would be holy and have a happy feel they are actually quite creepy. One guy has a face on his shield and it talks. It yelled at me. The Infernal Demons look like strange mechanical beings mixed with evil creatures. The Angels are white and gold while the Demons are black and red. Before each fight there is a cool little graphic that comes up telling you the name of your enemy; it’s a small feature but is cool to know what I’m fighting. 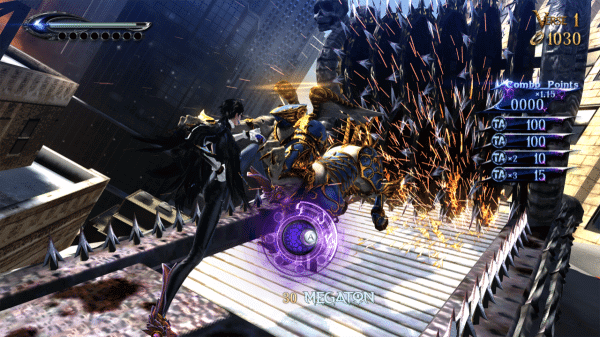 The music almost juxtaposes the feel of the actual gameplay. I don’t know how to explain it, but it almost feels opposite to the idea of killing Angels and Demons. That’s what makes it so awesome. It ramps up and has a high energy during the ‘beat-em’ up phases of the game and keeps the pace going. It has a female voice, which fits well with the female protagonist and it matches her personality as well. The music is honestly one of my favorite parts of this game. It’s really catchy and interesting. This is one soundtrack I’d love to own.

The voice acting is well done too, but the script can be cheesy at times. The short guy that likes to swear a lot, I’m pretty sure he dropped about 5 F-bombs in the first cutscene alone. All of the dialogue in the game is spoken, which is good even when it is cheesy.  The sound effects really add to the experience. In a game where beating up monsters is the only gameplay feature, you have to feel good about all the punches and kicks you do. Each hit sounds like it would inflict damage, which makes you feel powerful. The sound effect of each attack could make or break this type of game, and in this case it really sells that the attack is real. It makes it believable that a human sized witch could take on a 6 story tall behemoth and win.

Bayonetta 2 is a solid game. It utilizes a simple yet interesting combo system, the visuals are gorgeous as they highlight your attacks and the enemies you battle, and the music and sound effects are top notch too. Although gameplay can be repetitive it still can be fun. What I did note though was that after the initial play through I can’t see too much replay value. At the end of the day if you are an action game fan and enjoy an interesting plot and creative art style then Bayonetta 2 is a good fit for you. The fact that when you buy this game you also get the first game too is a huge bonus as it’s the same price as buying a single game.