Thirty years is a long time to wait between installments for one of the most notable RPG franchises in gaming history. Sure, there was a revisit of sorts in 2004 with a version of The Bard’s Tale, but that wasn’t a direct sequel or even a remake. And, yes, VR owners did get a chance to get back into the “proper” lore with last year’s The Mage’s Tale, which set the stage nicely for The Bard’s Tale IV: Barrows Deep. With such a big gap in time between the last main chapter of the story, will it be able to not only connect with the nostalgia factor but also keep things up to date for modern gamers?

The game takes place over a century after the destruction of Skara Brae. Once again a new power is being drawn to the rift and it will be up to another band of adventurers to stop them. Now that is the vaguest description possible for the story, but I certainly don’t want to spoil any of it. The story is wonderfully crafted, and those who did get to enjoy The Mage’s Tale get their tie-in. If you don’t have VR or missed that one, don’t worry, it’s not anything that you need to know to follow along with the story, just consider it extra lore.

If there are any complaints in the story department, it’s not actually with the narrative itself, but rather the game’s initial loading screen, which actually spoils some of the story from time to time. The loading screen is a pretty wonderful recreation of the original cover art for the game, with the Bard singing the tale of the particular quest you are on in the game. It’s very cool and a wonderful touch, but it also accidentally gives out a plot point or two, whoops! Maybe I genuinely missed that information up to that point and it wasn’t anything story destroying, but that Bard seemed to have just a slight bit more information than I did at times. Again, nothing major, but if you don’t want any spoilers at all, it’s something to be aware of.

To Turn or Not to Turn?

Probably the biggest question I had going in was the combat. How would the turn-based combat of the previous titles work today? What we get is a very interesting combination of action and turn-based combat. The world is very much a modern, first-person dungeon crawler. The enemies can be seen, but instead of just hacking away like an action game, you can either charge the enemy or be spotted by them (and yes, you can actually sneak past them as well). It is an interesting take as it does add some action, but still keeps more traditional turn-based combat after that initial action that winds up being used for deciding who starts the attack first. 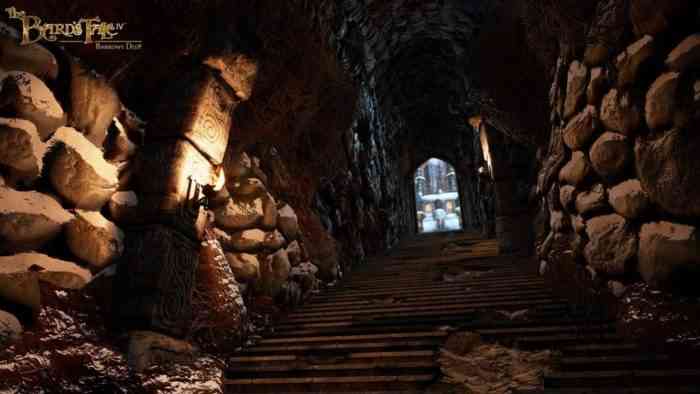 It’s not boring turn-based combat, either. There can be quite a lot going on, with some serious strategy involved further in the game. Due to some poor planning on my part, I spent a good chunk of time with no Fighter in my party. Despite this, I was still able to take on the challenges, just with a whole lot of strategy (and even then it was usually by the skin of my teeth). The battles play out on a grid of 16 squares, 2 rows of 4 squares per side, enemies at the top of the screen, heroes at the bottom. This obviously allows for some movement, tactics style. It may take a little time for it to sink in however that there are only 4 squares per row for your heroes and you can actually cross to the other side. That may sound silly, but the reason is that the action bar is there in the middle of your team. To keep things from being cluttered, the 4 x 4 squares are more of a slight trapezoid shape. Given the orientation, it works well for depth and distance—it just may take a little while to realize that there really are only 4 squares each in the bottom 2 rows, and you can move between all of them.

The good really outweighs the bad in The Bard’s Tale IV: Barrows Deep, but there just a few other things worth mentioning in that could be better, and it has to do with performance. The load times were fairly lengthy and I did encounter a few stutters in game world while using a machine that is well above the recommended specs. UE4 games seem to have a tendency to take a long time to load in general, so comes with the territory. But that also means that like most UE4 titles, it looks really good too. I absolutely loved the look of the game. The sound and the music are excellent as well. Can’t have a game called Bard’s Tale without good music, now can you?

There is so much going on that is good that it’s hard to even mention it all. You start with plenty of customization options, not just with character creation, but within classes and skills. All told there are somewhere between sixty to seventy skills per class. I haven’t even mentioned the puzzles, which I found to be just the right mix of difficult, neither boring nor too hard. The story is great, even with the occasional self-spoiler. Combat has a lot going for it and keeps things interesting, but it’s always possible that not everyone feels that way on that front. The few performance issues aside, it’s a game that’s hard not to like. Interestingly enough, prior to release InXile Entertainment CEO Brian Fargo said that if The Bard’s Tale IV sells over two million copies over the first eighteen months he’ll attempt to buy back Interplay. Is this a two million seller over the next year and a half? It very well may be.