If I was to refer to 2017 as the re-age, I think we could all come to a consensus that it’s a fairly accurate statement. Remaster, reimagining, reboot, remake, however, you want to put it, it’s become the new status quo. Case in point, the movie It, a remake of an adaptation, is currently annihilating box office records. Enter Baja: Edge of Control HD, an HD remaster of a game released way back in 2008 that’s made its way back to consoles. I’ll forgive you if you don’t recall it making a splash nearly 10 years ago because I definitely did not. So, you can imagine how pleasantly surprised I was to find a solid, big, and pretty fun game dropped into my lap that looks damn good for a game older than my nephew.

Edge of Control is an off-road racing game that takes its name from the real world Baja race, so you get to race through a lot of desert in this one. Edge of Control doesn’t just want to throw you into a race you can simply watch though, scattering race tracks into a variety of locales that have you dodging trees and splashing through water as well as barrelling across a sandy mesa. As per usual, there are a number of off-road vehicles to choose from that have different stats as well as unlockables skins that alter the stats as well. Additionally, there’s nearly a hundred tracks to race across in several courses. You can also explore a few of these courses in an open world setting if you just want to go and get a feel for a vehicle… or see how much air you can get before you explode. Either way.

This is the strength of Baja – how much you can play. In addition to everything I’ve stated above, there’s also a bunch of different ways to play. Do a circuit race or play through your career. Do a mountain climb or play online. Or, do any of them with friends as you can play with up to three friends. Maybe it’s because I don’t play many racing games but I’m unaccustomed to being offered such a variety of ways to play. I cruised around the Painted Desert map, practicing my handbrake turns and flying off of cliffs for a half hour before a friend sat down and we did a couple of hill climb races before I moved on to my career after he left, all in a single sitting and none of it felt redundant.

“It looks pretty, it’s fun to play, and you can play whichever way is the most fun for you or your friends.”

There was a feeling of redundancy, however, when you scroll through the maps looking for a map to race. Yes, there are close to a hundred, but after you unlock a few, you kind of feel like you’ve raced that track before. Basically, the only real difference between the maps is the shape of the track. I’m almost positive it’s even over the same ground, just a couple of different turns to spice things up. If I’m being completely honest, I really didn’t notice much of a difference between the vehicles either. There is a difference between the handling of the custom truck or the dune buggy for certain, but within each of those types, I didn’t really notice much difference than some new paint when you unlocked the vehicles.

With respect to the actual racing aspects, Baja doesn’t just let you barrel through with the pedal to the metal. It forces you to take into account of the track and the durability of your vehicle. For instance, on a hill climb, come over the top too quickly and you’re going to have a bad time. Or in a circuit race, you’re forced to stay on the track, so you can’t just floor it through a turn and cut the corner. The game forces you to actually race and learn how to best play the races. Even with the AI turned all the way down, I still had trouble placing at the top. In fact, if I averaged it out, I probably finished 3rd more than anything else which frustrated the compulsive side of me, though it is a testament to the competitive nature of the game. 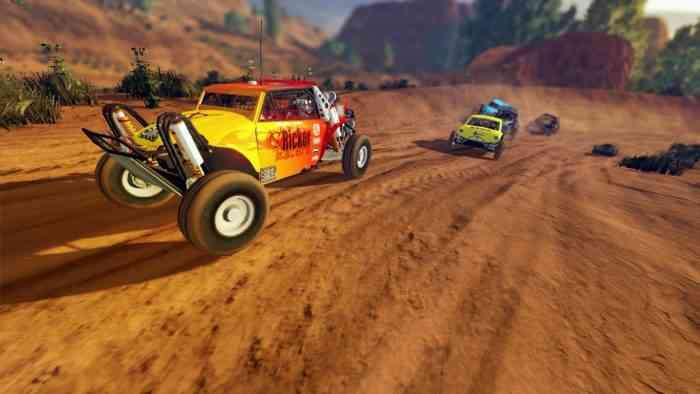 As for the remaster aspect of Baja, they did a bang-up job putting a fresh coat of paint on the game! If I didn’t know better, I would have thought it was a new game not a decade old release. Yes, there are some telltale signs like the edge of the map is a different color than where you can race, but it did feel like a new game. The physics are a bit wonky in a few places, like using the handbrake through a turn, getting hit and being sent flying, but for the most part, the remaster is crisp, clean, and very well done. The biggest question that arises is that if the game got middling reviews to begin with and seems to have flown under the radar pretty well, who did Nordic think was clambering for a new edition of it?

Overall, Baja: Edge of Control is a remaster that has held up over the years though it is kind of baffling as to why we’re getting a new version in the first place. With a ton of ways to play and a spiffy new upgrade, Edge of Control is a lot of fun and held my attention better than many other racing games. Though the amount of maps is a little misleading as they all sort of blend together, much like the vehicles, the types of races are all fun as well as having a challenging AI. It looks pretty, it’s fun to play, and you can play whichever way is the most fun for you or your friends. In the age of redoing everything, sometimes it’s strange what gets chosen to get a redo. Even when the answer isn’t so clear, at least there’s some enjoyment to be had out of it.