Attack on Titan 2 Review – Too Much More of The Same

As a fan of the anime Attack on Titan, this game was an absolute must for me to pick up. With epic titan killing in all its glory, it just seemed so right. But how does Attack on Titan 2 compare to my expectations? Let’s just say, hype doesn’t necessarily spell success.

If you’re unfamiliar with the anime, it follows the story of Eren, Armin and Mikasa, a group of friends who lost their loved ones in an attack on the city by these beasts called titans. What was once a peaceful city for children to laugh and play in has now become what nightmares are made of. Eren, Mikasa and Armin have vowed to avenge their parents death and to stop the invasion of the titans by any means necessary. Of course, with great responsibility comes an even greater sacrifice. This is something that the three will soon find out as they train to be amongst the elite squad of individuals tasked with the protection of the citizens and eradication of the titan race.

“There’s no denying that Attack on Titan 2 looks kickass, with graphics that rival the anime itself.”

Usually, I try not to ruin the story for you, but whether you’ve seen the first season of the anime series the game is named after or you’ve played the original game, you’re not really in for much of a surprise here. After the epic ending to the first game, which I’m not going to spoil here, it’s hard not to get excited for what’s to come. Unfortunately, the story of Attack on Titan 2 does a complete 180, and is almost identical to that of the first game. Well, save for the different titan abilities, epic boss battles, and your own customizable character anyway. Rather than play the game as Eren and his loveable, if not at times slightly pitiful, cast of characters, you get to join in as a spectator. But don’t expect to receive too many details of the character you join in as, because other than a few vague descriptors throughout the game half the time it’ll feel like you don’t even exist. Sure you get to play just as much as you did in the first game, however, this time you get to view Eren, Armin, and even Levi and Annie with your own eyes. How is this different from the anime you ask? It really isn’t.

I’m almost at a loss for words by how let down I feel after playing through what I thought would be a sequel. The more I played, the more hopeful I felt that the recap would end and I’d crack open the whole new world of Season 2. Attack on Titan 2 instead offers more depth to the first game, allowing insights into some of the characters like never before. Along with that, it also offers a small original storyline where your character is concerned. For those who haven’t played the first game, or watched the anime, this will be a whole new world, and an exciting one at that, however, if you’re familiar with either one you’ll be feeling a heavy dose of deja vu. 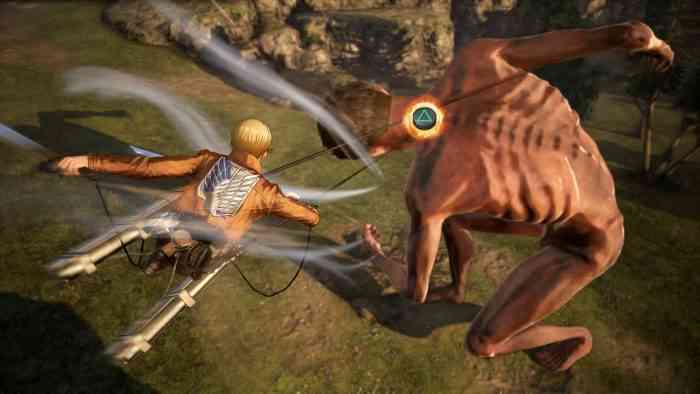 Though the story, or lack thereof, is a disappointing one for someone who has played the first game and watched the first season of the anime, I can’t say the action of killing titans doesn’t get the blood pumping every time. Hell even when you’re getting your ass beat it still feels exciting. Interestingly this is what drove me to keep playing through the story because as my frustration built over the lacklustre and uninspiring plot, so did my desire to slice and dice whenever and wherever possible. Plus, who doesn’t love the satisfaction that comes only after beating the most difficult boss battles of the game? And despite the lack of innovation with the story, there are some huge additions here that definitely amp up the replayability value of this sequel. From player customization to two online game modes, and a complete overhaul of the games interface, Omega Force really put all their effort into making the game more than just a replay of the anime series.

Thankfully the story for Attack on Titan 2 is not the only thing there is to do here. There are also two other game types that can be unlocked by first playing a couple levels of the story. The first is offline play, which is simply a variation of the missions of the story. This is almost a practice mode, or where you’d go just if you just wanted to play casually. Then there are two online game modes where you party up with friends and strangers alike to team up for the ultimate bloodbath those titans just didn’t see coming. Whether it’s the 4v4 competitive mode or the cooperative mode, both are fun in their own right, adding variability to a game that Attack on Titan 2 would otherwise lack.

“Overall Attack on Titan 2 is disappointing as a sequel.”

One huge thing of note is to take your difficulty and skill into consideration before beginning the story. Believe me, there is a huge difference between easy, normal, and hard, and it’s not just the spelling. Easy grants you kills that just aren’t plausible if you play on the normal or hard difficulties, and should be chosen for the more casual player. Normal cranks up the heat significantly adding in all kinds of frustration surrounding angry titans that grab the player way more often than on easy, and all while you try to make your strikes that much more precise. Players will also find that blades break way faster and your gas tanks don’t last as long on both of the higher difficulties. What I found most frustrating about the difficulty however is when it came time to take down the large abnormal titans. Though you’re supposed to attack the areas that are highlighted green, I often felt like I just couldn’t make much progress at any given time. Of course if normal seems like hell, you can only imagine what hard feels like. Props to you if you can master the game on hard mode because you’ll likely have given half your mind and soul to trying to defeat it!

Though the controls in Attack on Titan 2 aren’t overly complicated, it’s worth paying attention to the training that’s offered at the beginning. After all, this could make the difference between getting eaten by a titan and standing above their mangled corpse. Just like in the anime players will swing between buildings and hack and slash at the monsters that threaten their very existence. This sequel comes complete with a brand new ability as well that makes the titan kills that much better. This ability is called stealth kill and it requires you to scope out the titans using some sort of binoculars. If you’re successful you’ll go flying through the air at top speed towards an unsuspecting titan. More often than not if the attack is timed right, players will be rewarded with epic kill cams. Be careful though because it’s entirely possible to be seen by the titan, throwing them into a rage with their gaze set solely on you. 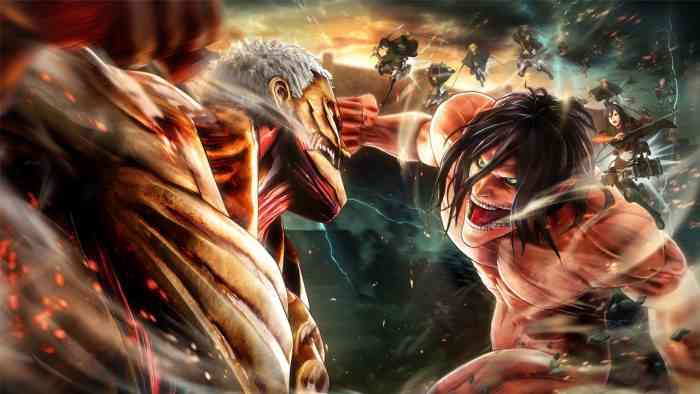 There’s no denying that Attack on Titan 2 looks kickass, with graphics that rival the anime itself. From the rooftops to the titans and everything in between, this game is gorgeous. Of course, even with such beauty, nothing really compares to how well the cutscenes are put together. The subtitles and severity of the game are captured each and every time here, you really don’t want to skip them. With that said, there are some bugs that rear their ugly heads more often than they should. From Titans getting stuck in buildings and invisible trees that get in the way of your attacks, to the complete inability to get up from the ground to the building at times, there are a few things that need to be fixed here. Thankfully, these are small issues in the grand scheme of things that should be just a patch away from perfection. As for the sound, Omega Force took the criticism of the first game and revamped the music to make it just as epic as the titan kills themselves. The voice acting is unsurprisingly on point, rounding out a game that is both amazing to look at and to listen to.

Overall Attack on Titan 2 is disappointing as a sequel. Despite the fact that there are a bunch of new features that add a ton of replayability, for those that have come to play because of their love of the anime series or the first game, prepare to be confused. On the flip side, if you’re a newcomer to the whole series, you’ll find this game is definitely one to add to your collection. Even without an inspiring story this time around, Attack on Titan 2 does maintain its enjoyability all the way through, and that in itself does outway the negatives here. After all, it does come with quite a range of improvements over the original game, and that is worth celebrating. 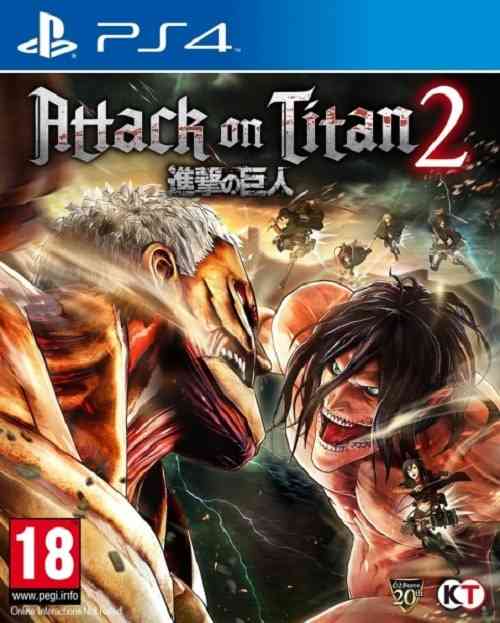 Marvel’s Avengers Support Will Discontinue In Late September This Year
Next Shiny Review – Not Bright Like a Diamond
Previous Yakuza 6: The Song of Life Review – Kiryu’s Swan Song Hits the Right Notes