Arena of Valor Review – A Brilliant MOBA for Switch

The MOBA comes home as Arena of Valor officially launches on the Nintendo Switch. This genre has been making waves on the PC for some time now, with League of Legends and DOTA 2 leading the charge. Console MOBAs have been a little more suspect, but Tencent has nailed it with Arena of Valor. This Nintendo Switch version could be the port to catapult an already popular mobile game into the stratosphere, as its easy controls and intense action make for wonderful pick-up-and-play sessions.

A standard Arena of Valor match plays like a standard MOBA: two teams of five characters try to destroy the opposing team’s Core, destroying smaller towers along the way. Tiny NPCs called minions support the teams, while wild creatures in the “jungle” areas offer buffs to those who can defeat them. The first time to take out the other team’s Core wins the day. Pretty standard stuff, so on the surface Arena of Valor doesn’t seem too notable.

Once I started to dig into this Switch port, however, the true marvel of the game presented itself. This game distills the MOBA feel to the console perfectly, from the easy “hold button, press ability button to upgrade” method to the Shop being available with the left arrow. I can set everything to auto-update in the beginning so I can get my bearings on the controls, then immediately change it to manual upgrade once I’m more comfortable. I never feel too over my head, which is impressive for a game like AoV.

The beginning tutorial does a terrific job of teaching me not only AoV, but the MOBA genre in general. I felt like I had a grasp on the format very quickly, giving me the confidence to jump headfirst into ranked matches. Maybe it’s because the second hero I unlocked, the warrior Zanis, fits my playing style, but I started winning matches fast. That’s definitely a great way to keep someone playing, though it didn’t take long for the challenge to ramp up. 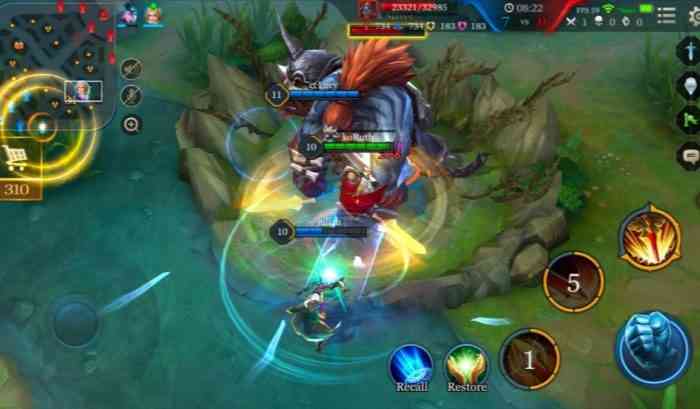 The six class types will fit any player’s preferences, from the magic-based Mages to the damage-soaking Tanks, the attack-heavy Warriors to the long-range Marksman, all the way down to Medics and Support classes. There are dozens of heroes to choose from at the jump, in fact the entire roster of heroes is available for a short time right from the get-go, but I quickly found two or three that suited me best. The allowance of trial and error from match to match without punishment is key in me finding my preferred style, and I appreciated being able to experiment.

The one issue I did have with this Switch port of AoV is purely aesthetic, but it’s a big one: lag times and low connection speeds are killer in a competitive game like this. The Switch performs well for the most part, but there are a few times during heavy action where I’d see some frames drop pretty noticeably. Connection speeds over Wi-Fi were alright, usually in the 55-65 millisecond range, but a few times I’d see that number creep up.

It’s fairly obvious why this is such an issue for Arena of Valor: without steady frame rates or a reliable online connection, playing this predominantly competitive game will be severely impacted. I saw multiple moments where I had the upper hand against an opposing hero, only to suddenly be dead when the frame rate adjusted properly. It’s one thing to lose fair and square to an enemy, it’s another when I die because the game couldn’t keep up. 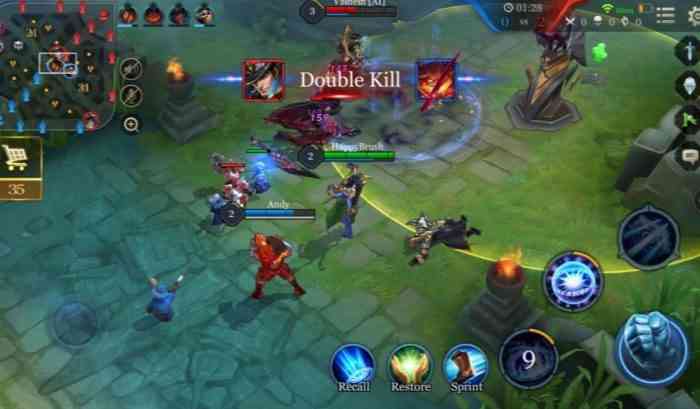 These issues were mostly noticeable when the Switch was docked, however, my handheld experience was much smoother. Arena of Valor was a mobile game to begin with, but the difference between playing on my phone and playing on the Switch’s big screen is night and day. The graphical errors subside as well, with the framerate dropping much less frequently as I played on the go. I imagine the game was optimized for handheld as it’s a mobile port, but whatever the reason AoV’s handheld mode is great.

Aesthetics aside, Arena of Valor sets a very high bar for MOBAs on consoles with its easy control scheme and competitive gameplay. This is as close to the authentic LoL/DOTA 2 experience as a home console has gotten so far, and I’m excited to see the game grow and prosper on the Switch. The MOBA might have found a new home on the Nintendo Switch, and Arena of Valor started it all.

Jimmy Fallon Is Coming to Fortnite
Next Creed: Rise to Glory Review – It’s The Eye of the Tiger
Previous The Conjuring House Review – Conjuring up an Unfinished Scarefest