Don’t be worried, though, I like it that way. Spooky stuff is kind of my jam. On an average night, you can find me curled up with a warm tea browsing the (surprisingly active) Lovecraft subreddit, discussing how accurate the narrator’s descriptions of the Great Old Ones are. Lovecraft’s works are hugely influential and the folks over at Frictional Games must have got a dose of the crawling madness when they sat down to create the Amnesia series of games because it’s absolutely dripping with Lovecraftian tropes.

I’m sure you know that already, though. These games have been out for a hot minute over on PC but the recently released Amnesia Collection marks the first time the series has been playable on console giving those bound to their living room televisions a chance to stare into the darkness. The package contains both Amnesia games, and the Justine DLC, which is a solid bundle for the price they’re asking. I wonder if this means we’ll be subjected to another couple years of streamers screaming into their microphones.

“I’ve heard the chorus of “scariest game of all time,” I’ve seen the countless accolades, and I came into the games wanting to like them, wanting them to terrify me.”

Probably not, because until the other day I too was one of the uninitiated, and while playing through Amnesia: The Dark Descent and it’s sequel Amnesia: A Machine for Pigs, not so much as a gasp left my lips. I’ve heard the chorus of “scariest game of all time,” I’ve seen the countless accolades, and I came into the games wanting to like them, wanting them to terrify me. I think I missed my window though because these titles just don’t hold up well, and maybe that’s obvious. I mean they are over six years old.

Amnesia: The Dark Descent, if you’ve somehow stayed ignorant, takes place in the twisting and labyrinthine halls of Brennenburg castle. Your character (Daniel) wakes up within the cold walls of the keep rocking a wicked case of amnesia and as he learns what the true nature of reality is, so will you. The mystery of the castle and what exactly Daniel was doing before he woke up there will be revealed over time through the numerous journal pages and flashbacks that you’ll come across that flesh out the mostly ham-fisted backstory. There are some spooky passages but for the most part, they’re bits of corny voice acting that don’t land with the gravitas they were hoping for. 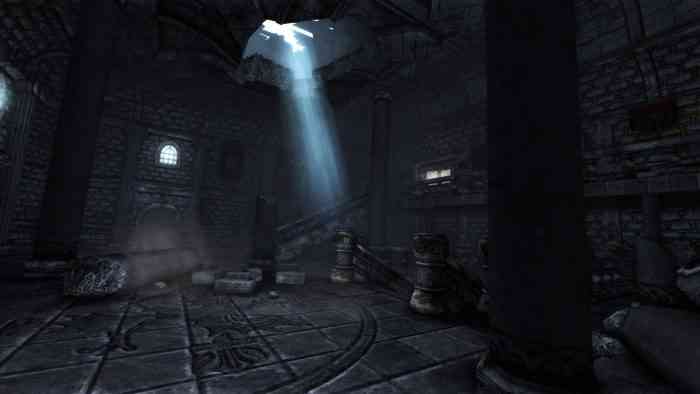 A lot has changed in six years and the quality of the stuff seen in Amnesia just doesn’t pass anymore. This package really would have benefitted from some touched up visuals or something because I found the smudgy, vaseline covered walls and floors more distracting than I care to admit. When playing a game that is supposed to be as immersive as Amnesia wants to be, the graphical fidelity needs to be there. I can only walk around the same looking rooms with the same repeating textures for so long before the seams of the game start to show, and once they show you begin to see them everywhere. I don’t want to bag on the game too much for its visuals because I’m holding it up against an impossible standard but be warned, this game looks old.

“Almost everything worth saying has already been said about the Amnesia games and people have been saying these things for years.”

The controls are less than ideal on a gamepad too. There is a trade-off you need to make at some point: Do you want to be able to look around fluidly or do you want to pick things up without much hassle? The game is super finicky about interacting with the environment. Not a problem if you’re playing with a mouse but… yeah. It doesn’t break the game, but it’s a constant bother.

Almost everything worth saying has already been said about the Amnesia games and people have been saying these things for years. That might be indicative of the problem, though. That stuff was said years ago, in a different time. I don’t like raining on anyone’s parade but it seems hard to believe that anyone will be scared by this stuff these days. It’s all so… hokey. But if you’re just itching to see what the commotion was all about with this series, and you can do so with a sensible understanding of context, the Amnesia Collection might be worth the investment.

The Dark Pictures Anthology: The Devil In Me Trailer Shows Off Characters
Next RIFT: Starfall Prophecy Review – The Most Enticing Expansion Telara Has Produced in Years
Previous Dead Rising 4 Review – No Story Coop, No Problem