Alien: Isolation Review – Getting Everything Right That Colonial Marines Got Wrong

Through no fault of its own, Alien: Isolation had a lot to prove right out of the gate. Critics were universally disappointed with the last attempt at incorporating the ‘Alien’ franchise into a video game experience with Aliens: Colonial Marines from Borderlands developer Gearbox.  It was an over the top shooter that was force fed to the brim with fan service and despite its best attempt completely failed to capture any of the magic that made the movie quadrilogy such a success. I’m happy to report that Alien: Isolation doesn’t suffer the same fate as its predecessor. Developer Creative Assembly has done the best job possible in recreating the atmosphere and intensity of the films.

Based on Ridley Scott’s 1979 horror/science fiction masterpiece it tells the story between Alien and its sequel Aliens. Amanda Ripley, daughter of Sigourney Weaver’s character, Ellen Ripley, has been dispatched to the space station Sevastopol to investigate the disappearance of her mother some 15 years previous. Weyland-Yutani has received some information on the flight recorder from Ellen Ripley’s ship, the Nostromo, and Amanda simply has to pick it up. As you can imagine it doesn’t take long for the proverbial shit to hit the fan and for Amanda to be stranded all alone (well not really alone) left to fend for herself.

When the player is first introduced to Amanda they’ll easily be able to draw the connection to her mother. She’s tough, quick with the sarcasm and she won’t take crap from anyone. How’s that for bucking the female trope in video games? As a protagonist I found her to be strong and compelling even if she spends 90% of the game being completely helpless and running in fear. If it were me in her shoes I’d have spent 99% of the time hiding in a corner shitting my Underoos. While I initially had my doubts about using Amanda as the lead they were quickly washed away. 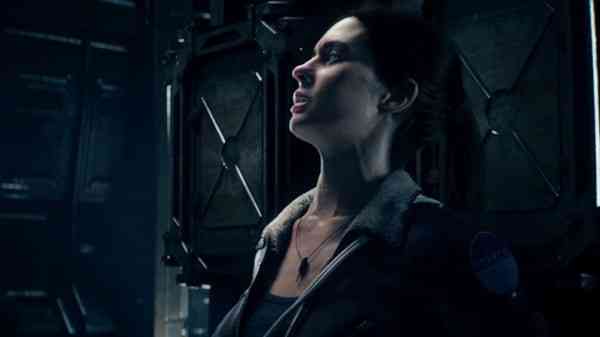 The key to recreating Alien in the proper fashion is in suspense and in atmosphere and Creative Assembly succeeds at this in spades. The space station Sevastopol is a total wreck with danger lurking around every corner. It’s dark with sparks flying and lights flashing in all the right places to successfully mimic the ‘this is the future as we saw it in the 70’s’ vibe of the original film. If anything I’d say that this is the single best part of the game as a whole. The lighting not only set the scene perfectly but helped create some of the tensest moments in the game. A swinging light combined with a piece of garbage blowing across a floor can play tricks on your mind. In the case of a sissy like me it sent me high tailing it back the way I came on many occasions.

The game’s sound helps up the ante even further and some would argue that it trumps the lighting and visuals. From the whir of giant wall computers to the strange sound of silence in space these sounds are masterfully used to their fullest potential. A game can live or die, fail or succeed, based on its sound and the team at C.A. put painstaking detail into it here to ensure that success. Working together, the gorgeous visuals and atmospheric sounds, they create, or recreate as it were, the terrifying feeling of being hunted and being helpless to do anything about it. It was these elements working in tandem that drew me into this world more than any other. I was outright terrified at times while trying to hold my breath inside a locker (a futile exercise might I add, I got caught every damn time) as H.R. Giger’s beast attempted to sniff me out.

Where Alien: Isolation got it right, and Colonial Marines got it wrong, is that the human race is far inferior to the killing machine that is the Xenomorph (THE alien). This isn’t some creature you can pump a couple rounds into and be done with. It can kill you, it will kill you, and all you can do is avoid it or escape from it. Easier said than done. The Xenomorph is a hunter and trying to learn its movements is an exercise in futility. When asked about the alien AI at E3 this year the dev team told us that it’s adaptive and it learns from the players actions. It will learn to find your hiding spots, it will hear you, and it will smell your fear. I’m not sure if this is so much true as it is a programmed progression of the AI giving that impression but there’s no doubt that you will get caught and gored through a lot. There was more than one time where I thought I could get away clean and the alien would randomly turn and be on the chase. Time and patience are a necessity to survive this 16 hour or so space epic. 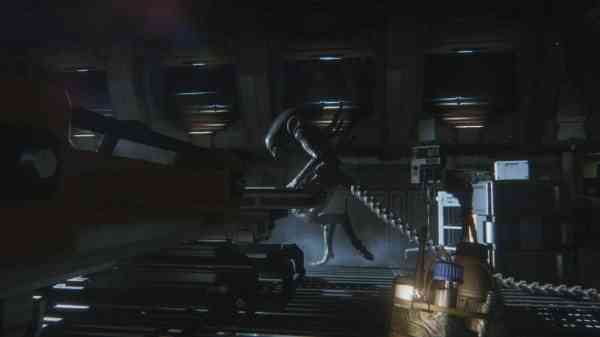 Obviously the alien is the alpha predator in Alien: Isolation but we can’t forget about the humans you’ll come across as well as the overly helpful Average Joe humanoid robots. Just like the alien they are best avoided at all times. It seems like everything on Sevastopol is out to kill you and it’s mostly true. Aside from a few helpful characters you are horribly alone. The humans left on the station are scared and if they see you they shoot first and ask questions never. More often than not you’re left scurrying away hoping that their gunshots didn’t draw the beast with them. As mentioned, it’s best to avoid at all costs. Sure you’ll get a shotgun at one point but you’ll never have more than a couple shells to fire with it.

Like any good survival horror the focus is on managing your VERY limited supplies. You can track out blueprints and learn to make items like medkits and EMP grenades by collecting parts all around the station but everything is in short supply. You’ll have to be smart about how and when you use these items and possibly even have to learn to survive without them if you happen to miss the blueprints! Also in short supply are the save points in the game. It’s an old school mechanic that fits well with the theme of the game as a whole. Using the motion tracker becomes paramount to getting yourself out of sticky situations as does the use of noisemakers, or other humans even, as distractions. If you’ve followed along so far it all adds up to this: humans want to kill you, robots want to kill you, an alien wants to kill you and you have next to nothing apart from your own wits to make it out alive. This is the recipe for a survival horror if I ever saw one. The funny thing is that in the long run I spent less time being scared and more time being stealthy than I thought I would. While the game is certainly rooted in horror it is no doubt a stealth game as well. Any way you slice it, you will not get through without stealth. 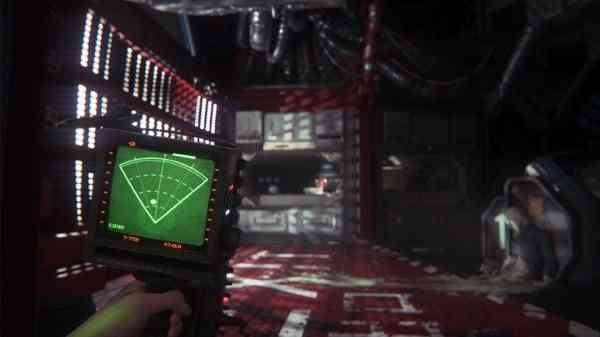 Now despite all this praise I’ve thrown upon Creative Assembly and Alien: Isolation the game isn’t without its quirks. Some very odd save glitches frustrated me to no end, although I did learn to work around them by rebooting the game. Cutscenes are good but avoid looking at mouths because the lack of synchronization pulls you right out of the game. I think my biggest complaint, and I’ll come right out and say it’s trivial, is the load times between levels AND after being killed. When you die so much in a game that load screen becomes more terrifying than the game itself. I saw it a lot. A lot of the game’s missions involve traversing over a section of the station only to have to trudge all the way back which also made for a repetitive feeling. In fact you’ll cross the same sections of the station numerous times over your play through and while that may help for familiarity in knowing where you’re going it also starts to feel, well, too familiar. I know that makes sense to me and hopefully that makes sense to you too.

Luckily, none of these minor annoyances do enough to ruin this game. It is a chilling, suspenseful and downright terrifying love letter to fans of the Alien franchise. Hell, you can still get enjoyment out of Alien: Isolation if you’ve never even seen one of the movies. Its ability to create that tense feeling of utter helplessness is second to none and something we haven’t seen done this well in a long time. They say that in space no one can hear you scream. In real life your neighbour can hear your squeals of terror so prepare to explain yourself.

*** Game reviewed on Xbox One with copy provided by publisher ***

Next Astro A38 Wireless Noise Cancelling Headset Review – Beats They Are Not, But Still A Solid Set of Cans
Previous Mad Catz S.T.R.I.K.E. M Keyboard Review – Too Small for Reasonable Hands