Hardware reviews way different than reviews for software. You need to look for different things. They aren’t as inherently “fun”. Instead of playing something new and cool, you have to play with something new and cool. It’s a lot more tinker-y. One of my favorite things to do is to see how many buttons I can press before something explodes! Also, hardware doesn’t sit as nice on a shelf. You can’t line up hundreds of keyboards in alphabetical order in a games room and have it look good. That’s ridiculous. The only thing I know to do with extra stuff is to put it in a box for later use. No! I have a better idea! I should get a thousand monkeys, get them to use all of my spare keyboards, and see if they really could write Hamlet! I see no flaws with this plan. 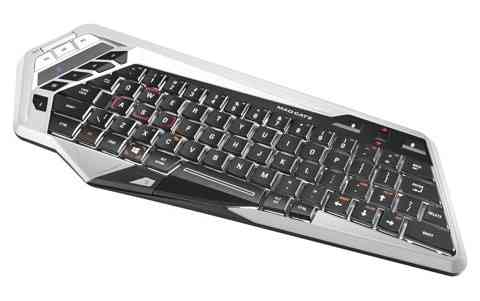 As far as keyboards are concerned, the STRIKE M is…well, a keyboard. It’s got all of the keys that a keyboard should! What sets the STRIKE M apart are all of the bells and whistles that come on top of the expected. This baby is a Bluetooth keyboard, which means it can connect to anything Bluetooth, be it a phone, tablet, PC, or even smart TV. This alone isn’t altogether surprising for a wireless device. What sets the STRIKE M apart is the ability to connect to four separate devices at once and swap between them seamlessly. While I can’t think of too many occasions anybody might actually need to utilize this feature to its fullest, it’s still a wonderful option. On its top left corner, the STRIKE M is equipped with audio control buttons and a scroll wheel to adjust volume. Beside that are both left and right mouse click buttons, and further bellow that is a button that toggles the backlight brightness for your keys. Like so many other keyboards, the STRIKE M can also be used mouse free. On the top right corner it has OFN (Optical Finger Navigation), and more left and right mouse click buttons. The last truly interesting new button to be found on this keyboard is stationed directly left of the space bar, but below the alt key. All dressed up with the Mad Catz logo, this button, when pressed, will send whichever device you’re currently on back to its home menu.

The STRIKE M is a slick keyboard; one might even choose to use the word “snazzy”. Its coloration is a striking black on white for high contrast, and it is angular in all the right places. This baby is centerfold material for keyboard glamour magazines. However, looks aside, I actually have a huge beef with this keyboard. It’s flat out hard to use. Making a keyboard that’s portable and practical while on the go is no doubt a tricky task, but this thing is way too small. I’m a pretty big guy, so I have pretty big hands which rendered this entire board nearly useless. Hitting just one key per stroke was an ordeal and took a great amount of focus, to the point that I had to stare at myself using it. This problem wasn’t something that I alone experienced. For the sake of a fair review, I had some of my smaller handed friends try the STRIKE M out. While they had greater success hitting only single keys, the other major problem was in hand spacing. Because they keys are so compact you have to hold your hands uncomfortably close to one another. Every single person that tried the STRIKE M developed a major case of “raptor hands”. It’s actually easier to type using the built in touch keys on most devices than it is to type with this keyboard; which is unfortunate because it’s so pretty. 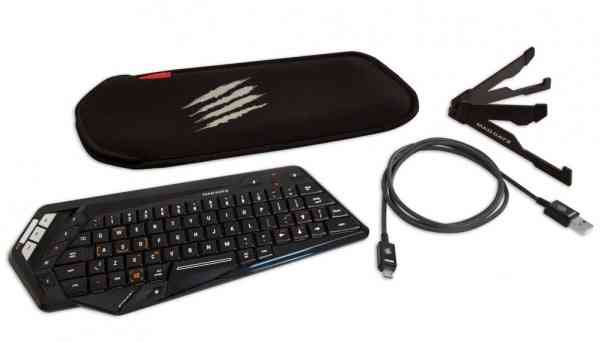 Aside from the keyboard itself, your STRIKE M box comes with a few other extra goodies. The keyboard comes in a sleek carrying case adorned with the Mad Catz logo. It’s a soft material, and is easy to use. The Keyboard simply slides out one side when you need to use it. You’ll also find a USB charging cable. The cable itself isn’t very long, so using it while it’s charging will require to either sit ridiculous close to a wall, or your computer, which more than likely already has a dedicated keyboard. Lastly is a smart device stand. While using your STRIKE M keyboard, you can prop whatever phone or tablet it is you’re working in in front of you at a better angle for visibility. Before I bothered to read the set-up guide for the STRIKE M, I actually assumed the stand was for the keyboard itself when it wasn’t in use! Silly me…although it totally fits. Also, you get stickers. Stickers are fun!

The STRIKE M keyboard is all over the place. It’s got wonderful and practical features, and it looks great too; but its ease of use is unfortunately lacking. It certainly has its place in the world, but for most people I’d probably recommend looking for something a little bigger. That being said, if you don’t mind learning to squeeze your hands together, you get a top of the line keyboard at a relatively cheap price point of only $100. I can also see the STRIKE M as a great “kid’s first keyboard” for the little ones just starting to learn how to type. At the end of the day, although I was a little disappointed by this keyboard, I wasn’t outright turned off of it. While I can say for certain that its use won’t be commonplace in my household, I’m also not getting rid of it. I’m looking forward to using it on future Bluetooth devices, like that Smart TV that seems to be in my current pipe dreams. There may also be cool new Bluetooth devices in the future that I can tap into using this. Who knows? Only time will tell.

Next Alien: Isolation Review – Getting Everything Right That Colonial Marines Got Wrong
Previous NBA 2K15 Review – King of the Court, The Reign of NBA Live is Long Over