Airscape: The Fall of Gravity Review – The Solid Music and Playful Artstyle will Keep you Entertained

Crazy variations on a classic genre are what make indie games great. The small dev-teams have limitless creative liberty to push conventional boundaries and run with it unlike big studios who are backed by even larger publishers. The Cross-Product team behind Airscape: The Fall of Gravity did just that utilizing the Construct 2 engine.

The game opens with a family of octopuses (octopuses is the correct term, trust me) swimming in a rather small-enclosed asteroid-like object. Suddenly, a mysterious mechanical menace captures you, and all your friends, in a bright flash of light. Next thing you know, you wake up in a strange land and begin your odyssey home. Along the way you free your brethren from their tanks and are able to play as them as you twist, tumble, and turn through the odd gravity of each level. The game is touted as an action-platformer, but I would add the qualifier of puzzle-platformer as well. The fast paced maneuvers and quick reflexes add a dynamic challenge to the trials of the game. 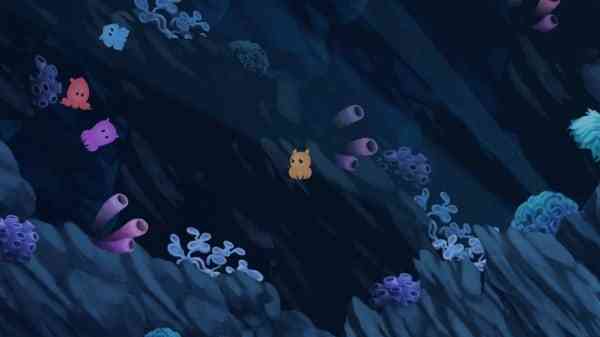 The core objective for each level is fairly simple: reach the end while obtaining as many collectibles (essentially keys to unlock later zones) along the way. Each level, however, offers a variety of challenges that keep you from reaching the goal much less your aquatic friends strewn across the level. The mechanical menace that has abducted you and your buddies has one heck of a security system including laser walls, proximity mines, sniping turrets, homing missiles and shredder-bots to name a few. All of this thrown in with the wild gravity of each level provides for some great challenges.

As an octopus, you lack any sort of offensive capabilities to combat these machines. Instead, each octopus you unlock has a certain skill that can overcome some obstacles easier than others, as well as hinder you in trying to complete others. For example, the first fellow octopus you unlock has a floating ability that allows it to jump higher and farther, but lacks the weight to easily guide a rocket platform and he tends to slide on surfaces. This is actually a really subtle point I think the developers were trying to achieve with the character selection system. I don’t believe any particular octopus is necessary to complete a level but some make it much easier. Conversely, I feel like some of the octopuses lack the characteristics necessary to finish others. Several times I would choose a certain octopus to start a level with and make it halfway through before I realized I lacked the speed or weight necessary to complete the rest of the level. This was only slightly frustrating in the earlier levels, but became annoying in the more lengthy and complex levels.

“I could tell that the music wasn’t just a second thought added in at the end of development; there was some deliberate planning and meticulous composing to be able to have a score like this. ”

There weren’t many times when I thought the challenges were unfair, but the times I did, I sensed the unfairness stemmed from the inability to see much of the level at once. If I may for a second get a little pretentious and reference a Jonathan Blow masterpiece: Braid. A major design philosophy behind that game was to give the player everything they needed on screen at the same time to complete a challenge. It was a test of the player’s ability to figure out the absolute necessary path to succeed because there was only one correct way to do it and having all the moving parts on screen at once was the fairest way to achieve that.

In Airscape, you often only see a small portion of the map at a time. For levels that require you to make a very specific and precise set of movements, this is very frustrating. I understand and acknowledge that some maps require one to quickly adapt to erratic enemies or moving terrain and those are handled beautifully. In fact, the greatest sense of accomplishment I felt was after dodging a mechanical jellyfish in between two lasers that were moving through the water. It was a tense moment as one wrong move and I would need to start the whole sequence over again, but I came out the other side feeling a little proud (it’s the little things, right?). Yet, all I felt was frustration after jumping to my death dozens of times in quick succession trying to figure out where I was even trying to go in other levels. Some might enjoy that type of sadistic trial and error play style, but it just makes want to step away from the keyboard for a bit….

… but I couldn’t because I just wanted to listen to the majestic orchestral soundtrack this game offers. Each zone has its own set of tracks to fit the theme such as  the upbeat and cheery melodies in the spring-like zones, the slow dirges in the cavernous zones, and the long drawn out hollow sounds of space in the low-gravity zones. I could tell that the music wasn’t just a second thought added in at the end of development; there was some deliberate planning and meticulous composing to be able to have a score like this.  The music perfectly accompanies the artistic quality of the game too. The animation and sprites are very well done, with each zone having a distinct landscape and ambience. I am a big fan of the foreground effects that help add some depth to a 2D platformer.

I’m actually very picky about what platformers I play since it is one of the most abundant genres out there. I want something to be challenging and rewarding enough to entice me to play through the levels. Although I might disagree with some of design choices in a handful of levels (which I do weigh heavily) in Airscape: The Fall of Gravity, the core mechanics are responsive and clean enough to make it a must for picky fans of the genre. The superb music and playful art style keep the game enticing through the frustrations you will no doubt face.