Ace Combat was the first arcade like dogfight/flight simulator series that I ever really got into.  Of course this was during the days of the PSone.  Since then consoles have become far more powerful and my game preferences have changed over the past 13 years or so.  Given that there have been 18 games since the series inception, it is only natural that there have been other things to “catch my attention”.  That being said, when given the opportunity to review Ace Combat: Assault Horizon Legacy+ I was intrigued to say the least as taking the series on the go seemed somewhat enticing, and being able to check out the game on The New 3DS sounded kinda cool.

Let’s get something out of the way right now; Assault Horizon Legacy+ is a re-release of the original game from 2011 that was released on the regular 3DS.  The ‘+’ in the title reflects a few new additions that have been made particularly for The New 3DS.  So for those that played the 2011 game, don’t expect anything new in terms of content.  The new features that have been added are Amiibo support that allows you to open character themed planes, the ability to use the new C-Stick to control the game’s camera, and of course the 3D is much better given the use of The New 3DS’s “Super Stable 3D”.   These are the only additions to the game and in the end they don’t add up to that much (see what I did there…”add up”).

For those that have not played the original 2011 release, you take on the role of Phoenix, a generic pilot fighting with the “allies” in an effort to defeat the “rebels”.  Yep, it doesn’t get any better than that (note sarcasm).  The story is not that deep nor will you find yourself invested in it.  Regardless, it does set up the fact that there is a reason you are flying in various planes blowing enemy bogies out of the sky.

Gameplay is fairly straightforward; you are given mission briefings before you take off to fly the “unfriendly” skies.  As you make your way through the game’s various missions you’ll find there is a bit of variety, from destroying enemy aircraft to destroying enemy locations or supplies; however, the variety is not particularly diverse and you won’t find yourself raving about the missions you have to complete. 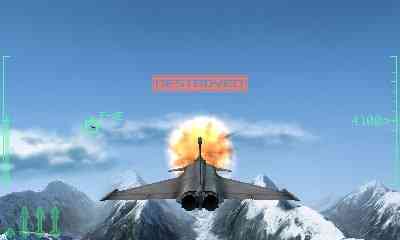 What will catch your attention though is the mechanics of controlling your plane.  Gone is the monotony of minute moves with lots of button presses.  You’ll find controlling your aircraft is fine tuned for playing on the 3DS’s screens.  Complex manoeuvres are handled though a simple series of button presses (e.g. barrel roll -> slight flick of the Circle Pad and tap ‘Y’) that just make sense.  You will be taking to the sky in style in no time and have a bit of fun doing it.

For those looking for a deep and engrossing experience, Assault Horizon Legacy+ is not that long of a game at all.  You’ll find yourself clocking in at about 4-5 hours of gameplay, including checking out out and collecting all the in-game planes and finishing the missions with the best ratings possible.  For me personally, I found this game was best played in small blocks, as it felt somewhat longer.  It really does feel like it is something that you can play when you are taking a short break from your weekly Destiny Nightfall or daily bounties, when you need a break from any other console game you might be playing, or when you are on a road trip (e.g. bus, train, or even plane).

If there is one GIANT missed opportunity it is that there is no inclusion of any multiplayer support.  If there is one thing this game really does scream for it is playing with, at the very least, one friend or public ally.  Having some missions geared for more than one player would have been quite fun, but alas they seemed to have missed the boat here.  I hope that if they release another 3DS Ace Combat game this is something that they include next time. 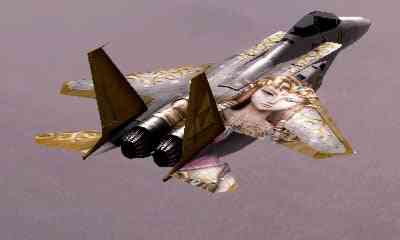 Visually, Assault Legacy Horizon+ isn’t a bad looking game.  Planes are fairly well rendered and when flying around, especially with the Super Stable 3D on, everything looks pretty darn good, especially the sense of depth provided when in 3D.  Draw distance isn’t too bad as you can see fairly far into the distance.  The various lands below look fairly decent from afar, but when you get up close they look like a bit of a pixelated mess.  You have to remember though that this game was originally released about 4 years ago, and I don’t think they did much to improve this area.  The Amiibo themed planes are pretty cool and diehard Nintendo fans will enjoy seeing some of the big N’s franchise characters skinned onto warplanes.

The audio is just as impressive as the visuals.  You’ll find some voice acting, including some solid lines during the various dogfights you’ll engage in.  Missiles and gunfire from your plane don’t sound bad at all and the resulting explosions from your in-air combat manage to make an impact.  The New 3DS has louder speakers than it’s predecessor too, but once you put on a set of headphones things get even better as you feel a bit more immersed into the game’s sound.  Overall the sound, and video, is fairly good, but there is no doubt that the limitations of a 4-year-old game do stand out at this juncture.

Ace Combat: Assault Horizon Legacy+ is a great way for fans of the franchise to get some aerial combat in while on the go.  That being said, for those that experienced the game in 2011 on the regular 3DS, there is really no reason to “double dip” and buy the game again, as the new features don’t add a whole lot.  In the end this game does manage to show off what some of the benefits of The New 3DS are, but the short gameplay length and shortcomings of the 2011 original that are still evident (e.g. pixely visuals when close to the ground environments) just can’t push this game into the realm of must have for The New 3DS.

***This game was, of course, reviewed on The New 3DS, with a code provided by the publisher***

Next ZEN Pinball 2 Iron & Steel Pack Review – It’s Got Vikings, A Giant Fire Breathing Dragon, and a Donkey!
Previous Republique Remastered Review – The Game Watch Dogs Could Have Been