A.W.: Phoenix Festa is the latest Japanese niche title to be localized in the American and European markets. A.W.: Phoenix Festa is unique in that it brings a blend of combat and visual novel/dating-sim gameplay in a somewhat typical anime setting. The game is based is on The Asterisk War: The Academy City on the Water, a Japanese light novel series turned manga and anime. The game plays and looks exactly like one would expect it to be. Simple combat, a harem-styled storyline, and classic Japanese tropes all make an appearance in this game. Visual novel storyline, arena styled combat, what could go wrong?

Let us start at the beginning of the story. You play as a new student at Seidoukan Academy, either as the main character of the series, or as a character you create. From there, you are quickly thrust into the Phoenix Festa, a multi-school battle tournament. The story appears quite generic on the surface level, but some intriguing characters and storylines really shine through. Unfortunately, there were a lot of plot holes and confusing scenes which seem to have come out of nowhere. Perhaps a fan of the other media associated with this game would better understand the story.

“Unfortunately, there were a lot of plot holes and confusing scenes which seem to have come out of nowhere.”

The game is primarily a single player story experience, with a battle mode to fight AI controlled enemies, other players via ad hoc mode, and survival missions as well. The story mode is relatively short, totalling approximately 3-4 hours per playthrough. Despite a short story, the game offers various storylines depending on which route you take, increasing the replay value and overall playtime of the game. Newcomers to the visual novel genre may enjoy the game as it is much simpler than other popular games within the genre, and also has a light, fun combat system.

The controls when battling are pretty simple and easy to pick up. Despite there not being much of a tutorial for the combat, players will find that the buttons pressed will correspond with their intended actions. For example, the X button would perform a jump as expected, and so forth. In the visual novel portion of the game, the controls are featured on the bottom of the screen for easy reference. 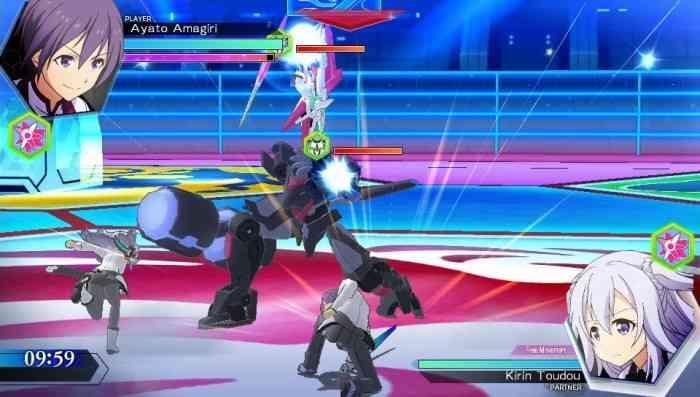 One issue with the combat portion of the game is that the AI is programmed to be too easy. Even in the later portions of the games, one would find the battles to be completed very easily. On top of that, there is no option to increase the games difficulty. Though the combat portions of the game are too easy, the combat system itself is enjoyable, if a bit simple. Given that combat plays a major role in the game, this is somewhat disappointing, though those playing the game mainly for the story element might find this aspect to be a positive.

The graphics in the game are very well done. The various scenes, characters, backgrounds, and art panels are as one would expect of a Japanese manga/anime styled game. Not only are the drawings crisp and vibrant, but the in-game graphics during battle are well produced as well. The game plays at a fluid rate while looking great. The only issue I had with the graphics were that many of the assets were clearly reused with a different colour in an effort to have a more diverse set of side characters.

“Though the combat portions of the game are too easy, the combat system itself is enjoyable, if a bit simple.”

Like the graphics, the audio in the game was more than adequate. A.W.: Phoenix Festa features some very solid Japanese voice acting in conjunction with correct sound effects and appropriate battle and scenario music. Although the music is not spectacular, they suit the game and the moments they are utilized very well. Though this reviewer enjoys audio in the source language, English voiceovers were noticeably absent. Furthermore, the Japanese audio during combat would have been more effective if presented alongside subtitles. 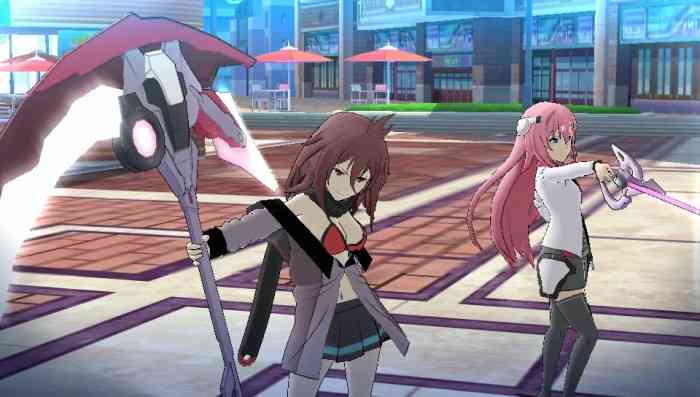 Overall, A.W.: Phoenix Festa presents what it has well, though there is a lot left to be desired. Rather than tying into the source materials, the game may have been better off if it had its own definitive ending and did not rely on the player to know relevant background information. Despite having a shallow combat system, the gameplay remains fluid and enjoyable, despite being too easy most of the time. The game is most enjoyable for fans of the series, but an overall shallow experience sinks the title in an already small Vita pond.

**A PS Vita code was provided by the publisher** 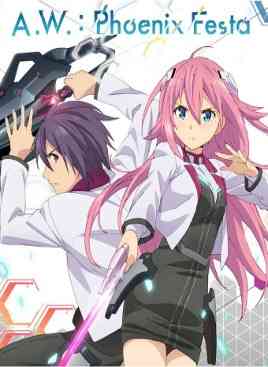