If you gravitate toward brain-teaser or puzzle games, then 0RBITALIS will serve you well.  Mastertronic delivers a compelling instant classic that combines physics, strategy and luck with animated cosmic debris.  I have to admit, being more of an action and RPG gamer, I was expecting to be a little underwhelmed and likely bored of playing this in a matter of minutes.   Instead, I was quite taken by it.  Within that matter of minutes I was intrigued, challenged and ultimately kind of addicted.

Major Tom to ground control… hello?  Hello!?  No instructions, hints or play guides are provided in-game other than a basic key controls page.  At the time of this review, the online help feature was not yet available, so I was left to my own devices in discovering the strategies and mission objectives.  The game has been in early access for about a year and the official release date for the full featured version has been set to May 28th, 2015.

For all missions in the first sector, the goal is to launch your probe on a projected trajectory so that it remains in flight for as long as possible without colliding with any planets, moons or asteroids or flying out of bounds.  By moving the mouse, the trajectory indicator changes its arc and projected path.  When you are confident with the projected path, hit the left mouse button to launch the probe and a timer will begin.  A varying gravitational pull of the planets and other orbiting objects will affect and change the flight path of your probe.  When the probe stays in flight for any amount of time after the timer runs its course, you advance to the next level.

Higher scores can be reached if you let your probe remain in flight until it crashes, rather than hitting the “continue” button right away.  This presents the first significant flaw in the game: In the missions that require your probe to stay in flight for as long as possible, achieving a top spot on the leaderboard can potentially become a long and tedious game of patience.  The probe makes some visually impressive patterns and all, but do I really want to endure sitting there for an hour or more waiting and watching all that trippy orbiting in order to cinch the high score?  Not so much! I don’t think this would happen very often but there were a few levels where I noticed the top places on the leaderboard having orbit times in excess of an hour.  This game certainly won’t hog your system resources, so I suppose you could be doing other things while waiting.

“Mastertronic delivers a compelling instant classic that combines physics, strategy and luck with animated cosmic debris. Within minutes I was intrigued, challenged and ultimately kind of addicted.”

You also should be aware that as you level-up to other sectors in the star map, the object of the mission can change without warning.  Sometimes there is no timer and the object is to crash into a target directly, and other missions call for having a collision a millisecond after the timer runs out.  The discovery of this was rather upsetting after having watched my probe orbit on the screen for a good twelve minutes, thinking I was about to take a high rank on the leaderboard when, in fact, I scored among the lowest.  Hey!  How about a little more info here, bro?  I mean, I’m all for using my intuition and skill to dial in the strategy of your game, but it’s kind of a low blow to change the rules without so much as an audible snicker or a glimpse of a hint bubble.

As I progressed through the missions, new elements and patterns were introduced.  I found myself passing some missions within the first few attempts, others took many dozens.  In the higher levels, multiple planets, moons and asteroids are presented to obscure and influence your trajectory.  Then, more probes are added so that you have to track and control multiple flight paths at once.  It gets nutty, but I can’t deny that I was having a blast with it. 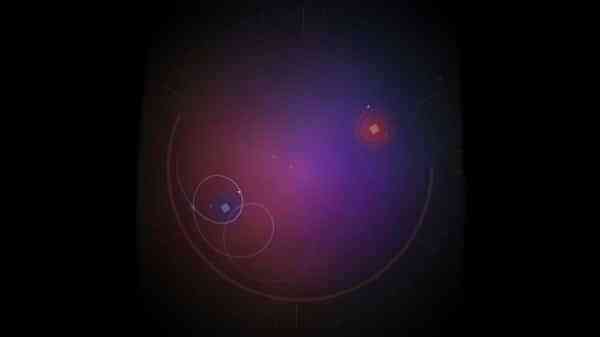 To improve my accuracy, I had to open my mouse settings and slow my X,Y velocity right down.  It took some getting used to, but once I got the hang of it I found myself unable to stop playing. Although some missions seemed nearly impossible at first, I didn’t feel the game to be particularly frustrating because the mission resets instantly after a failed attempt and you are ready to try again.  There are no cumbersome “game over” screens, load times or unnecessary movie sequences to wait for.

The graphic art may not be what you’d hope for in a space oriented game, but still very cool considering the simplicity.  The fluidity of game play and sheer engagement makes it easier to overlook any shortcomings in the graphics department and DoseOne did a great job of creating a fitting soundtrack with sound effects that really compliment the look and feel of the game.  I was able to make it through all 50 missions in 3 sessions of a little over an hour each.

“The graphic art may not be what you’d hope for in a space oriented game, but the fluidity of game play and sheer engagement makes it easier to overlook any shortcomings.”

When I completed the final mission, all I wanted to do was start over again to beat my previous scores.  Once a level is complete, it is unlocked and you can return to play it again at any time.  You can navigate through all the missions from the star map screen. The star map is a handy feature if you’re wanting to go back and improve on your scores.  If you hover the mouse pointer over a mission it displays a small version of the mission screen.  Click once, the corresponding leaderboard will appear for quick reference.  Click again to replay it.

If the 50 missions aren’t enough for you, you’ll be pleased to know that the game comes complete with a level editor so you can create your own missions and share them with everyone in the Steam Workshop.  The editor is also simple in its design, however, in my experience the user interface was difficult to understand and use.  I like that the creator wanted to maintain the same minimalistic approach but sometimes, less is actually not more.  It’s less.  Perhaps the editor will have more functionality and at least some basic documentation for the official release date.  I think the editor feature is a great idea and once I know how it works, I will probably spend many hours creating and contributing missions for the Steam community.

0RBITALIS is a highly playable and addictive game that I predict will do very well.  It would likely celebrate more success on phone or tablet platforms for its simplicity and the fact that you can pick it up and continue where you left off easily.  I wasn’t expecting to like the game as much as I do yet 0RBITALIS is a title that will remain in my installed Steam collection.