Ever since the debacle with SimCity in 2103, people have turned to other sources to fuel their need for a good city builder and simulation game. Similarly, several dev teams have put out great alternatives that allow us to be the overlords of digital lives. The team at Funatics Software have given us a new entry into this genre, a game called Valhalla Hills.

Just recently released for early access, Valhalla Hills is about the Vikings that almost made it into the great realm of Odin. You must use your divine hand to guide these wayward Vikings into gaining enough honour to reach the hallowed halls. Build up villages to house your Vikings, farms to feed them, and armories to give them the tools they need to defend themselves against the otherworldly enemies as well as the hostile wildlife.

Something most games of the city/village simulation genre feature is a single map that you build up into a metropolis after investing many hours to do so. In its current state, Valhalla Hills features a series of randomly generated maps of varying sizes that you progress through. There are always two ways to complete a map to move on: either fight the guardians of the portal or appease the guardians through sacrifices (basically paying your way to the next map with excess resources). The only persistent thing from one map to the other is the Vikings and the honour they’ve accumulated. 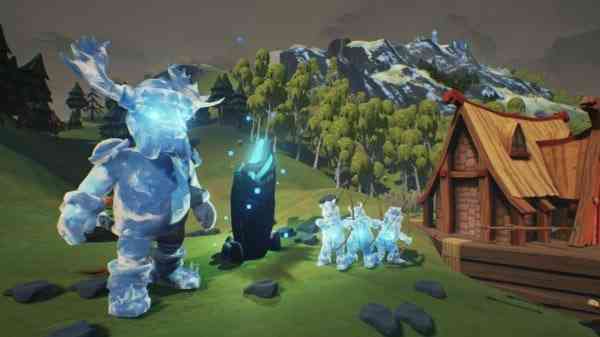 For the first couple of maps you progress through, you will unlock new buildings and new potential features on a map (terrain, enemies, wildlife). Unfortunately, this abruptly comes to a halt as the unlockables seemed to run out quite early into the game. In those early stages you feel like you are working toward expanding the possibilities of your Viking clan, earning honour passively through building up maps and growing at a steady rate. Once all of the buildings become accessible however, the game feels like a grind to earn enough honour to…reach Valhalla? It’s not really clear what you are working towards by gaining honour, just that it’s something you need to do.

“The developers have done some amazing ground work with the mechanics and the Viking A.I. as well as some well-done artistic work; they just need to give players some more options for building Viking villages.”

I can look past some of this for now because of the Early Access title, but I would like to see some more depth to the game. Right now it feels like they’ve barely scratched the surface with all the potential they’ve shown. More buildings would be a great start, as well as maybe some larger maps. The developers have done some amazing ground work with the mechanics and the Viking A.I. as well as some well-done artistic work; they just need to give players some more options for building Viking villages.

It looks like a promising game, and it uses the Unreal 4 Engine so it’s a visually stunning game as well. Keep in mind it is an early access game so it is prone to bugs and awkward mechanics, but the idea is sound and the developers are very open about what they are working on and their vision for the game. The game is currently discounted on Steam for Early Access, so I would recommend keeping an eye out for improvements and updates to the game if this seems interesting to you.

Next StarCraft II Legacy of the Void Prologue Impressions – Nothing Innovative, But That’s Okay
Previous Halo 5: Guardians Campaign Preview – The Biggest Single Player To Date For The Franchise