Halo 5: Guardians Campaign Preview – The Biggest Single Player To Date For The Franchise

Last week I got a chance to sit in on the Halo 5: Guardian’s campaign mode while at Microsoft Canada’s X’15 event. Tim Longo, Creative Director on Halo 5, was kind enough to talk about the franchise as a whole, and show off one of the new campaign levels. Halo 5 has been a three-year project for the team at 343 Industries and along with the multiplayer component, they have been focusing on making an epic campaign mode. Given that this the next chapter in the Halo saga is on the Xbox One, the game has been developed with the new hardware in mind. 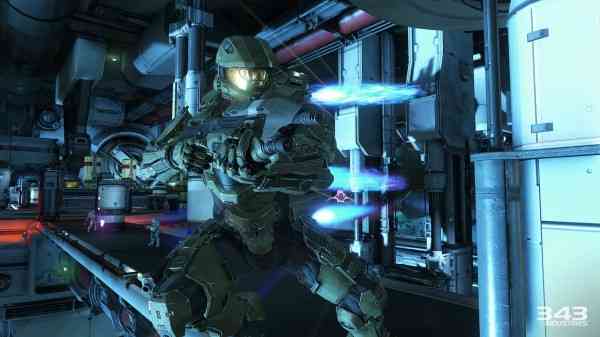 Halo 5’s campaign is the biggest campaign that has been developed to date. It is a little less than twice the size of Halo 4’s campaign, so in Tim’s words, “it’s really, really big”. Fans will be travelling to three different planets this time around: a human-oriented planet, a Covenant planet, and a Forerunner planet. There are also quite a variety of cast members too, and Tim pointed out that there are familiar faces as well as some new ones too. You’ll see Halsey, Palmer and even the Arbiter. But with the familiar comes those that are brand new.

The most important difference in the campaign mode this time around is that there are two complete squads of four characters that you play as throughout the campaign. You can switch back and forth between the two of them. The first squad is Master Chief and the Blue Team. Blue Team, for those who don’t know, is comprised of different brothers and sisters of Master Chief. They were all created as Spartan II’s as kids and raised together. They’re the last remaining Spartan II’s, and they’re reunited for the first time in a game. They’ve been in the extended lore, and I learned that it’s really exciting for 343 Industries to bring them together for the first time in a game, especially as the dev-team are big Halo fans themselves, not just makers of the game. Along with Master Chief are Linda, Fred, and Kelly. During at one point in Halo 5’s story, and shortly after a mission, you’re going to see that Blue Team actually goes AWOL, goes rogue and leaves the UNSC, which prompts the creation of another team, Fireteam Osiris (Red Team), who gets the assignment to go after Blue Team and hunt them down.

“Halo 5 has been a three-year project for the team at 343 Industries and along with the multiplayer component; they have been focusing on making an epic campaign mode. “

Red team is led by Spartan Locke, who is an ex-ONI agent who worked for the Office of Naval Intelligence as an acquisition specialist, so he’s a man-hunter. He goes after hard targets for the UNSC. Some new characters, as well as a familiar one, join him on this mission. There is Vale, who is a linguistics expert and an expert in Sangheili culture, which is the Elite home world for the Elite race. Then we have Tanaka, who has a personal history with the Covenant, because her home planet was glassed by the Covenant. Then, of course, there is Buck, who is a returning Spartan. He’s played by Nathan Fillion. Halo fans should remember that he was in Halo: ODST.

The single player campaign is really a co-op-centered campaign, so 343 Industries has built the levels and designed the encounters in such a way that they are much more expansive to accommodate four players at all times. If you are playing by yourself, you control the whole team, which is pretty cool in our eyes. If you’re playing a co-op game with other people, you run on dedicated servers and you have a seamless drop-in/drop-out co-op experience. So, if you’re playing a solo co-op game, your buddies can come in, join at any time and take over one of the AI’s. Then if they leave, they can just leave the game, and then you can keep playing while the AI will take over the other character(s) for you.

The campaign section we checked out was simply titled “Blue Team”. In this mission, you play as Master Chief and Blue Team who have been sent on a covert mission to go after a ship, called the Argent Moon, which is an ONI research and development vessel that’s been lost in deep space, and they find it two years later. When you come upon it you discover that it’s been overrun by Covenant pirates, so they’re coming after the ship for an unknown reason. Shortly after this mission, Blue Team goes AWOL for a mysterious reason. That is all we were allowed to know about the mission as to not give us, or you, any spoilers. 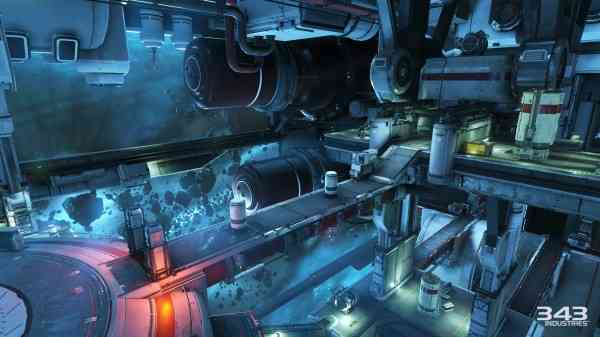 One of the biggest things that was noticeable was how big the level was. We were told that it was about half the size of some other levels in the game; so needless the game is going to have some huge levels. The verticality was another thing that was very evident. You can get high up and this affects how you play. From getting a great view of your surroundings as you plan your path of attack to pulling off some incredible “ground-pounds” to kill enemies with. The game runs smooth even with a lot of action going on. The in-game engine is a highly modified version of the same engine that was used in Halo 4, and it looks good. The improved visuals are reflected in how good the enemies look. I actually kind of marveled at the Covenant grunts on screen as I don’t remember them being so detailed.

Being able to order your AI teammates around was simple too, as with a simple press on the controller you can get your AI team members to focus on a specific enemy, pick up a specific weapon, or defend a specific area. Given the size of the level, it was great to see how your AI can assist you in your fight. To tell you the truth, I can’t wait to try playing with three other real people as it will really bring about a feeling of scope to the gameplay.

The campaign level was an edited, and shortened, version of what the actual in-game level will be. But to our amazement, we did get to see a bit of a teaser as the level ended with Master Chief having a vision. During this cutscene you are introduced to someone you’ll recognize in a heartbeat, as “she” talks to Chief from the distance while being shrouded in the shadows. Hearing her voice gave me some hope that this character will indeed play a role in this latest chapter of the Halo saga as I can’t envision a game without her. We can’t wait until this October when Halo 5: Guardians hits store shelves, and the next chapter of the saga finally plays out.