Rise of the Tomb Raider has been on my radar since it was announced a little over a year ago. It’s firmly cemented on my wish list for this upcoming holiday season (I imagine I’m not the only one) due to how amazing the rebooted Tomb Raider (2013) was. Truth be told, I am a huge fan of Tomb Raider. This is one of the few titles I have purchased on both the Xbox 360 and the Xbox one, and played through it on both. Xbox Live Gold subscribers will soon be enjoying this title too as Tomb Raider has been announced to be free in September 2015 just ahead of the release of Rise of the Tomb Raider.

So let’s just say I was pumped to check this title out at X15 last week in Toronto, Ontario. Immediately once behind the curtain into the demo area, I was blown away with what the Crystal Dynamics team has done with the graphics. I’m talking about amazing landscapes, stunning waterfalls crashing over rocks, creepy tombs and tunnels filled with all sorts of creepy crawlies. It was some real beautiful stuff and that’s just what was sitting in the background. Imagine what the foreground looks like and how impeccable Lara’s interactions are with her environment. The developers have outdone themselves fine tuning the visual experience in Rise of the Tomb Raider as thus far it looks amazing.

“The puzzles throughout the game will keep you thinking and reminded me of Prince of Persia: Sands of Time where you had to move things into place, pull levers and reach certain points in the level to complete the challenges.”

As we watched Lara progress through the game, Philippe Therien – Senior Designer narrated many facets of the game. Where 2013’s Tomb Raider revolved more around Lara surviving and starting her journey to become the strong woman with nerves of steel, Rise of the Tomb Raider expands on how she has become the Tomb Raider. With that in mind there is much more of a focus on raiding tombs than ever before. Lara will be required to find clues, solve puzzles and decipher hidden meanings to progress further through her challenges and ultimately find the prizes within the tombs while avoiding the traps to stay alive. The puzzles throughout the game will keep you thinking and reminded me of Prince of Persia: Sands of Time where you had to move things into place, pull levers and reach certain points in the level to complete the challenges. 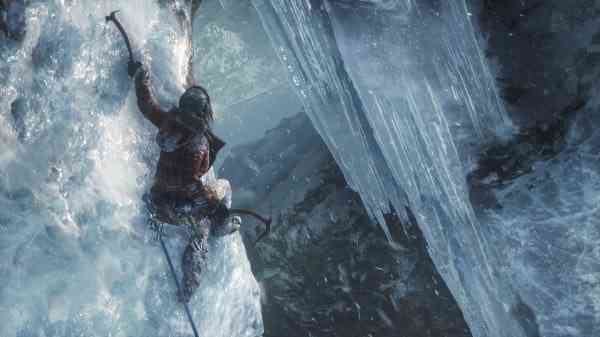 Rise of the Tomb Raider is three times larger than Tomb Raider and offers a lot more hunting, collecting and exploring. It appears at this point the development team has taken everything that is great about Tomb Raider and simply expanded upon it. With a huge leap in graphics and continuing on the story of Lara, I am left with the opinion that if you don’t have an Xbox One to play this on you may just want to run out and get one to avoid having to wait next year when it comes to PS4.

Rise of the Tomb Raider is scheduled to be released for Xbox 360 and Xbox One in November 2015, Microsoft Windows in early 2016, and for PlayStation 4 in late 2016.