V Rising is a vampire survival game from Stunlock Studios, the developers behind the Battlerite games. If you have played their previous titles, you may be familiar with some of the elements in V Rising. Vampire games can be a bit of a hit-or-miss situation. So far, V Rising seems to be trending towards the hit category.

Thoughts of vampires can sometimes turn towards rulers with castles or otherwise powerful individuals V Rising starts you off as a recently reawakened vampire. Having been in a slumber, you will have to regain your strength, rebuild your castle, and regain your position in a world where you are not currently at the top of the food chain. While V Rising doesn’t have a narrative-focused story per se, the initial plot and starting backstory does well enough to move the gameplay forward.

While I hesitate to call V Rising an MMO, its servers can support a decent amount of players to fill the world. Aside from the player count, V Rising features a variety of servers, ranging from PvE (Player vs Environment) to a few different types of PvP (Player vs Player). For the purposes of the Early Access review, I stuck with the PvE servers to get the best feel for the base of the game. 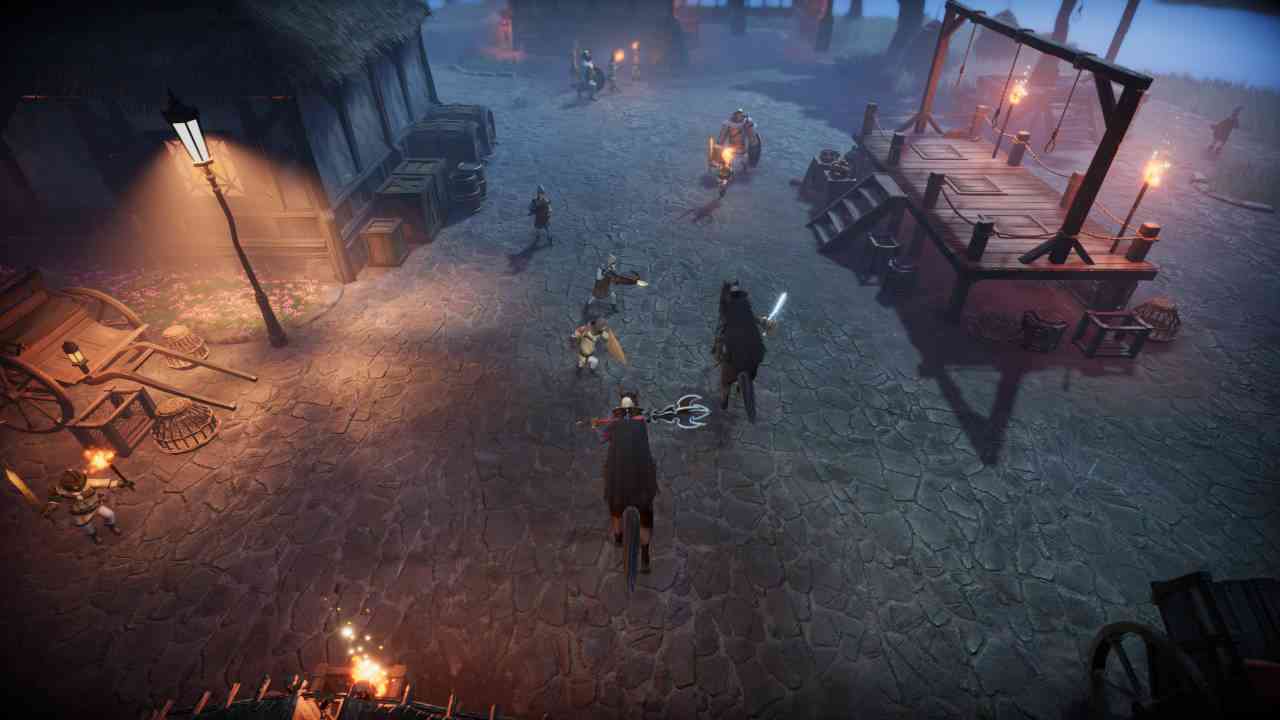 There are a few key elements in V Rising’s gameplay loop: combat, exploration, survival, and crafting. The combat could be compared to that of a MOBA game, though with movement coming from inputs rather than a mouse click. As a vampire, if you expected to be fighting humans, you would be correct. You will also be fighting wolves, skeletons, other vampires, and other creatures of the night. Once you get the hang of the combat, it almost feels second nature and generally rewarding as well. While gear matters, I would wager that skill plays the bigger role, especially as players get deeper in the game. Gone are the days of auto-attacking as we move into a skill-shot V Rising era.

The rest of the gameplay loops are exploration, survival, and crafting. V Rising does a good job of balancing them. If you stay on the roads, you might eventually come across a group of enemies patrolling the area. Going through the woods might lead to a face-to-face encounter with a pack of wolves. Remember, vampires don’t like the sun. V Rising’s day and night cycle means taking massive damage while exposed to the sun for just a bit too long. Luckily, staying in the shade during the day does help, and is also a pretty neat feature and consideration.

To be upfront, I’m not the biggest fan of crafting and/or building in games, but V Rising does an adequate job of keeping it simple and intuitive. Farming materials is a breeze and the crafting process is not too complex (at least up to the progress point I made). Base building is what you make of it. While managing your resources doesn’t play too big of a role early on, it eventually does get a bit intense. Functionality was important for my base. I expect that with more resources and time, a structure more befitting of a vampire could be achieved. Likewise in a PVP server, bases will play a much more important role.

Although I did not experience these portions myself, playing with a friend and against other players should add some extra enjoyment. Whether looking to tackle a boss with a group of friends or attacking the base of other vampires, the multiplayer portion of V Rising should also increase its longevity.

Myy experience with V Rising has been enjoyable overall. However, it should be noted that the game is still in Early Access. Changes will happen. Improvements will be made. I did encounter some slight issues, particularly with some dropped frames. As the game continues to be polished, I expect that improved optimization will occur as well. At this point in time, V Rising may still be a work in progress, but one that has the potential to be a hit for both its ability to be enjoyed as a streamed game and ability to be enjoyed by the player.

*** An Early Access code was provided by the publisher ***

The Elder Scrolls Online: High Isle Review – Set Sail for Intrigue
Next The Quarry Is a Scary and Creepy Good Time
Previous The Lord of the Rings: Gollum is Emotionally Compelling