The Talos Principle is an interesting first person puzzle game coming out in December. The goal is simple: collect the sigils for Elohim amongst the temples. Of course, the sigils aren’t just handed out to you as you traverse the mythical labyrinths. They tend to be behind gates, or past deadly traps, and you are armed only with your wits and whatever tools have been placed in each puzzle maze. After I got over the initial awe at how pretty the environment looked, I set off to see just how far I could get before being stumped.

I have to hand it to the developers; they’ve done a marvelous job with the puzzle design. My first steps toward enlightenment and sigil grabbing were full of a sense of accomplishment as I proceeded to conquer the mechanics set before me. Every time I would start to master a piece of the puzzle, another challenge would be presented. Someone has done a careful job of ensuring steady growth and it absolutely shows. I don’t want to spoil everything as the Talos Principle has a remarkable sense of discovery to it, but you start with one useable item and slowly unlock more as you outwit each puzzle. I’ll cover the first three that you unlock in the starting area.

First up is the jammer. I used this handy device to open gates, shut down turrets, and stop guards in their tracks. It requires only an unobstructed line of sight to use, and don’t forget that you can jam one object with two jammers at the same time. This is the first item you get to use and will be a staple for the rest of the game.

Second, we have the connectors. These allow players to complete the classic “line up the lasers” puzzles, using them to connect a beam generator to a receiver. There are two colours of beams, blue and red. If the streams are crossed, they cancel each other out. The beam can also be blocked by any solid object, which will come in handy in later levels.

Finally, players can unlock the cube. While certainly not a loving companion, these are very useful when you need that couple extra feet of elevation or you have to stop a guard from blowing you up. Sometimes all you need is a nice solid object to stand on, and that’s where the cube comes in. 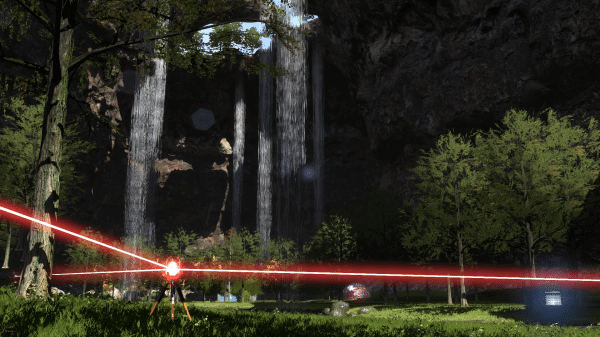 As I said before, there’s more where that came from but I’ll let you discover them for yourself. Everything about this world really does sell a sense of wonder and mystery, and I don’t want to detract too much from that. All you really need to know is that your hands are made of metal, and Elohim needs those sigils. More information is given to you as you progress through computer terminals with a ton of content to read. These usually give more questions than they do answers. I actually really liked the system they used here, and it blends technology into the seemingly mythological world. Aside from the terminals, you can also find voice messages hidden throughout the mazes. All of the exposition given through this helps break up the pacing nicely as well. Do a few puzzles, go check a terminal, do a few more and then head back to the hub. I never felt bored or forced to read, as the messages were short and to the point.

But what does it all mean? Well, I still don’t know. I’ve made it rather far in my journey to meet Elohim, but I’m stuck. Before, I would just move on to the next sigil and come back after. This really helped clear my head when I couldn’t figure out other areas, but not this time. I need this sigil, and the solution to my problem continues to elude me. I can’t give up though. I’ve come much too far to turn back or end up as a mere message on the wall. I need answers, and I need them bad. My sanity and sense of existence is at stake here but I can be patient. Where those who came before me failed, I will succeed.

Aside from the frustratingly clever puzzles, The Talos Principle offers a great escape for those with a higher end PC. The graphical settings are numerous, and you can really crank up the visuals if you want to just get lost in a beautiful universe. Once you venture past the first temple, the other hubs seem to all have a distinct theme as well. Everything appears to be based off of different mythologies, with the starting area set in Greece. I felt like Theseus, journeying through the labyrinth of Crete. My saturation was turned up a bit more than average as well, and the whole experience was rather surreal. I don’t want to give away too much about the other settings I’ve encountered so far, but if you know your world mythology you can probably hazard a few guesses.

All in all, this really is a fun and puzzling game. It feels kind of like a mix between the puzzles of Portal and the pacing/world of Myst, so if you enjoyed either of those I highly recommend The Talos Principle. I still don’t know what’s at the top of the tower, but I certainly can’t wait to find out. You’ll have to wait until December unfortunately, but in the meantime if you want to get your feet wet you can check out the public test. Give it a shot, if you’re a puzzle fan you will absolutely not regret it. Besides, the public test is free, what do you have to lose?

Next Dungeon Defenders 2 Preview – More Loot and Levelling, Best Played With Friends
Previous Assassin’s Creed: Unity Preview – Get Your Back Stab On in the Gritty Streets of 1789 Paris