Assassin’s Creed: Unity Preview – Get Your Back Stab On in the Gritty Streets of 1789 Paris

It’s less than one week until AC Unity hits consoles and we couldn’t be more excited. We got a good look at the game back at E3 this year and have been keeping tabs on all the news about the game as it’s released so in anticipation of our upcoming review we wanted to do a quick preview of what we’ve seen so far. Few franchises can manage to flood the gaming market with annual or even biannual releases and still keep afloat without too much criticism. Sure CoD releases every year and there’s no shortage of Dude-Bro gamers who will line up for it but it also has legions of haters too. For the most part it seems as if the Assassin’s Creed franchise has managed to do just that now moving on to its eighth (!!!) title. Last year’s ‘Black Flag’, the seventh installment, was in fact a critical darling as it were and almost universally lauded. Granted the AC franchise still has its haters but on the whole is a series many gamers love… unless you make a big deal out of nothing and complain that there aren’t enough girls in the game (something that was remedied quickly by the dev team). That’s a topic for another time but in an era where women couldn’t even vote it seems more historically accurate any ways, to which my own wife agreed; *duck and cover*! I will say that the response to the issue could have been handled MUCH better than it was initially but, I digress… 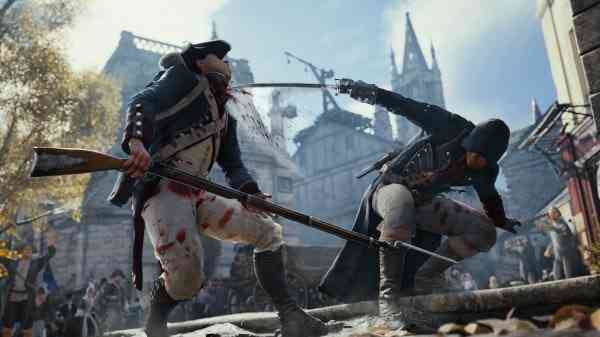 Nov 11th of this year will see the first Assassin’s Creed developed exclusively for our current gen consoles. By not being ham-strung with adapting to last generation systems the dev team at Ubisoft Montreal (and 9 other Ubisoft studios for back up) is taking full advantage of what the PS4 and Xbox One can do. Players will take on the role of a young assassin named Arno in the midst of the French Revolution in the year 1789. The people have finally found the courage to stand up to the oppressive aristocracy of King Louis XVI and everywhere you turn there’s conflict and uprising on the streets.

I had the opportunity to sit in a behind closed doors demo back at E3 this year with a member of the AC: Unity team to get a bit more information about the game. The first thing that is really noticeable, especially if you’re a fan of the franchise to begin with, is the size and scope of pretty much everything in the game. One of the first locales in the demo that Arno visits is the grand Notre Dame Cathedral. It’s magnificent to take in and according to the staffer on hand almost exactly to scale. When approaching the door Arno walks right into the building without a loading screen anywhere in sight. That might not seem like a big deal really but for someone who has waited countless hours between areas in previous AC games this is a life saver. Almost all major landmarks in 18th century Paris plus up to a quarter of other buildings in the city will be accessible by players. Taking full advantage of the new infrastructure the interior of the cathedral is equally as impressive as its exterior. Massive in scale with god-rays piercing the windows and dust particles floating on the breeze it is a spectacle.

Another aspect that players will pick up immediately is the ease with which our new assassin moves. At times it looks borderline inhuman but watching Arno parkour up and down buildings is quite the sight. It gives a much greater sense of speed to everything as well as ramps up the excitement of bounding from rooftop to rooftop. Speaking of rooftops, gone are the days of escaping pesky guards patrolling the city streets from high up above. This allows players to properly assess the world below and carefully choose their next plan of action rather than frantically try to evade attack. Not only that, players will be able to see mission icons on screen that serve as an active mini-map from this vantage point as well which will essentially remove the need to pause the action to gain your bearings.

The city streets of Paris are alive with guards, commoners, rebels and everything in between. Early in the demo I’m treated to a crowd of around 500 people. I’m told that nearly every NPC will react differently to Arno based on emotions of anger, fear, indifference etc. Not only that they’ll interact with each other in ways we’ve never seen with different factions fighting and bartering being done in the markets to name a few. As I approached the end of the demo there was a crowd of nearly 2000 doing the same thing and the Ubisoft rep was quick to tell me that this could be pushed to crowds of 5000. I remember when 20 people on screen at once was unimaginable and now you’re trying to tell me that you can do 5000!? Colour me impressed! Having so many people to interact with opens up many more options for stealth as it’s easier than ever to blend into a crowd. This is important to note because gone also are the one stab kills stringing victim to victim. Ubisoft Montreal wanted to remind players that assassins are supposed to move swiftly and silently evading detection in order to complete their missions. Combat is much harder than in some of the previous entries in the series. 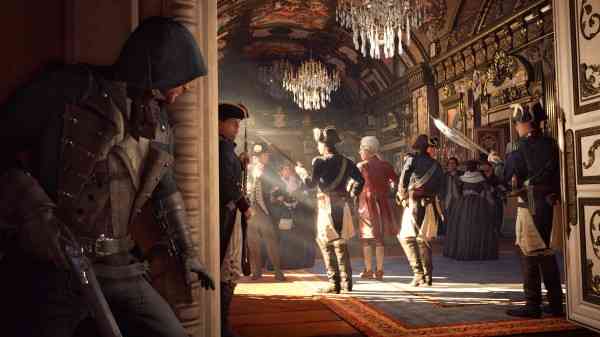 The question on nearly everyone’s mind going into the demo was exactly how the multiplayer co-op we saw way back at the E3 reveal would factor into the game. While I didn’t see any of that in action I asked the member of the dev team a little about it. While it is possible to advance Arno’s storyline exclusively on your own there are certain missions in game that are designed with co-op in mind. Whether it’s assassinating a Templar agent or sabotaging an execution these missions will have multiple paths and solutions that will allow players to team up with up to three more friends to complete. It seemed to be a common theme at E3 this year but playing with your friends, rather than just against them (PvP), is a trend that looks to be on the rise and I welcome it very much.

Assassin’s Creed may be riding the line of too much, too often but with the jump into an exclusive ‘next gen’ game and some new mechanics Ubisoft is hoping to save themselves from the annual release staleness. Even as they take the franchise forward they also take it back a bit in terms of difficulty and stealth to make it the most authentic AC experience in a while. With only days to go until its release gamers everywhere are excited to get their hands on it!