We had the chance to head to the 6th floor of PAX Prime to check out an indie title called Super Dungeon Bros. Every time I see a game with the word “Bros.” in the title I think that it is going to be a game made in vein of all the 2D Mario Bros. platformers that may have come before it; but man, I could not have been any more wrong. Super Dungeon Bros. is a game that will inevitably be compared to the Gauntlet series, and rightfully so. It’s a four-player cooperative game that, when I got some time with the pre-beta version, was quite fun.

For the uneducated, Super Dungeon Bros. is an isometric hack-n-slash dungeon crawler. You’ll be playing with up to three other people as you kill numerous enemies in search of, you guessed it, treasure. Each character seems to have a ‘heavy-metal’ theme to them. Axl, Freddie, Lars and Ozzie are your characters and you can choose to use ANY weapon. This is where Super Dungeon Bros. separates itself from other similar Gauntlet like games. From heavy swords, ranged weapons to magic, you get to choose what style you want to play. 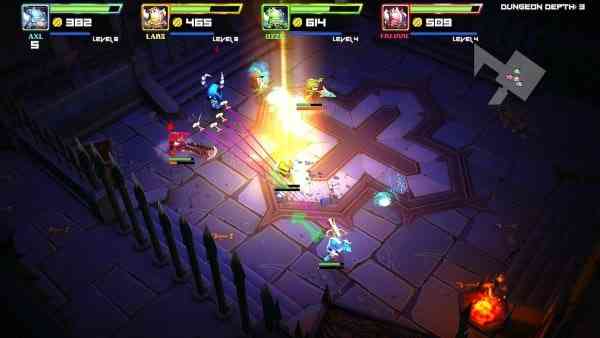 As we played on the Xbox One during the opening hours of PAX on the Sunday morning, many tired people walked around the floor in a daze, but we managed to learn that each dungeon you play through is randomly generated, so repeated play will not be a monotonous experience. The randomness of the dungeons adds some replayability given the fact that when the game launches there will be only three areas, each with 5 dungeons to explore. I like that you will be able to play over and over with different friends and not have to worry that you’ll just being doing the same levels again and again.

Another great feature, in my opinion, is that this game has cooperative play that is both online and couch (local). So in essence, if you have a couple of friends over at your house, and another who couldn’t make it, you can combine your cooperative efforts both locally and online, with any combination of players. Being able to play with folks in the same room, online, or both, is a great feature as it doesn’t limit those friends who you want to play with. Of course games of this nature are always fun when sitting in the same room, but having options isn’t a bad thing either.

“It wasn’t necessarily the deepest game I’d ever played, but there were features that really made it a fun cooperative experience.”

Visually the game is already looking solid. The characters have a style of their own which makes it standout from other similar games. The dungeon we played through was in a castle like setting with brick walls, giant swinging axe traps, and dangerous spike floors. There were lots of enemies too, from skeleton soldiers to skeleton archers who made every effort to stop our progress. The final boss level was CRAZY and there was some slowdown, but this game is in pre-beta so I wasn’t too concerned. Bottomline, the game looks fairly good and it is unique enough for people to realize it’s a game of it’s own making.

So is it fun? Well, with the limited time I found myself enjoying it. It wasn’t necessarily the deepest game I’d ever played, but there were features that really made it a fun cooperative experience. You can pick up your teammates and use them as weapons as you hurl them at the enemy. You can also have all your characters stand on top of each other and launch a devastating tornado like attack that truly doles out the “smackdown”. What was evident was that you just didn’t run around aimlessly, as there are subtle sections where you need to work as a team. This adds a bit more to the gameplay and playing with friends can be rewarding, but if you want, you can pick them up and toss them over the edge just for giggles too. 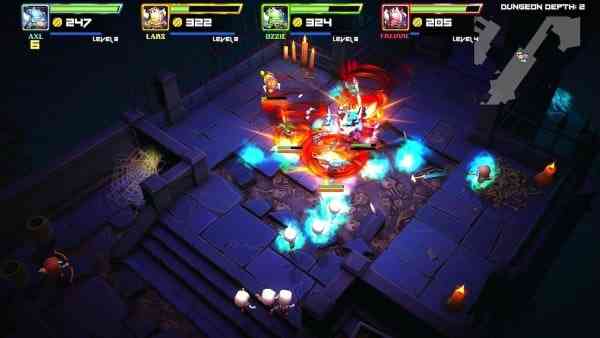 One final point, the developer who was walking us through the demo did let us know that the game has a gradual skill curve, and the deeper you go the harder it gets, and he let us know that it can get pretty hard. The boss level we played was a small indication of such, as wave after wave enemies started to overwhelm us, and I met my untimely demise more than a few times. I will be interested to see how this game plays in the deeper levels. Oh, and speaking of death, you’re ability to respawn lies in one of two methods. You have a pool of “team lives” that you can use and when this is depleted it is game over, or you can be revived by your teammate.

It’s always hard to get a full assessment of what a game will be like when released, especially when you only play for about 25 minutes or so, but what I did play was pretty enjoyable and showed a lot of promise. I really do have my fingers crossed that this game delivers when it’s launched. As for that launch, there is no hard release date, but they are hoping it comes out sooner than later.

Next Razer Wildcat Preview – The Xbox One “Pro” Controller Market is Getting Crowded
Previous Layers of Fear Preview – Should be Called ‘Layers of Scare’, as this is a Creepy Game