To my surprise Razer has recently announced a new Xbox One controller that they are entering into the “Pro” category. Why pro you ask, well, the controller has a whole lot of features that set it apart from your traditional Xbox One controller. Of note is that it has extra triggers and bumpers built onto the controller and it has programmable buttons allowing you to map out what feels right for you. Now this controller sounds very similar to Microsoft’s own Elite Controller, but based on my time at PAX with it they are actually two very different looking and performing controllers. 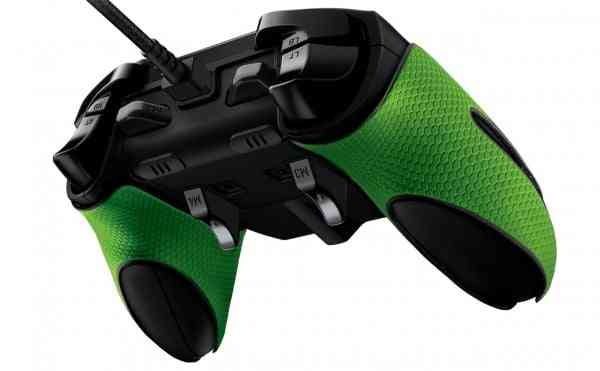 I had the chance to check the Wildcat Controller at Razer’s PAX Prime booth just over a week ago, and I have to say that this is not your traditional Pro Controller. Our friendly Razer rep discussed with us how they worked in tandem with eSports players who talked about some of the features that they wanted. One of the most requested ones was that players wanted a light controller for extended play sessions, and that is why Razer went with a wired set-up. Yep, you heard me right; this controller is wired therefore you are tethered to your Xbox One. Another reason for the wired functionality is that they wanted there to be zero chance of any input lag when playing. The braided cord is 10 feet long and when asked why it is not longer they stated that any longer may result in the aforementioned input lag (hey, I am just telling you what they told me).

When I first held the controller I was really surprised with how light it was. I almost thought it felt cheap, until I looked at it closely, and realized that there is a lot of manufacturing that went into it and it doesn’t feel flimsy or bendable. The first visual clue I had that this controller is not like any other “Pro” controller I have checked out in the past was that there are four extra ‘buttons’ on it. The two extra shoulder buttons are just that, two extra buttons in between the original shoulder buttons. Then I took a look underneath, and I discovered two extra trigger buttons that are removable. This controller does not look like your traditional “Pro” controller, most of which use paddles.

“All in all I was sceptical about checking out this controller, but after playing around with it, and using it to around in Halo: MCC, I am definitely intrigued.”

I think for me the biggest thing I thought of, and experienced with my brief time with it, was that it will take some getting used too, even more so than a controller like Microsoft’s Elite Controller. The extra shoulder and trigger placements take a lot of getting used to as they are not paddles which sit in an area that feels a bit more natural. That being said, the new button placements for these are not so out of the way that you can’t use them, I would suspect that with practice their use can become somewhat second nature.

As you can see from the pictures, there is a lot of use of the Razer Green colour, but don’t fret, these are optional. The green on the analog sticks and the green textured sides are add ons. You don’t need to use them. I played with the controller without the textured sides. When I asked about them they stated that if you choose to use the textured sides that you actually apply an adhesive then put the textured surface on it, and once it is on it’s not coming off. So this is something you have to choose carefully as it cannot be undone. 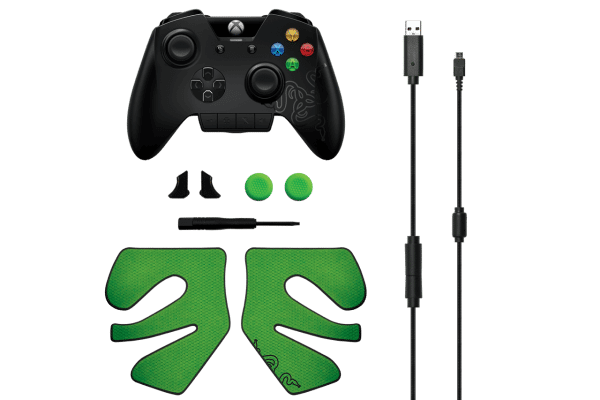 Two other things worth noting based on my brief time with the controller, the 3.5mm jack that is included also has the audio controls on it. In a sense it looks like the Microsoft headphone adapter, but it’s not, as it is part of the Wildcat’s ‘Control Panel’. You have all your main controls such as game volume and mute at your fingertips. The other thing that was quickly mentioned was that you don’t need an app to map your buttons. How this works I do not know, but there is a remap button on the controller’s Control Panel. If this is a true feature than it is a cool one as you won’t have to get off your Xbox One to program your buttons.

All in all I was skeptical about checking out this controller, but after playing around with it, and using it to run around in Halo: MCC, I am definitely intrigued. Razer is planning to sell the Wildcat for $149.99 USD, which puts it up there in price with the Elite Controller from Microsoft. If one thing has become evident, is that the “Pro” controller market for the Xbox One is becoming a whole lot crowded and gamers have a lot of options to choose from and Razer’s Wildcat might just be one of those options worth looking at, if you are willing to consider the price.