Like many other Japanese games of a similar ilk, the Dragon Quest franchise has been around for ages. I was just a husky 12-year old obsessed with the A-Team and playing Baseball Stars on the NES around the time the first Dragon Quest game touched down. Nearly 30-years later, the series is still going strong and after diving into some playtime with Dragon Quest Heroes: The World Tree’s Woe and the Blight Below (yes that is the full name in its entirety) at PAX Prime last weekend there is no question the franchise remains in great shape moving forward.

Dragon Quest games have always maintained a strong RPG element. Dragon Quest Heroes is no different; however, there is a huge hack and slash aspect which should make it a little more appealing to younger gamers. In some ways, it almost has a Skylanders feel to it but with significantly more enemies and chaos on the screen. This Dragon Quest game has a faster pace and massive world which isn’t slowed down by any of those RPG elements that have a tendency to grind many games to a halt.

What makes Dragon Quest Heroes stand out above all else is its accessibility, mainly to those who have little to no experience with the franchise. You do not have to be familiar with the games lovable characters or previous storyline. You can jump right in and play without much of a learning curve at all. This was evident from the get go when I played the demo on the PS4 at PAX Prime.

The basic premise involves a dark magic that has taken over the city of Arba which has turned the cities lovable creatures into cranky cantankerous monsters. Luceus and Aurora, our main heroes, along with other Dragon Quest characters must embark on a journey to rid the city of the evil and return all the characters back to their lovable selves. All in all, it is pretty straightforward stuff yet remarkably there is layers and layers of depth which was evident with the amount of dialogue and interaction we witnessed in the game.

“It is truly a labour of love for the development team and fans of the franchise will absolutely be pleased.”

One of the first things that jumped out at me was how vibrant and colorful the game environments and characters are. Everything is bright and looks stunning in HD. Not to mention the art design is equally impressive. It is truly a labour of love for the development team and fans of the franchise will absolutely be pleased. The dialogue on the other hand is nothing special and comes across as awfully cheesy, but it’s more than appropriate for kids of all ages.

Much of the gameplay involves hack and slashing your way through hordes, and I mean HORDES, of Dragon Quest monsters. Some involve a simple strike or two but others require the use of some of your special attacks or the use of magic. As you progress along this mostly linear experience you can level up your character and upgrade your unique spells and abilities. These spells can be used to unleash devastating attacks where the end result is pretty damn satisfying. 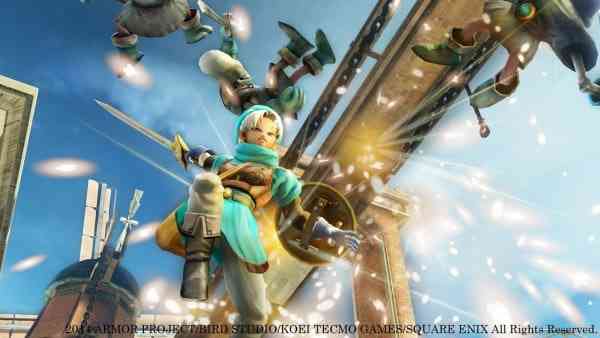 In the game you control one hero while the AI controls the other three allies who follow you along your journey. Swapping between the various characters strategically helps you survive through the toughest battles and can assist in ultimately take down some of the larger monsters. Swapping between characters is accomplished with ease and was a seamless experience from the bit I played.

Gathering monster medals from defeated foes turns monsters into allies. This also becomes a critical gameplay tactic in order to proceed in the game. Fast and heavy attacks will only take you so far, so swapping characters, using special attacks and summoning a monsters who can do some serious damage is the name of the game. We are told up to 24 monsters can fight by your side at any one time.

Dragon Quest Heroes: The World Tree’s Woe and the Blight is already out in Japan and it’s selling like hot cakes. After spending some time with the North American version of the game at PAX Prime 2015 we can certainly see why Japanese fans are loving it as it was easily one of our most pleasant surprises from show. It’s enjoyable, accessible and features stunning visuals. If it doesn’t do well in North America it will be unfortunate because so many would be missing out.

Dragon Quest Heroes: The World Tree’s Woe and the Blight arrives next month for PlayStation 4.