Stick It to the Stickman Preview

Stick figures have been around for a good long while, and they aren’t going anywhere soon. A simple icon, representing a person can take on all sorts of meaning. Whether through context, repetition, and subtle juxtaposition, a seemingly simple image can take on any sort of meaning. Stick-figure violence was a major part of the early online video game meme scene. With a plethora of possibilities, it’s unfortunate that Stick it to the Stickman isn’t about much at all.

When you first enter the tower that is the setting of Stick it to the Stickman, you’ll be forgiven if you think of Donkey Kong. There’s a similar design ethos where you cross a floor and then ascend a ladder to the next, zig-zagging your way to the summit. You are a blue stick figure. As you ascend, you’ll be assailed by mobs of red stick figures. Combat is as simple as can be, and button mashing the attack button tested little more than my patience. As you grab upgrades (Stick it to the Stickman is something of a roguelike), you can edit your chain of attacks, adding different and stronger moves. 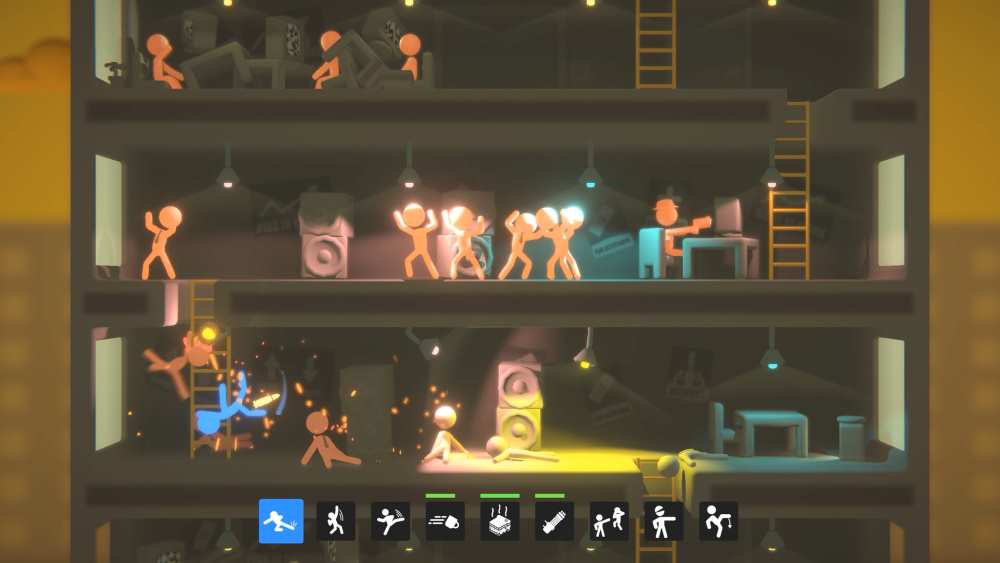 I think a big part of the appeal of Stick it to the Stickman is the physics-based combat. Attacks are most different in enemy reaction. An uppercut will send a foe at the ceiling. A roundhouse kick does a bunch of damage and sends the red stickman flying straight back. The main strategy of the game comes in how you set up your attack chain, mastering which directions the enemies will fly in to grab some room to breathe. Before too long enemies will swarm you, and their health point pool feels large.

While always-evolving physics-based beat-em-up sounds like a fun idea, Stick it to the Stickman doesn’t feel right to me. It’s kind of how after years of Super Smash Bros, other mascot fighting games don’t feel as tight. The controls and response in Stick it to the Stickman feels too sluggish, and too weightless. While occasionally you’ll feel the crunch of a huge impact, most of the fighting feels like it’s happening underwater. You don’t have enough control over the flow of a fight to make very meaningful decisions, and when you’re button-mashing, you want a much more responsive character.

There’s also a stylistic element in Stick it to the Stickman that doesn’t work at all. If you couldn’t grasp from the title, it’s sort of a satirical send-up of office culture. Weapons include things like staple-guns, coffee mugs, and fork lifts. Stronger enemies wear a tie; the boss fights are quite literal. And top to bottom, even in the game’s description on Steam, there’s a sort of faux-positive-office-speak thing going on. But the office in Stick it to the Stickman doesn’t actually feel all that familiar to me. 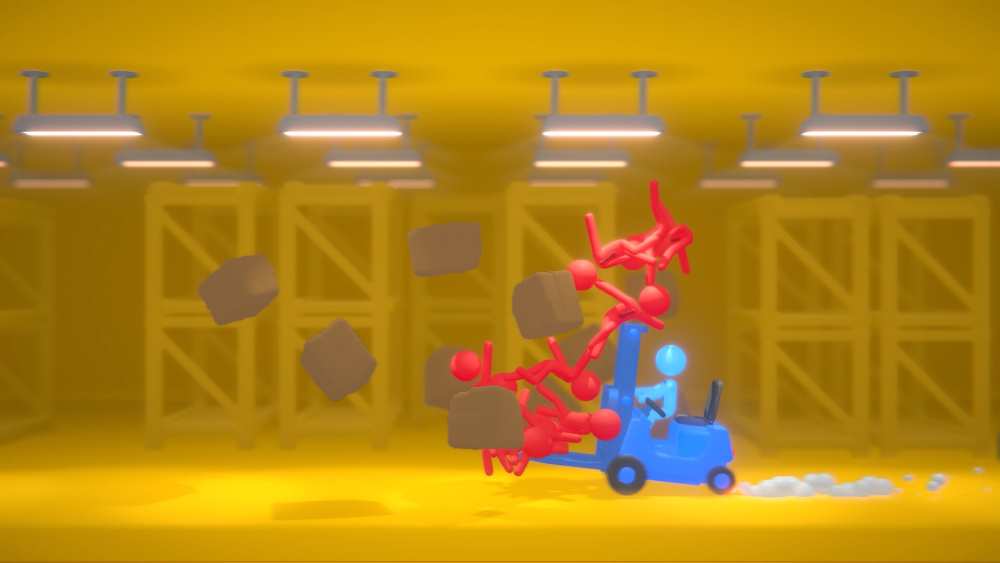 I’ve worked in an office. I have friends who work in offices. Nowadays though, a lot more of them are working from home. I don’t encounter a lot of supervisors with big dreams of climbing the corporate ladder, or who present their workers with doublespeak and false smiles. Not to say the bosses of modern business always give it to you straight. But Stick it to the Stickman isn’t really getting at any of the injustices or even idiosyncrasies of modern office life. Nothing rises above the level of a watchable sitcom.

Which sort of is the biggest bummer of all. I get wanting the catharsis of beating up your boss and co-workers. And I’ve had weird passive-aggressive fight about how to use public spaces like the fridge. But pointing that out with incidental dialogue from a boss fight is eye-rolling. Do I need a deeply thoughtful political screed against modern capitalism? On a level, yeah. I would have had much more fun in a game about ninjas. Or werewolves maybe. Or nearly anything else. There is plenty of dark comedy to be mined from offices. There was just a hit TV show, Severance, that got all sorts of awards buzz. Stick it to the Stickman is more like reheated leftover jokes from Office Space, jokes that lived and died in the 90s, more than twenty years ago!

I don’t know what sort of gamer would enjoy following this game as it develops. It might be worth a look if you like 2D action brawlers, but there have been a whole lot of really good ones lately (the Ninja Turtles collection comes to mind). And maybe you fall into the exact demographic for the joke of this game. You work in a corporate office in a cubicle and someone is always telling you they’ve got a case of the Wednesdays. Maybe this game is offering the exact catharsis you are looking for and I am cruelly denying you that through my criticism. If that describes you, I apologize. For anyone else, you may want to wait for something major to change.