If there’s one thing that everyone loves, it has to be…dinosaurs. I mean, come on. They were big freaking monsters and they were actually real. It’s a good thing they went extinct a very long time ago, because there are a lot of videogames that pit humans against dinos, with the goal of wiping them out. Exoprimal is one of those games.

During July and August, I had the chance to play a bit of Exoprimal’s network test. While it didn’t include anything like the full game, it was enough to give me a sense of what it’s all about. A test drive, if you will, minus a lot of the features that will come with release.

Exoprimal is a blend of squad-based PvP and PvE combat. You start a match with a team of five soldiers. Classes come via the specific exosuit you and your squadmates are wearing. Some of the suits turn you into a damage-dealing melee or ranged character, while others give you the ability to heal or use energy shields. Thanks to the ability to switch suits on the fly, combat has a flow where teammates are responding to the demands of the moment. Of course, you don’t have to change. You can stick with one suit, and teamwork be damned!

At least for the initial part of the run, your foes are dinosaurs. They drop from the sky out of a singularity, because…videogame. They’re fast and mobile, a bit like zombie hordes, only they’re raptors, triceratops, and tyrannosaurs, with the big dinos taking the place of mini-bosses. Some of them can snipe you with lasers. Because apparently, that was a thing back in the Jurassic period.

Another team is running the same gauntlet as you, and they show up as ghostly images so you see where you stand. It’s one of the cooler ideas in Exoprimal, and it really helps push you forward. 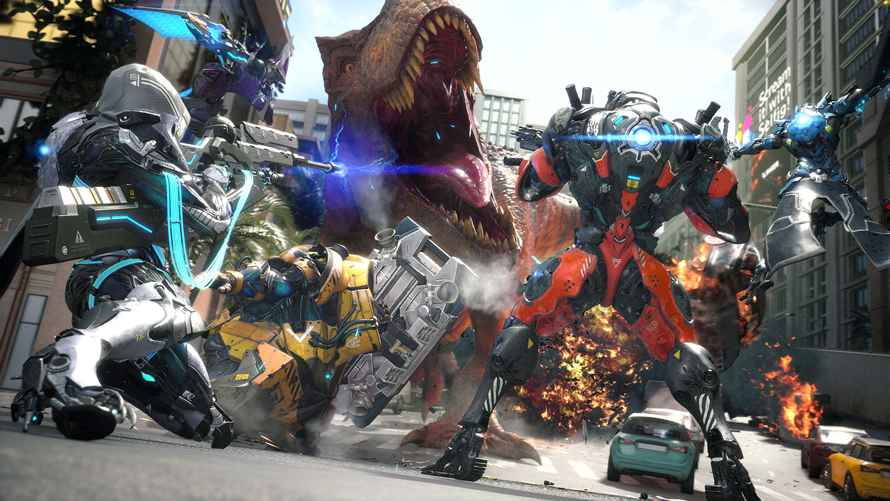 The end of each match switches gears and throws you into one of two PvP scenarios. In Data Key Security, you escort a slowly moving piece of gear towards the finish line while fighting off dinosaurs and other players. In Energy Drain, you and the enemy team run around the map, tagging objectives and earning points. There isn’t much in the way of tactics or strategy in either of these scenarios. While the dino-killing sections relied on wearing the optimal exosuit, the final sections seemed far less deliberate. I’m guessing there was a narrative thread that weaved the two mission parts together, but I missed it.

Only a few of the ten exosuits were available, and even fewer maps. The setting a is near-future time, with cities turned to post-dino-apocalypse rubble. The environments weren’t terribly memorable, but seeing the dinosaurs — more-or-less to scale — was fun. Still, after playing several rounds over a couple of playtests, the flow of combat became pretty repetitive. As it probably would in real life, fighting a brontosaurus for the twentieth time starts to lack novelty. 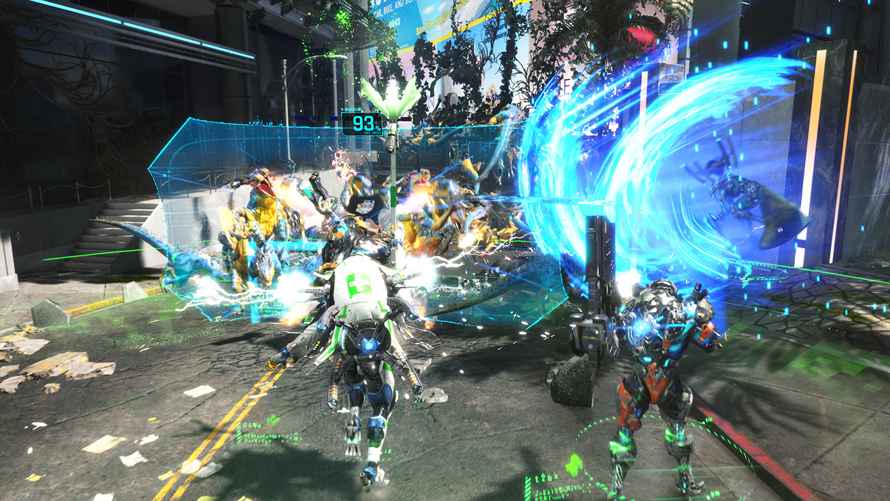 Beyond the cool factor of gunning down thunder lizards, Exoprimal’s well of original ideas seemed a little on the shallow side. Parts of Exoprimal were a lot of fun, and I’m hoping that a full range of maps and even more of our favorite dinosaurs make it into the final game. I’m actually looking forward to seeing how it all comes out. 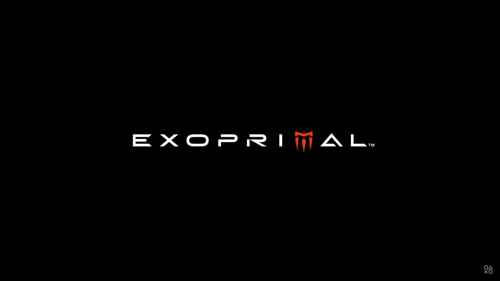