Prodeus is a Throwback to Gnarly Retro FPS Games

A first-person shooter inspired by classic titles of the genre, Prodeus looks to utilize modern techniques and gameplay improvements in conjunction with the retro-FPS aesthetic. While other games have employed a similar vision with their games, Prodeus does a great job in making the game (early) accessible to anyone, including those who may not enjoy classic FPS titles compared with their contemporary equivalents. As someone who is not a big fan of the fast paced FPS genre of games, Prodeus almost immediately pulled me in.

According to the game’s Kickstarter page, “you play as a corrupted agent of Prodeus, hell bent on destroying your creator and everyone that gets in the way.” Without doing this research, the game also provides a brief description at each level that provides some context of the level’s background or objective. Is there much of a story here? Did I really care? No on both accounts. While there wasn’t any context as to why I was tearing through levels of enemies, it didn’t take away from the experience at all, and I expect the full release to have a bit more story material.

The primary gameplay loop of Prodeus is its first-person shooting element. Players must make their way through various levels through some platforming, exploration, minor puzzles, and shooting. The combat of the game is its main attraction. Throughout levels, players will encounter enemies along various paths, or within rooms that spawn enemies in a sort of mini-arena. Players will utilize the weapons found in order to dispatch these enemies. In the early access review build we had access to, there were weapons such as pistols, shotguns, rockets, and more. However, there were a number of weapon slots that had remained unfilled.

The combat itself is exciting, fast-paced, and fun. The feeling of clearing a room with almost any weapon in your arsenal felt fun. However, it did get a bit repetitive after a while, especially if you start growing attached to any specific weapon. Personally, the shotgun was a favorite of mine, but running out of ammo does force you to switch things up from time to time. The enemy variety is a bit lacking as well, with only a handful of different ones thus far, though the game can add more in future levels. Despite the lower variety, the amount of fun you can have shotgunning an enemy in the face or blasting them with a rocket from across a map is immense. One point to note, is that the game comes with plenty of difficulty settings, letting both newcomers and veterans play to the level that they desire.

Aside from the typical levels that have you exploring, searching for keys, killing enemies, and reaching the end point, there are a couple different level types as well. Specifically, there are levels that are strictly arenas in which waves of enemies come at you, as well as trials that have you competing for the high score. These varieties in levels help to break up the action between levels that are relatively similar in nature. It should be noted though, that each level has a particular mechanic that distinguished itself from others, such as the continuous vertical climb of a level, or the need to return to a nexus-like area of a level. In addition to the campaign and its levels, the game comes with a level editor as well as the option to download and play others’ campaigns and levels. 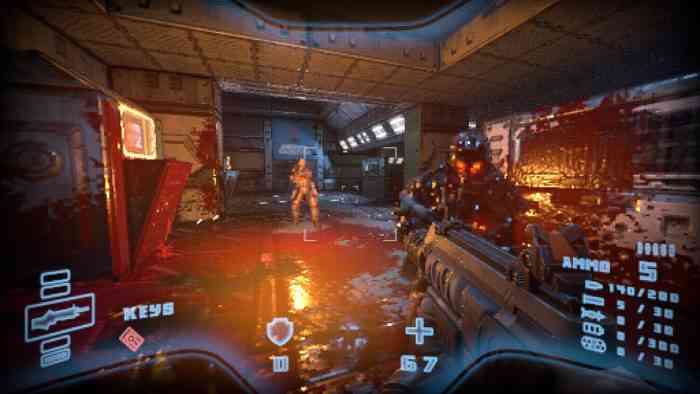 For a game inspired by classic retro-FPS titles, Prodeus definitely looks the part, or at least, looks like what we might remember retro FPS games to look like. The title definitely utilizes contemporary advancements and designs in making the game look retro while simultaneously feeling like a modern shooter. The game’s unique aesthetic is immediately exemplified in pictures or videos. Likewise, the game’s artistic design in its explosions, blood splatter, weapons, enemies, and environments are consistent with the gameplay and implied narrative.

With regards to the overall gameplay loop, level design, and combat of Prodeus, the game is extremely enjoyable. With its fast-paced combat and at times frantic rush of enemies, there was hardly a dull moment when playing through Prodeus. Even running through the various trials to achieve the top scores was a rush, even if it meant restarting the level just 5 or 10 seconds in many times. While audio is typically its own section, its important to note it alongside the gameplay here. The retro sound effects of guns and explosions work extremely well alongside its heavy metal soundtrack both in terms of creating a “frantic” feeling as well as making you feel badass. In short, it is as much of a soundtrack to the game, as it is to your onslaught. Besides a few repetitive aspects of the game (which may be changed or adjusted during early access), there isn’t much to knock Prodeus about in its current state. The moment-to-moment experience is fun, and it will definitely be a game I expect to come back to in the future.

For a game launching for early access, the game’s core mechanics feel pretty complete. While there is a noticeable gap of content that remains to be completed, Kickstarter backers and fans of the game should have any doubts alleviated. As someone who does not particularly care for contemporary fast-paced FPS games, Prodeus has easily been one of my most enjoyable games played so far this year. While the experience at times felt relatively long due in part to a completion percentage that is still low at the end of build, I am still excited to experience more of the game as it continues to develop.

Prodeus is Shaping Up To Be a Killer Classic/Modern Doom Hybrid
Next Gloomhaven Digital May Be the Best Way to Play Right Now
Previous In Death: Unchained’s Latest Quest 2 Update Makes the Afterlife Beautiful