Per Aspera is Massive and Its Depiction of Mars is Fantastic

Punch “Make Mars Habitable” into the Google Search bar, and you’ll see no shortage of studies, articles and think pieces exploring the possibilities for transforming the Red Planet into a liveable place for future colonies of the human race. For many, the final frontier holds hope, optimism and even the key to eminent success for the long-term survival of humanity. We’ve watched dozens of movies and television shows themed around colonizing Mars or other foreign planets. We’ve seen Elon Musk’s face in the media more in the past few years than we’ve seen our own mother’s. We’ve also played our fair share of games representing this same conquest, with titles like Surviving Mars, Planetbase, and Oxygen Not Included, to name a few. Tlön Industries’ Per Aspera plans to be the next addition to the world of space colonization games, marrying heavy narrative focus to the likes of Firewatch with classic base building simulation. In an exclusive preview with the developers and a chunk of hands-on time with the demo, I caught a glimpse of what Per Aspera could be in the future.

Building Towards the Future

Per Aspera positions you as the artificial consciousness of AMI, the AI responsible for leading the difficult mission to terraform Mars and prepare it for humanity. In the demo version I received, I was only able to experience an abridged version of the in-game building and simulation elements. I cannot speak to the narrative that will be tied into the full version, nor did I play through any dialogue or story setup whatsoever. I currently have very little concept of the supposed crossover between narrative and simulation genres, but hopefully we will have more to report soon.

Much of the base building is standard practice for games in the genre: You build solar farms to power your facilities, mines to extract natural resources, and factories to refine goods or create worker drones. Additionally, you must place essential buildings and structures such as water extractors, food factories and living quarters to support the humans that will eventually arrive to help research technology and carry out other tasks. None of this will be new to anyone who has played a colony sim before, and Per Aspera’s humble, top-down resource management formula seems content not to reinvent the wheel. Based on my hands-on experience, I am expecting the narrative component to be the secret spice in the game’s otherwise conventional sauce.

Because the demo did not feature a tutorial or many helpful explanations outside of an in-menu codex, I found myself confused at many points about managing my resources. On top of the typical and expected struggles of producing enough energy and acquiring enough manpower — or, in this case, droidpower — to carry out construction projects, I was challenged in simply figuring out where my resources were going and why they were not being applied to my pending buildings. I spent months in the game trying to operate my Maintenance Factory, which relied on Polymer as an input resource. After confirming that my Polymer production was at 100 percent efficiency, clicking around to discover that I had 36 units stockpiled and only my Maintenance Factory creating the demand for Polymer, I was perplexed as to where my Polymer was going and why it was not filtering into the factory. Even after raising the priority of the building, which seemed to be one of the only ways to get anything done in the game, I could not figure out why this was the only resource not automatically transporting to where it was needed. Perhaps this was a bug in the demo, an oversight on my part, or something that would have been explained in a version with a tutorial, but it was far from being the only confusion I encountered when trying to manage my resources and progress with building projects in the game. 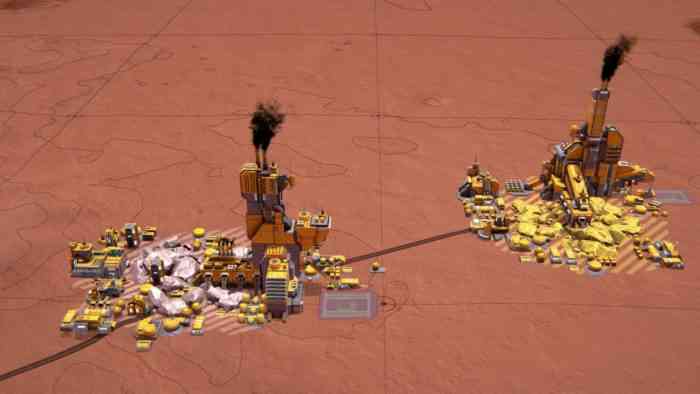 While most base building games support the establishment of up to a few hundred buildings, Per Aspera scales up to allow for thousands. Rather than zeroing in on one section of a map, you truly have the entirety of Mars at your disposal. At any point, the camera can be zoomed out far enough to see the planet as a mere globe in the middle of the screen and spun around to view any area on its surface.

One standout thing worth noting is that the game’s representation of Mars is not an artistic rendition — the topology is actually based on real maps generated by NASA, and has been replicated with impressive detail. During the game, you will also encounter rovers and other spacecraft launched in real life that will have landed on the planet by the time the game takes place, such as the Perseverance rover. I applaud the developer’s ambition to make the player’s perspective feel as if you are truly looking down on Mars through the window of a space station, and the real-life touches are extremely neat.

Visually, Per Aspera seems polished in its performance. Building placement and camera movement is smooth, scrolling is fast, and there seemed to be no issue with overall choppiness or staggering. The game was developed fully in 4K and the graphics are crisp and clear, though the modest art style leaves little detail to be admired. 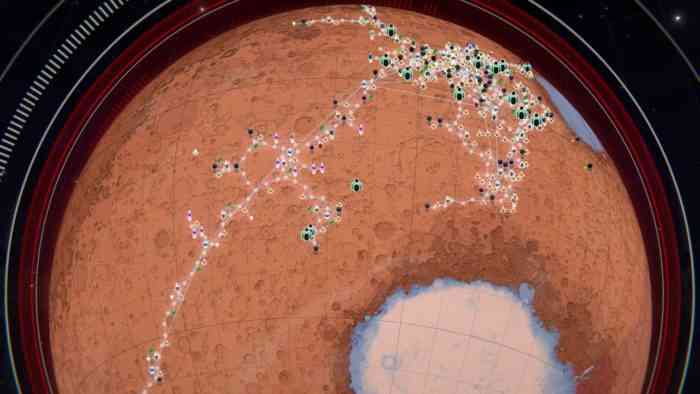 Though my gameplay experience was a bit restricted, I was able to ask developer Damián Hernaez about other simulation elements we can expect to see in the final version. Regarding the game’s humans, we will not see a huge human interest in ways similar to Surviving Mars or Rimworld, where we care about their personalities, needs, happiness or desires. It doesn’t seem as though we will be concerned with keeping them entertained or decorating their surroundings to beautify their living spaces. Per Aspera takes a much more macro approach, where the focus is on large scale production and managing supply lines. Though we will interact with the humans throughout the narrative, they will be treated more like resources — at least in the beginning.

Based on the game’s most significant trailer and confirmation from Hernaez, it’s apparent that conflict will be tied into the gameplay somehow. It doesn’t seem as though we’ll see any combat mechanics such as turn-based strategy or horde systems, per se, but it was confirmed that conflict will be a main part of the narrative that will eventually reflect in the gameplay itself. I’m curious to see how this will manifest, and look forward to exploring this when the developers feel comfortable releasing more information.

It’s difficult to form any definitive expectations or opinions based on the limited look I had at the game, but upon first glance, I am both excited and intrigued to see more. It seems worthy of keeping an eye on for players who love large-scale games with a focus on managing resources and supply chains, but it may be a bit dry for gamers who enjoy giving more of their attention to the wants and needs of the humans in the colony. Simply put, it’s just not that kind of game. I am interested to see how the narrative will be woven into the game, and am curious about how deep the story will be. Though the artwork doesn’t particularly stand out and the building mechanics are pretty cut-and-dried, the scale of the map and the realistic depiction of Mars is impressive. When the time comes, I look forward to continuing my expedition to terraform the Red Planet.

Per Aspera is slated for release later this year.


Way of the Hunter Reveals All With New Explanation Trailers

Way of the Hunter Unveils Animals of Transylvania
Next Despite Its Name, Immortals Fenyx Rising Seems Promising
Previous Dirt 5’s “Playgrounds” is Creative and Will Keep You Coming Back