You’re in Melbourne, Australia, so what do you do? Get a cup of coffee, of course. But in Necrobarista, there might be strings attached, since at least one of the city’s many cafes doubles as a hotbed for necromantic intent (necromantic being a word I discovered existed only now). The recently dead arrive in the café run by the magical characters…and do what exactly? While many details of the larger story are as of yet unclear, there are a few reasons you should keep your eye on this one.

With art inspired by anime and a story modeled after Japanese visual novels, I found the character designs well-made and interesting but the actual graphics of the character models a little rough and ready. The backgrounds and atmosphere reflect the hard work put into the game, however, with the play between light and dark and the vibrant greenery, and I know from talking with the developers that a lot of care is being put into the creation of Necrobarista. And it’s funny—the dialogue is both laden with meaning and totally funny, which is really the number one ingredient I need in a game like this.

Even if they don’t improve on the rough patches, there’s one mechanic that Route 59 was pushing at PAX West that keeps it fresh. It elevates the game to something really different and revolves around the way that the story tags work. As you play Necrobarista you can click on highlighted words on the text and unlock information or miniature stories (think Hemingway’s “Baby Shoes. For Sale. Never Worn.” Then you choose which of the tags you’d like to keep in your inventory, and at the end of the cutscene the game will take those tags and use your combination of them to tailor the next chapter of the game. 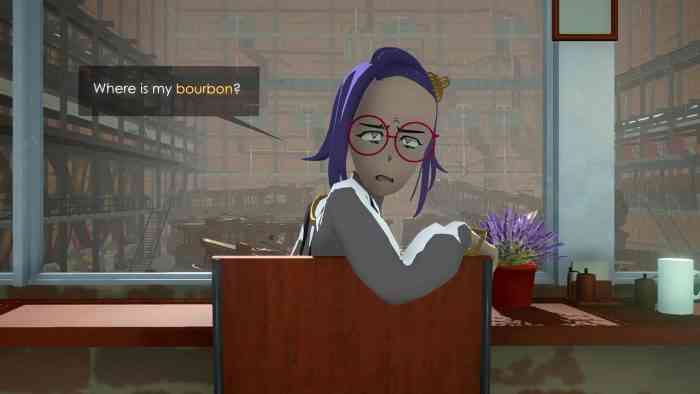 These story tags and the just plain funny juxtaposition of being both a barista and being someone who plays with the border between life and death (although I’d argue many Starbucks employees already have this down) make this game very promising. I’ve never seen anything quite like it in before, and I’m interested to see where Necrobarista is heading from here. Slated for release on PC, PS4, and Switch in early 2019, I know where I’ll go for my next cup of coffee.