Like many people, I have something of a love-hate relationship with Steam’s Early Access system. On the one hand, I’m in love with the concept of a developer selling their mostly finished work-in-progress for a largely discounted price to get some player feedback while also keeping the lights on, and the player gets to enjoy the full game upon its release without paying anything extra. This is a great concept. Unfortunately, being humans, we know exactly how to screw up a good thing. This often takes the form of largely unfinished games selling promises for $40. This, I hate. It ruins the system for everyone who wants to use it properly. It leaves consumers with a bad taste in their mouths, and, as a result, it leaves many trustworthy developers without the consumer trust they deserve. Recently having entered Early Access with the hope of having a full release sometime in the next three months is the game Green Hell, a game that I would absolutely love to see make full use of its time in Early Access.

I should start off by saying that Green Hell absolutely should be in Early Access and should not be sold as a finished product. It’s not done, and it shows. It’s very rough around the edges, lacks basic mechanics (that honestly probably should have been in from the beginning), and has some real issues with balancing. The only one of these things that really bothered me in my time with the game was the lack of basic mechanics. Things like being able to delete previous saves. It’s not a critical issue, but it’s such a basic part of handling saves that its absence makes an impression. There are larger issues like the user interface and inventory system being clunky and unnatural (I can’t think of a game that would benefit from an item wheel as much as this one), but there’s time for those to be fixed. 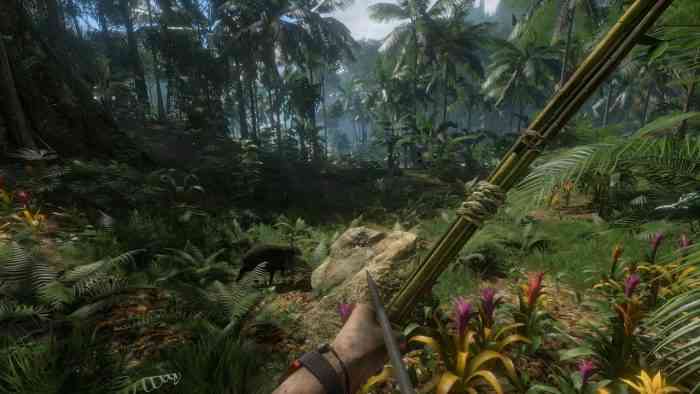 Now that the preliminary warning about the game putting the ‘Early’ in ‘Early Access’ is over, I can talk about why I want to see this game in particular take advantage of the system. Green Hell is a game about being lost in the Amazon Rainforest with your primary objective being merely to survive. This involves scavenging for food, avoiding deadly animals, healing your wounds, and even defending yourself against the aggressive native inhabitants of the forest. This kind of thing has been done before with games like The Long Dark, but I personally think that most of them miss the mark a bit in terms of making a survival experience that stays fun once you understand what’s going on. The Long Dark’s story mode doesn’t take all that long to become Walking in the Snow: The Game. Very soon after the player understands how to play, they’ve mastered the mechanics, and surviving, the game’s entire selling point, is no longer a challenge, but rather a menial task.

I’m hoping dearly that Creepy Jar takes as many steps as they can to ensure that surviving in the Amazon stays interesting, stays high-stakes, and stays fresh. Playtesting and content production are really the only ways to do that properly, and this is EXACTLY what Early Access is for. Their focus should lie not only on finishing what they’re making, but on polishing it until it shines like the brilliant shafts of light gleaming in through the game’s treetops—in case you didn’t pick up on what I’m saying there, I’m saying the game looks fantastic. These kinds of games can’t rest on strong mechanics alone; no game can. Players can pick up on mechanics pretty quickly. If the mystery of those mechanics is the only thing giving your game its luster, you’re going to see people falling off once they understand how to play. The challenge then becomes having the players use those mechanics in interesting ways. This is why design is still important for open worlds. Player experience in a game should never be left entirely up to the player. Unless you’re Minecraft.

What I’m most looking forward to in Green Hell’s full release, though, is its story. The Early Access release only has the very beginning of the story as a tutorial, and it left me itching for more. I can only hope that their writer knows what they’re doing and is making a dynamic story. Don’t try to make the story mode into survival mode with words occasionally sprinkled in. Make the story mode a story mode. It seems obvious, but there can be a lot of perceived pressure to really cram in those survival mechanics since they’re the game’s primary selling point. This doesn’t have to be the case. Those mechanics can be explored in depth in the survival mode. Give us a true story.

I’ll be honest. I don’t think this game will be ready in three months. At least, not ready to the degree that I would hope. There’s too much that needs work for a full release to come so soon. This is a really stellar premise, and the team has shown that they have the potential to do it justice, so I hope that Creepy Jar knows that staying in Early Access for a little longer is okay if it means a better game. No one will complain if you release a masterpiece, so try your best.