Activision’s Skylanders is the franchise that kickstarted the “Toys-to-Life” genre in a big way.  Just under five years ago Skylanders: Spyro’s Adventure hit consoles, and although introducing a game with figurines you purchase to play in the game was a gamble, it was a gamble that paid off.  Since that time other publishers have released games in this genre.  Disney is releasing Infinity 3.0 this fall, which is of course its third ‘kick-at-the-can’ so to speak, and Warner Bros. is set to release their new IP called LEGO Dimensions.  Skylanders, a franchise that doesn’t rely on existing IP’s to make toys, is set to launch its next game in a genre that has started to become quite crowded.  Not fearing a challenge, developer Vicarious Visions has stepped up to the plate with Skylanders Superchargers, adding a new feature to the game: land, sea and air vehicles.

This year’s entry into the world of Skylanders includes 20 new Skylanders, 8 of which are identified as “fan favourites” and have been given new weapons and upgrade trees, along with 20 vehicles.  Although the 20 vehicles are broken up into land, sea, and air, there are a wide variety of vehicles overall, from submarines, speedboats, race cars, tanks, construction vehicles, jets and helicopters to name a few.  Having such a wide selection of vehicles allows for many different forms of gameplay for fans to experience.

“Not fearing a challenge, developer Vicarious Visions has stepped up to the plate with Skylanders Superchargers, adding a new feature to the game: land, sea and air vehicles.”

I don’t want to get too much into the story at this point, but for those looking for a tidbit or two, Kaos is back once again and has created his ultimate weapon yet, the Doom Station of Ultimate Doomstruction.  During our demo we got to experience a level found early on in the game in the Cloudbreaker Mountains where we had to go talk to the “Cloud-Breather” Dragon.  The visuals are once again a highlight of the game.  Sure, it gets tiring hearing me say “a Pixar movie in motion”, but Pixar has been the standard in computer-animated movies, and this game plays like you are in one.  The improvements made in the graphic technology (Alchemy game engine) allow the dev-team to run EVERYTHING you see in the game using the in-game engine.

You can play the entire game from start to end with just the toys in the starter pack, which allows you to access ‘critical paths’ to finish what you play, as this has always been important to the developers.  All the previous Skylanders from previous games are backwards compatible too so you can use them all in Superchargers.  You can also use previous Skylanders to pilot or drive any of the vehicles.  For example, if you want, you can shoehorn one of the Skylander Giants into any vehicle for some vehicular mayhem. 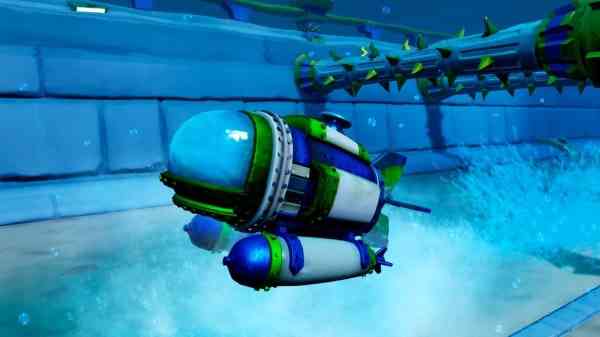 We soon discovered that vehicles are an important part of gameplay, not only in terms of the fun they provide, but what they can be used for.  This was particularly evident in the level that was being demoed.  A submarine was used to drain a flooded city.  If you didn’t have this submarine you could have kept going through the level, on a specific path, but having the vehicle allowed us to drain the city to provide a new path with new gameplay elements.  With many of the vehicles you can do other things in the game and open up new ways to get from A to B.

You can also change parts on your vehicle as you play.  These are parts that you see during a ‘Showcase Moment’ when you first put a vehicle on the portal.  At any point in the game you can swap out mods for specific parts of your vehicle that have different stats, such as durability, handling, strength, speed, etc.  You’ll find mods in mod-chests throughout the world.  If you have a vehicle and Skylander that match – a supercharged pair – you will supercharge the vehicle when using it.  This version of the vehicle is “over the top” and very unique.  You’ll deal more damage and have more health when using the vehicle during the vehicle stages.  The dev-team says this spiff carries over when on foot too.  It’s a great way to encourage people to have some matching pairs in their Superchargers collection.

“With the addition of modifiable (in-game) vehicles, new characters, and an all-new story, this fall looks to be yet another good one for the Skylanders Franchise.”

In the demo level, once you start to drive on the dragon’s back it adds a sense of scope to the level, as the dragon was flying through the air and we were driving on this massive beast.  This was even amplified more as we took to the air in another one of the vehicles.  Seeing how big the dragon was, as his body went far into the distance, just emphasised how ‘epic’ this character was.  During many of the vehicle phases, including the one when you’re driving on the dragon’s back, you can pick up gear-bits to upgrade your vehicles weapons and shields to make them more powerful.

For those worried that the game only focuses on vehicles, you have no reason to fear.  The game is about 50% vehicle and 50% on foot.  The on foot stages are classic Skylanders fare too, from platforming to solving puzzles to exploring every nook and cranny for secret areas and items.  Of course the characters look just as good as the vehicles and environments too, so that whole “animated movie…” feel still remains. 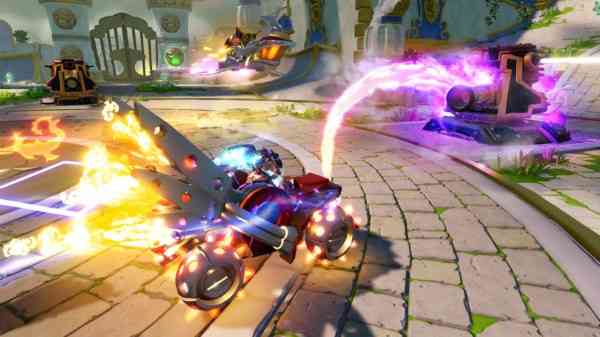 I have to admit that I have always been a fan of Skylanders, given that they started this current revolution of “Toys-to-Life” that continues to catch on, and Superchargers looks to be a game that should be just as successful as previous ones.  With the addition of modifiable (in-game) vehicles, new characters, and an all-new story, this fall looks to be yet another good one for the Skylanders Franchise.  Oh, and for you Wii U owners out there, Activision has teamed up with Nintendo for some Wii U exclusive Donkey Kong and Bowser Skylander/Amiibo figurines and vehicles.  We have a few pics in the gallery below of the Nintendo specific characters in action.