E3 2015: The Technomancer Preview – AAA Bang from a Small Studio with Huge Ambition

Every year when I hit the show floor at E3 a title comes along that surprises me. Usually it’s a game I know about but haven’t given much thought to. This year, just like always, it happened again with Spiders’ The Technomancer. Having played a few of their games over the years I was interested in seeing what they were bringing to the table but I never expected what I ended up seeing in my behind closed doors demo. This little studio, made up of approximately 40 people working on a limited budget, is making a game that looks like it may rival any AAA offering on the market. Hitting PC, Xbox One and PS4 in 2016 this is one to keep your eye on.

The Technomancer is an action RPG that takes place on Mars. If you’ve followed any of Spiders’ previous offerings you may know that this is the second game in which they’ve used the red planet as a setting. A few years back they released Mars: War Logs and while it seemed ambitious it ultimately fell a little short on its execution. It was there, however, that we were introduced to ‘technomancy’ and while The Technomancer isn’t a direct sequel it pulls from the same lore as its predecessor. This is Spiders’ chance to show what they’ve learned from past experiences and bring an amazing game to players.

“This little studio, made up of approximately 40 people working on a limited budget, is making a game that looks like it may rival any AAA offering on the market.”

Surviving on Mars is no easy task and while many humans have suffered mutations at expense of the sun’s radiation the Technomancers are genetically engineered to withstand these extremities. A side effect to these gene manipulations are the technomancy powers which see lightning springing forth from their fingertips in battle and much more. Due to these powers the Technomancers are looked down upon and treated as outsiders from the rest of the populace. They are dangerous and unwanted. From what were shown in the demo the story is based around Mars losing all contact with Earth and it’s citizens trying to scrape by while evil corporations control the most needed resource on the planet, water. You, as ‘The Carrier’, will attempt to solve the question of why Technomancers were created while also dealing with the water-miners who hold all the power.

While Mars: War Logs was all reds and greys and browns it looks like Spiders has added a much needed shot of color into The Technomancer. For an early alpha build it’s already looking gorgeous and running smoothly. The combat, which largely seems to be melee based, looks to be fluid, visceral and also challenging. Building on a four armed skill tree you can focus on your destructive technomancy powers as well as three distinct fighting styles. While adapted to the post-apocalyptic steampunk setting they can easily be compared to familiar fantasy themed styles we all know. There’s the bo staff (think Monk in Diablo 3), the mace and shield (sword and board, baby!), and the sword and pistol (all rogue, all day). Between the three distinct combat styles and the technomancy lightning fingers there’s something for everyone. 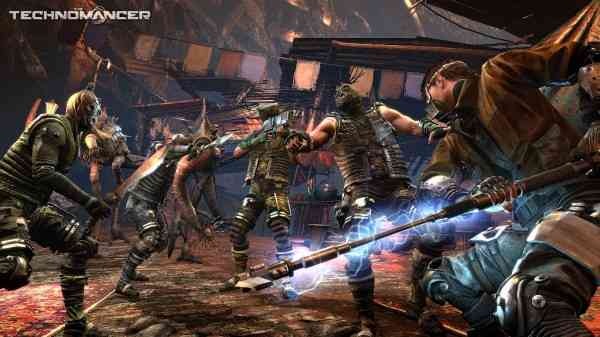 We were shown a tiny glimpse into what looks like an in-depth looting and crafting system in which you can craft weapon add-ons as well as armors for yourself and your companions. As well, the developers discussed how choices you make in the game will impact your experience moving forward. Companions could take issue with your decisions and leave and dialogue choices could positively or negatively affect relationships with others all resulting in big changes to the story and the quests available to you. Did I mention yet that Spiders is big on ambition?

At an early glance it appears that Spiders has learned from mistakes made in the past to focus on making better games for their future. While I’m not willing to scream from the mountaintops that this is going to be the game of the year when it releases in 2016, I sure as hell am ready to say it’s high up on my list of games to watch. If The Technomancer hasn’t been on your radar up to now maybe it’s time you give it a quick look.