Exclusives sell consoles. They sell consoles, they turn simple fans into fanboys and they give us a reason to gloat to our friends on the other side of the fence. Nintendo has Mario, Samus and Link. Microsoft has Master Chief and Marcus. Sony has Nathan and Kratos and now they have Aloy. All joking aside there’s no doubt that the protagonist of Guerrilla’s newest offering, Horizon Zero Dawn, will help consoles fly off the shelf (like they’ve had a problem up to now though, right?) and give Sony fans something to crow about. After a sit down with Mark Norris, Senior Producer at Guerrilla, I feel confident walking away from E3 saying that Horizon Zero Dawn was the game of the show.

The world of Horizon is set 1000 years after the collapse of civilization and as Mark put it, the setting is ‘post-post-apocalyptic’. The society we know from today has decayed and natural reclamation has taken hold. Guerrilla is excited to let us explore these places as well as dive into other locations which humans have still never seen. In the private demo I was able to truly take in the size and scope of what Horizon has to offer. Standing on a high ridge Aloy could see massive, snow-capped mountains in the distance (that draw distance though, for real), fog creeping through the lowlands with herds of machine creatures naturally roaming their environment and lush forests and greenery. If you can see it you can visit it. Mark was quick to point out that this game is fully open and quite literally everything you can see may also be explored.

Ok, so it looks pretty and it’s big. I think that was well established in the reveal but what else is there to know? I’M GLAD YOU ASKED! I got a quick glimpse into the layout of the HUD and there’s just as much here to see as there is in the game’s open world. One of the key features is that you’re able to pull up the weapon wheel on the fly, where it will slow down the action but not stop it, to quickly switch weapons in the middle of a battle. There were four slots for weapons and each weapon had an additional three slots for different ammunition types which you could switch on the fly as well. In motion it was all very fluid as our demonstrator moved between weapons with ease while taking out a herd of Grazers.

“Horizon is set 1000 years after the collapse of civilization; the society we know from today has decayed and natural reclamation has taken hold. Guerrilla is excited to let us explore these places as well as dive into other locations which humans have still never seen.”

The economy system in Horizon is primarily based on machine parts. As I saw a machine called a Watcher get taken out, Aloy recovered items such as metal scrap and flamecoils. When combined with other natural items found in the environment the machine loot can be crafted into everything from weapons to armour to traps and ammunition. Again, as displayed with the weapon wheel, I saw ammo crafted on the go without ever leaving the game while it was in motion.

An interesting part of the demo revolved around the tactics and strategy involved with combat. Aloy was able to craft explosive tripwire and, using her bow, set up a web of them in between a few boulders. By sending an explosive arrow off into the distance behind a herd of Grazers she was able to direct the herd into a stampede right into her nefarious trap. Of course it can’t all be easy and she had to dispatch with a couple of Alpha-Grazers before claiming her loot.

The magnum opus of the presentation was a fierce battle between Aloy and the massive Thunderjaw. This bastard is daunting to say the least. It stands at 80 feet tall, 33 feet wide and is comprised of 271 animations, 550000 polygons (WHAT!?), 97 plates of armour that can be targeted and destroyed to expose weak points. The Thunderjaw can hit back with 12 different attacks ranging from a gatling gun to a mouth laser, a foot stomp, a tail swipe and more. To sum it up… the Thunderjaw’s purpose is to go out there and ruin your whole day. 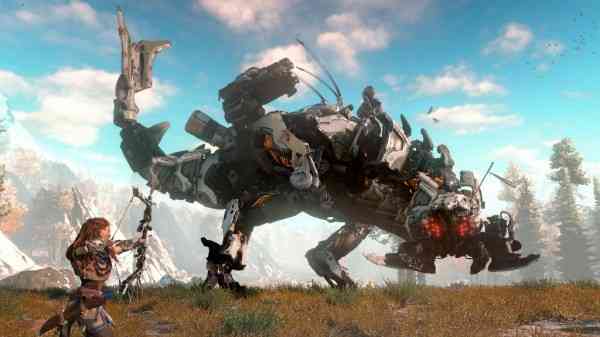 The encounter between Aloy and the Thunderjaw was a war. Fast paced and frenetic, it took a variety of tactics to bring the beast to its end. Using electric arrows, Aloy was able to briefly stun the Thunderjaw. Then, by specifically targeting them, she took out its disc launchers so it could no longer use them as an offense. As the creature weakened Aloy was able to use the ropecaster to eventually trip up and tie down the Thunderjaw whereby she could expose its central core and finish it.

This brought the demo to an end and judging from the response of my colleagues in attendance, I was not the only person impressed with what I’d seen. A very cool amalgamation of primitive humanity versus high technology is something we’ve yet to see much of in a video game. The setting is one of the most unique we’ve seen in years. The combat is tactical and needs to be approached not only with intelligence but with a little ingenuity too. Gamers have a long way to go before they see Horizon Zero Dawn hit their PS4 consoles, but I imagine you’d be hard pressed to find anyone out there who doesn’t have this one on their watch list.