Dropsy Hands-On Preview – Come On, Give the Creepy Clown a Hug

There’s a moment in Dropsy where a fat yellow bird steals the front tire of your father’s motorcycle, forcing you, and your pet dog, to chase it deep into the woodland next to some former fairgrounds. Along the way you meet a squirrel who declares its unrelenting affection and friendship to Dropsy, and a fish in a puddle sized pond who yearns to be reunited with its wayward companion. When you find the bird, who – unsurprisingly, but contrary to its anatomy – has attained a double chin from its diet of ice cream sandwiches, it has made a nest of scavenged tires. Dropsy refuses to approach the bird to retrieve his father’s wayward tire for fear of the tubby yellow avian’s apparent aggression. Dropsy is to strangeness, what David Lynch is to, well …strangeness.

Dropsy is a point and click title due out this September on PC, Mac, and Linux, all as result of its successful second attempt to achieve funding via Kickstarter. In Dropsy, you play as the titular clown, whose family is viewed with contempt by the local townspeople. Poor Dropsy’s family was responsible for a fire at their circus that killed many of those in the audience, and some of its own number. The resulting plot is a dark and strange attempt at recompense, as Dropsy is allowed to help any local townsperson who harbours any ill will towards his family.

There is also a nefarious supernatural undercurrent to the game’s locale which seems to be building up towards the game’s main quest. It includes the likes of vampire hunters, one-eyed mutants, and a dreamworld that’s undoubtedly terrifying even when it tries at being bright and fluffy. I have yet to play through a dream in the game that didn’t result in a mouth embedded in the ground latching onto me with its tongue to drag me down into its gullet. Dropsy is still a very strange game.

“Dropsy is the physical personification of why some people must fear clowns (coulrophobia would be the proper term), but I find it hard to feel anything but affection for him and his dedication to altruism.”

Yet, for all its apparent strangeness, Dropsy is also a sweet game. I never expected Dropsy, especially after its original 2013 trailer to be so kind. Being toted as a ‘hugventure’ title, your actions are meant to live up to its promise. Nearly everyone can be hugged. And Dropsy doesn’t seem to want much more from those he comes across, than genuine happiness. Dropsy is the physical personification of why some people must fear clowns (coulrophobia would be the proper term, which I only know because I looked it up after playing the original trailer in preparation for my preview). But, I find it hard to feel anything but affection for Dropsy and his dedication to altruism.

There are moments of the game – particularly in his dreamland – where you can see Dropsy dealing with his own grief. Aside from Dropsy’s father, his dog, and the player, no one in this world seems privy to the pain of their resident clown and his perpetual not-so-toothy smile. Wherever the game goes from here, in terms of its supernatural mythos and the exploration of the town’s tragic back story, I’m honestly pulling for this clown – whose makeup is undoubtedly the reason many children can’t sleep at night. 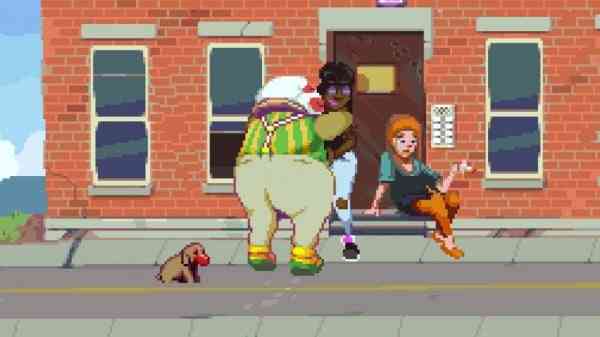 Dropsy is the brainchild of Jay Tholen, and garnered some prior notice in a 2008 ‘Choose Your Own Adventure’ thread on the Something Awful forums. The soundtrack, primarily composed by Chris Schlarb, with some tracks by Jay Tholen himself, evokes Grim Fandango much more than it does Beneath a Steel Sky or Monkey Island. But it’s the game’s colourful pixel art aesthetic combined with its dark, but strangely sweet setting that are entirely its own. It’s almost as if someone set half the cast of a grade school educational game on fire, and started from there. Eschewing the text of many point and click titles, the desires of NPCs are portrayed with pictures in speech bubbles. While this inclusion helps the game to escape typical mind numbing adventure game logic the result doesn’t make for very challenging puzzles thus far. Even so, it’s the setting and characters that drive the game, and both seem to benefit greatly from the gradual pacing that open world point and click games have to offer. On those grounds, Dropsy is clearly worth the price of admission so far and we’ll be keeping our eye on it for its final release.

Next Leap of Fate Preview – Smash TV & Doom Fans Should Hack & Slash Their Way Into This Rogue-Like
Previous WWE 2K16 Hands-On Preview – Does 2K Have the Moves to Remain King of the Ring?