Innovators don’t create trends because very rarely is an innovator credited with being one. Popularizers are the people who take the innovation and unleash it to the masses, where everyone will take inspiration and in some more desperate cases, copy it. The Matrix popularized bullet time, Aliens popularized space-marines, and the popularizer of Roguelikes is… well, actually, that’s not easy to say.

The steam market place saw Spelunky, FTL, Rogue Legacy, The Binding of Isaac, Risk of Rain and a plethora of other titles all around the same time. Leap of Fate is the latest in the early access family to enter this crowded genre. Critics are typically skeptical by default, but considering that I haven’t rated anything higher than a 7/10 for the past four months, Leap of Fate had my doubts.

I made a video for COG in which I talked about the Importance of Tutorials, and memories of bad examples I used in that video began to resurface when playing Leap of Fate. Boring cut scenes are met by equally boring challenges in even more boring levels. Video games that make a poor first impression have a hard time escaping the hole they’ve dug for themselves. This is why it impressed me that Leap of Fate absolutely does.

Once the training wheels are off, Leap of Fate becomes an addicting skill based game that is sure to have people coming back for some time. Aesthetically drawing from the urban fantasy genre, Leap of Fate does impress with its style; the mix of urban decay and mystical texts transported me instantly into the game’s world. The lame dialogue and cut-scenes aren’t offensive, but they don’t enhance the game’s presentation, what works is solely done by game itself.

“These acts of desperation, combined with the fast paced shoot-em-up gameplay, are surpassingly complimentary.”

The dark atmosphere and magic may seem unique, but in-terms of Leap of Fate’s gameplay, id Software’s masterpiece DOOM came to mind while playing. Hit-scan weapons do not exist here – from what I’ve played – Leap of Fate takes its influences from games where damage is slow, but hits like a rock. You feel a distinct pain of embarrassment every time a sphere of magic hits you, specifically because you know that you could have avoided it.

Recently playing through Hotline Miami 2 reminded me of when difficulty feels tough but fair, and when it feels like punishment due to a lack of perfected game mechanics. Leap of Fate will eat you alive, but only because you are not worthy.

Unless you are a master, your character’s powers are what you will be relying on throughout your journey. Your powers, such as a fast and hard-hitting dash can be used four times in every level, however, you are able to obtain resources that allow you to keep using powers, but at a cost. When you’re dodging enemy projectiles with a sliver of health left, you will simultaneously be making tough decisions, ones that could result in you surviving until the end or falling to the floor around the corner. 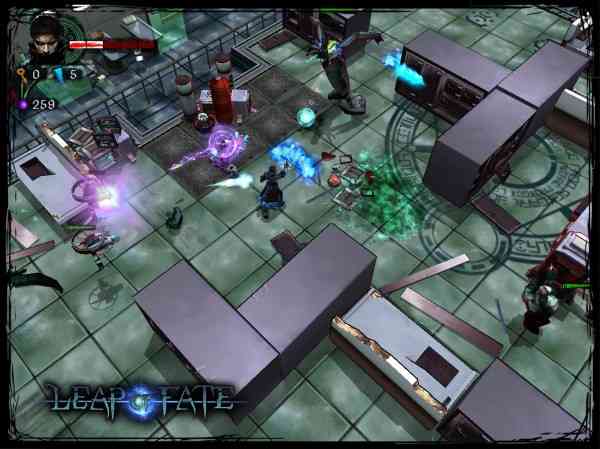 In my first venture into Leap of Fate’s randomly generated levels, I received a power that made it possible for explosive objects on the map to drop points you can spend and health boosters. It wasn’t much later when I found myself having to decide between blowing up enemies with timed explosions, or destroying everything in the stage just for one more health point.

These acts of desperation, combined with the fast paced shoot-em-up gameplay, are surpassingly complimentary. While the game may be in early access, that doesn’t mean there aren’t any criticisms, the most prevalent being the sound design. Bad is not the word to describe it, because it’s not; it’s inconsistent.

Slamming to the ground at the beginning of a stage, or the catchy score, sound great. But your powers, at least with the current character, sound weak and hollow. Like you’re shooting rolls of toilet paper rather than explosive waves of magic.

I am very jaded, unable to be excited for pretty much anything in the gaming industry, doubt is something I instinctively have when I hear a game claim to do so much. Leap of Fate deserves excitement, because it’s looking to be a fine Roguelike experience, one that will hopeful stand side by side with the popularizers that paved the way for its existence.

***An Early Access code was provided by the Publisher***