WWE 2K16 Hands-On Preview – Does 2K Have the Moves to Remain King of the Ring?

This past week, we at COG got a chance to check out, in person, the most up-to-date build of WWE 2K16 at an exclusive hands-on event in New York City.  With a bevy of WWE stars and divas in attendance, 2K Games unveiled the latest version of the popular wrestling video game series for us to try.

If you have followed the series for a few years, you know that there is a lot riding on this year’s iteration, as WWE 2K15 was met with some mixed reviews due to its scaling-back of content and customization options.  To be fair, 2K, after taking over the WWE game franchise from THQ, should be given a bit more credit. They made the bold step of trying to put their stamp on the series in 2015, by making it more of a realistic wrestling simulation.  But for many fans, the changes sacrificed some of what made the series fun.  So, the big question is, can they bounce back with WWE 2K16?  Well, I can say that, judging from my hands-on with the game, it does look like 2K has made a real effort to listen to fan feedback and make this year’s WWE 2K a better game. 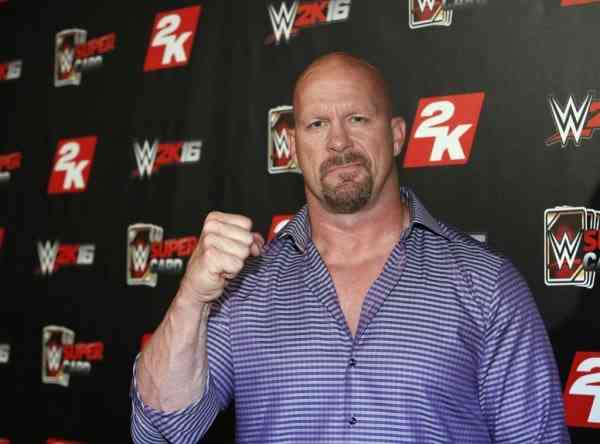 First off, the visuals in 2K16 look to be once again gorgeous, definitely in keeping with the photo-realism we saw in WWE 2K15.  Facial rendering was a huge strength in last year’s version, and WWE 2K16 shows it has lost none of the accuracy.  Likenesses were stunningly realistic in wrestlers I played.  Brock Lesnar’s flat-top hair and intimidating stare were so real, I felt like I was watching him on Pay-Per-View.  It helped that WWE 2K16 shows new improvements to sweat animation as well – Lesnar’s skin looked increasingly flushed as the match went on, and sweat on his skin seemed to be dynamic, looking just as it would in a real-life match.  Overall, with all of the detail and realism that 2K has clearly put into WWE 2K16, this year’s game looks to be the best-looking of the series so far – and keep in mind, the version I saw was not even a final product, so it may very well look even better when it releases.

“I can say that, judging from my hands-on with the game, it does look like 2K has made a real effort to listen to fan feedback and make this year’s WWE 2K a better game [than WWE2K15].”

Motion capture is spot-on, showing itself in the fluidity of movement in each wrestler.  Playing as Finn Balor in his Demon persona, I was struck by the incredibly detailed and accurate textures, as Balor’s skin didn’t just look like skin, it looked like skin covered in makeup.  That is a real testament to the level of detail that WWE 2K16 shows.  This was evident in the game’s new cloth physics system as well; 2K has promised that wrestler’s attire will move and respond realistically to in-game events, and this was definitely evident in my hands-on.

Speaking of Finn Balor, his entrance as the Demon was amazing to watch as well – it is great to see that 2K is including such an exciting new talent into this year’s roster – the series’ biggest ever.  For those who haven’t yet heard, WWE 2K16’s roster of 120 wrestlers will include, for the first time, stars from NXT, the developmental league for the WWE.  NXT has been popular with fans due to its high-quality level of wrestling, and exciting young talent.  In WWE 2K16, we finally get a chance to play our favorite NXT wrestlers in-game.  Now, this “mainstreaming” of NXT into the WWE 2K game series will undoubtedly be a welcome addition for gamers, but it might be a double-edged sword for wrestling fans.  NXT has almost developed a cult-like following amongst some wrestling fans, who take a sort of pride in its outsider status.  It remains to be seen how they will take to having their beloved NXT being added to the WWE, rather than getting its own video game altogether. 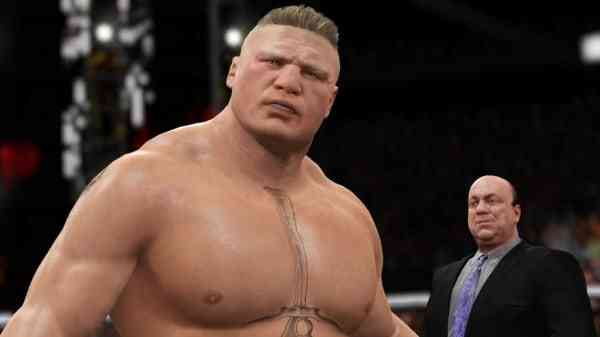 One thing associated with NXT has been the much-discussed “diva revolution” that has brought women into professional wrestling in a bigger way than ever before.  And that major, and very positive, change in the sport is now reflected in the WWE 2K game as well.  Now, amongst the other new features, you will be able to create a diva in WWE 2K16.  I’m happy to say that the suite of creation features in general has been much improved from last year – in addition to Create a Diva, there’s Create a Championship, Create an Arena, and Create a Show.  These were all cut out of last year’s game, much to the chagrin of many fans.  Plus, creation features from last year have been improved as well – most importantly, Create a Superstar and Create an Entrance have gotten some key upgrading in this year’s offering.  So, it remains to be seen, as we get to really play around with these creation features, whether 2K has done enough to win back some of last year’s critics – but the outlook is definitely positive.

“… almost every moment of a match was in my control, giving WWE 2K16 the most interactive and player-centered feel of any game in the series thus far.”

What about gameplay?  In my hands-on, I got a chance to see in action a lot of the cool new additions coming to WWE 2K16.  First off was the Dynamic Entrance feature.  With this new improvement to the flow of matches, you can take control of your superstar while they walk on, and even engage in brawls with your opponent before the official start of the match.  As 2K says in their announcement, “why wait for the bell?”  I found this to be a really nice new element to the gameplay, allowing me a lot more freedom and control of my character.  I was able to run over and confront my opponent while he was still doing his entrance, which was a lot of fun for both of us.  Plus, maybe most importantly, WWE 2K16 has gotten rid of load screens between entrances and the start of the match.  With all these improvements, I found almost every moment of a match was in my control, giving WWE 2K16 the most interactive and player-centered feel of any game in the series thus far.

Another thing I got to try was the new Reversal System.  Present in the last WWE game, the reversal has been tweaked and improved to allow for more strategy.  You now have a limited number of reversals that recharge over time, so you have to wait for your “perfect moment” to try one, or risk wasting it.  This might be 2K’s attempt to address the fact that reversals in 2K15 were almost too easy to do with practice, and many players learned the game’s timing to reverse almost everything, kind of like an exploit.  In addition to the limitations, there are now Minor and Major Reversals, which add a risk/reward dynamic to the gameplay.  Major reversals are harder to pull off, but if you get them right, they weaken your opponent much more than a successful Minor reversal would.

I found that I went for the Major reversal most of the time, but I failed at it almost always as well.  Just like in 2K15, you have a tiny little window of time to pull it off with the R2 button; if you are even slightly too quick or too slow, it doesn’t work.  I did like the added complexity in this year’s version, though.  I definitely feel that, when the full version arrives, the new Reversal system will be one that players will get rewarded for practising and perfecting with trial and error.  This new 2-tiered difficulty option is a potential momentum-swinger in matches if you can really learn its nuances.  And this, coupled with the fact that you need to recharge and you have a limited number, means that maybe this year’s iteration will see a more balanced use of reversals in matches. 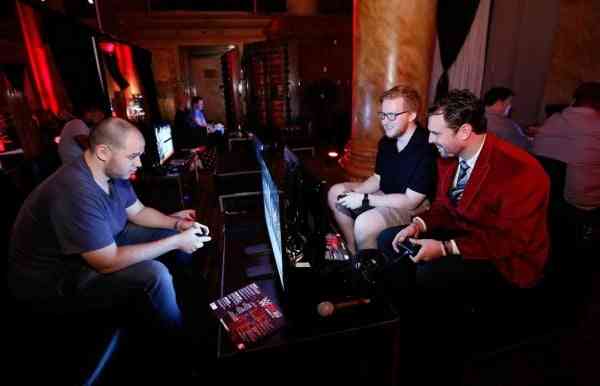 Overall, I found that gameplay was very smooth and probably a slight improvement over last year.  2K has made a great effort to upgrade the animations on the wrestlers, with apparently “several thousand” new animations added, and it definitely showed in my play-through. Gameplay has been enhanced with lots of new options as well, such as the ability to cancel pins, which I used a few times when I accidentally pinned an opponent before I had adequately worn them down.  And lots of other little things, such as the addition of John “Bradshaw” Layfield on commentary, joining Michael Cole and Jerry Lawlor, gave WWE 2K16 a heightened sense of realism over previous entries.

“… whether WWE 2K16 ends up to be the improvement that we have been waiting for or not, 2K is showing that they are at least paying attention to their fans, and that is always a good thing.”

As for the Showcase mode of WWE 2K16, much has been made of 2K’s choice of Stone Cold Steve Austin as the cover star.  While some might legitimately question the focus on a star who hasn’t even wrestled since 2003, playing through the career highlights of one of wrestling’s most iconic superstars will surely be a blast.  I didn’t get too far, but I did get to try out Austin’s classic King of the Ring showdown with Jake “The Snake” Roberts from 1996.  Reliving this iconic wrestling moment in The Texas Rattlesnake’s storied career made me let out a “Hell Yeah!” just like the good old days.  I have a feeling that many of those who criticized the cover choice will be won over once they get into WWE 2K16’s Showcase.  It’s always been an excellent part of the series but this year it looks particularly awesome.

Overall, there are a lot of changes and additions to WWE 2K16 that make this year’s entry very different from its predecessor.  Of those that I was able to check out in this hands-on – especially in visuals and gameplay – I can confirm that I generally liked what I saw.  Other aspects, such as improved online gameplay and matchmaking, I was not able to see in action, so it remains to be seen just how much better they will be this year.  One thing is for certain: whether WWE 2K16 ends up to be the improvement that we have been waiting for or not, 2K is showing that they are at least paying attention to their fans, and that is always a good thing.

WWE 2K16 comes out October 27th, 2015 on Xbox One, PS4, and PC.  Stay tuned right here for our review of the game for a more detailed look at the strengths and weaknesses of the final product.