The Cycle is Not Quite the Game You Were Expecting

Much of the marketing for The Cycle makes it abundantly clear they don’t want people to think it’s just another battle royale trying to latch onto a fading trend. After playing an early access version for a number of hours, I’m both pleased and a bit surprised to say they are right on the money. The Cycle doesn’t feel like a battle royale at all. Sure, it shares a few similar traits to one, such as an impending death storm and a group of players being dropped into a shared map, but the comparisons pretty much end there. Instead, The Cycle is more like a combination of the PvE quests found in a game like Destiny or Borderlands and the sci-fi PvP action of Halo or Titanfall. The formula still has some kinks, but what developer Yager has created so far is promising and rather addictive.

Yager is dubbing The Cycle as a “competitive quest shooter” or a “PvEvP,” and those descriptions fit pretty well. Essentially, about 20 players are dropped onto the world of Fortuna III, a lush and hostile place filled with precious resources and horrible creatures. The Cycle incorporates a semi-cartoonish graphical style that has become synonymous with Epic Games (think Fortnite and Dauntless) and uses it just as effectively here. You fill the role of a futuristic miner, sent to Fortuna III by one of three factions to complete contracts and escape from the planet alive. These contracts range from killing specific monsters, to collecting special mushrooms, to mining for crystals, and more. The main thing to note here is there is no immediate objective to kill or hunt other players. If you want, you can avoid them entirely for the duration of the match and still win if you finish the most contracts and don’t die in the process. That being said, there is a strong incentive to seek out other players, just not for the reason you might expect.

If you are playing a game of solos, you can complete the contracts on your own as I mentioned previously, but you also have the ability to form a pact with another prospector. This is typically very beneficial for both players as it strengthens your defense against other enemies and makes completing contracts a breeze. In almost all the matches I played, there was rarely a lone wolf player by the end. This system adds a tense dynamic to each PvP encounter because you have to decide if it would be more valuable to attempt a team-up or just kill them and take their loot. As far as the PvP itself goes, the gunfights are frantic and exciting. The guns are satisfyingly sci-fi feeling and combined with a jetpack and numerous abilities to choose from, engaging other players always plays out differently each time.

Things get a little more tedious, though, when it comes to completing contracts and upgrading your arsenal. With the contracts, there simply aren’t enough in the game at this point and repeating the same quests over and over again gets tiresome after a while. Hopefully, once the finished game goes live there will be even more variety, but right now it’s a tad sparse. The loot system is good in design and is somewhat reminiscent of how leveling in a MOBA works, it’s just too slow going. Every player lands with a single sidearm weapon and has to kill PvE enemies or complete quests to earn currency, which they can then spend on various weapons and abilities from a pre-made loadout created in a character customization menu outside of the match. Each of the items has their own cost, so you have to be smart about how you spend your money. You could, for instance, save up and buy a strong weapon as soon as possible, but then you won’t have abilities or a vehicle for a significant portion of the game. Weighing these choices is just the right kind of stressful and rewards careful planning on the player’s part.

What’s not so great about the system, though, is how long it takes to actually earn the currency. The matches are 20 minutes long, and often times I didn’t feel like I was able to buy a weapon or ability I wanted until about a quarter of the way through. Since finishing a quest doesn’t award very much currency, the system incentivizes running around and killing as many grunts as possible to earn currency in the early game instead of working toward the game’s objectives. The simple fix for this would be granting larger rewards for completing meaningful tasks, but a more general decrease in the cost of weapons and abilities would also reduce the need for grinding allowing you to get to the good stuff faster. 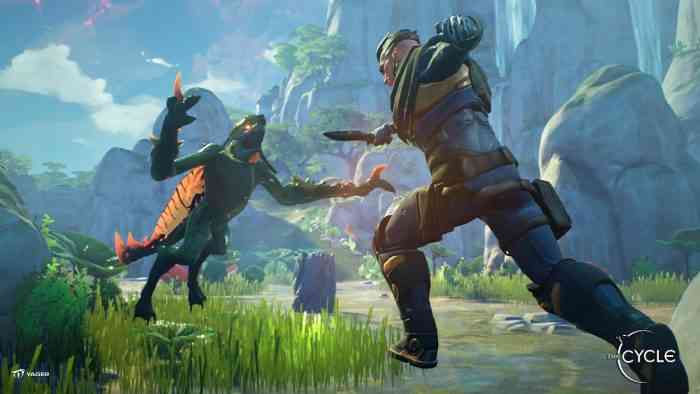 Finishing a match nets you experience points for your chosen faction as well as crafting materials, both of which unlock new weapons and abilities you can then equip to your character in the loadout menu. This establishes a nice sense of progression and it’s always gratifying to unlock a new weapon, trick it out with upgraded parts and then hop into a match to test out its power. There is some concern with new players always feeling outmatched by veterans with better gear, but it doesn’t take long to level up enough to acquire most of what you’ll need and even the base level gear isn’t useless. The other good news is there doesn’t appear to be an option to use real money to buy loot boxes or upgrade your arsenal, which is always a good sign in our world of increasingly popular games-as-a-live-service business model.

The Cycle is definitely not a battle royale, but it’s not entirely original either. It takes ideas from a lot of genres and mixes them into a surprisingly successful concoction. For a game in early access, it shows a lot of potential and rarely feels janky or unpolished. There is some smart decision making when it comes to the PvP elements and crafting and most of the issues I have are easily fixable. If you enjoy the core gameplay loop of games like Borderlands and Destiny but want the fast-paced simplicity of an online matchmaking experience, The Cycle is very much worth exploring.

*** An early access code was provided by the publisher ***

Next Trine 4: The Nightmare Prince Returns 2.5D to Trine
Previous All The Right Moves in Gears 5 Horde