I’ve already ranted about the aesthetic, but good lord the aesthetic of this game. Future-focused pixel art is an easy sell for me, and Cyber Shadow makes it a much easier one. Every section of every stage would make for excellent wallpaper art. The bosses are massive mechanical constructs, replete with glowing cores and bladed limbs. The weapons belch out burning gobs of plasma and fire. Even the checkpoint stations are bastions of puked up cybernetic power. This is all to say nothing of the excellent combat. 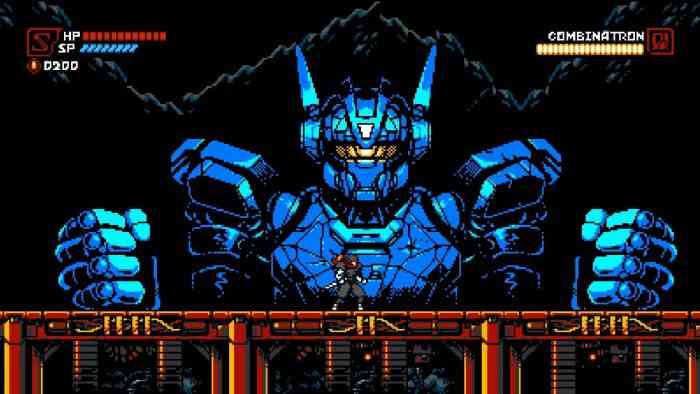 Even though my abilities for the demo were limited, I was still a highly mobile murder machine. Things like wall jumping and dashing will come later. In the beginning, you’re simply a jumping, slashing engine of suffering. Each move feels precise and punchy, groaning with the weight of your power. The special moves you unlock are a handy afterthought, the icing on the cake, so to speak. I definitely fell to my death waiting for a wall jump once or twice, but hot damn this game feels good.

Damn It Feels Good To Be A Ninja

Don’t think I’ve forgotten about the music and the sound effects. They suck you into the world with remarkable ease. This is a different brand of immersion. Instead of feeling like you’re really there, you’re plugged into every NES memory you’ve ever accumulated. The cyborg bleeps and crackles add proper heft to all your movements, attacks, and untimely deaths.

There were two stages, and two bosses, for me to cut my teeth against during the demo. After a few fatal setbacks, I was able to win the day. This brought up another high point, the checkpoint system. Unlike the games of old, we’re not hampered by the lives system anymore. To be fair, this hasn’t been a problem for ages. But hoo boy, does playing Cyber Shadow drudge up some nasty Ninja Gaiden memories. Mostly of getting almost to the end before your lack of lives cuts your legs out from under you. Still, in that way and so many others, Cyber Shadow is a fantastic evolution of a classic formula that I can’t wait to see more of when the game is eventually released.