If you have played any digital collectible card game in recent memory, most of them are sure to have felt similar, with a couple exceptions. Valve’s latest title, Artifact, brings the intellectual property of DOTA 2 to the digital card game arena in a big way. Though developed and published by Valve Corporation, the game was primarily designed by Magic: The Gathering creator Richard Garfield. In bringing such a flexible IP to the digital collectible card game genre, the potential for the game was limitless, and the team has shown their savviness in doing so.

Artifact takes place over three playing fields that are reminiscent of the three lanes in source material DOTA 2. The primary objective in defeating your opponent in Artifact is to either destroy two of their towers or a tower and their “Ancient”, which falls in behind a tower when destroyed. With a flexible goal, player strategies can differ from game to game depending on their strategy or the flow of the match.

While the towers and “Ancient” undoubtedly play a huge role in both the universe and the game, the focal point of the game definitely falls on the heroes. Coming from DOTA 2, the heroes will garner favor from fans of the series, but ultimately play the biggest role in the game as the primary units. Depending on which color theme the heroes fall into (red, green, black, and blue), players are only able to play cards with the corresponding colors in lanes that the heroes occupy. Doing so adds another layer of strategy that can affect player choices of where to place heroes and how to utilize them.

Surrounding the bases of the game (three lanes and the heroes) is the overall structure of the gameplay. Instead of the usual “Player A’s turn, Player B’s turn, rinse and repeat”, players take turns making moves until they both pass, at which point the heroes and creeps engage in combat. The moves may consist of summoning creeps, equipping items, casting abilities, etc. After all three boards have been completed, players are taken to a “Shopping Phase” in which they can spend the gold earned from killing creeps and heroes. While the process may seem long when reading about it, I can assure you that the gameplay loop is speedy, intuitive, and engaging. 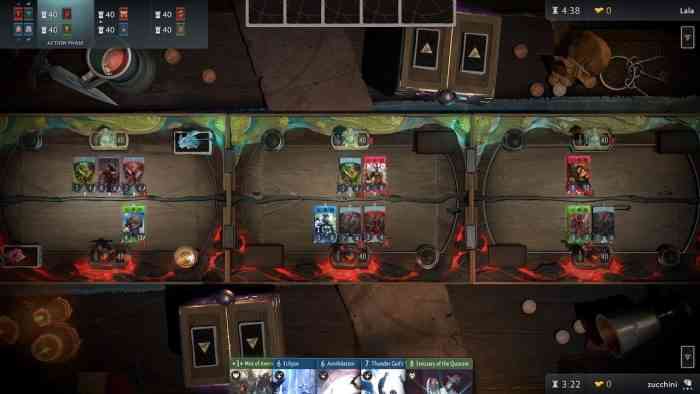 In my hands-on demo with the game, I found Artifact to be easy to pick up and play as someone with relatively little experience with digital collectible card games and even less with DOTA 2. The basics of the game were easy to comprehend, and the other nuances were picked up easily within the first match. By the end of the match, I had been pleasantly surprised by permanent buffs, understood the general gameplay loop, and enjoyed the overall flow of matches. With the popularity of DOTA 2, I can only imagine the size and scope of Artifact when it finally launches.

Artifact will be releasing for $19.99 USD on November 28, 2018, with two starter decks and 10 card packs. The cost of the game is equivalent to the 10 card packs and is reasonably priced. In addition, the game features Steam Marketplace integration for buying, selling, and trading cards much like players would do in a real-life trading card game. Though players may worry about card prices, the marketplace will be monitored to ensure that the marketplace does not get out of hand. With the release coming so close, we cannot wait to get our hands on the beta as well as the actual release of the game.


Marci of Dota: Dragon’s Blood Is Set To Join The Fight This Fall