I thank my lucky stars that CRPGs are back in a big way. I cut my gaming teeth on the original Fallout games and Neverwinter Nights. These top-down adventures often excelled at creative problem-solving in ways other genres could only dream of.

Now that there are tons of CRPGs being published every year, there’s a lot more room for experimentation. There is also room for derivative and even mediocre work. Encased represents all of that. It’s a fun, passionate, messy little game, and I’m glad it exists.

More than anything else, Encased is doing a riff on the original Fallout. It’s a dialogue-heavy affair, and the game brags about all the non-violent solutions you can find to problems. This brag isn’t out of turn, there are a lot of dialogue avenues to explore, and weaseling your way out of a fight is pretty satisfying. The game has you make an original character and the emphasis is on roleplaying- you are supposed to get lost in this character and their perspective. Solid design ethos for an RPG. 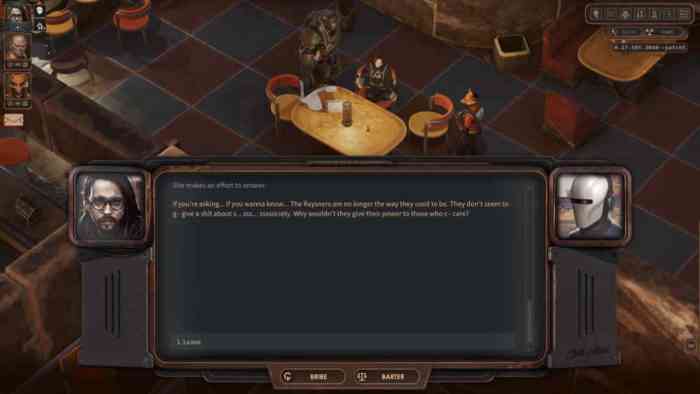 For that to land, the world has to feel like a real place. You’re not going to be able to pretend you are in a faction without understanding what they are about and how they relate to all the other factions. Fortunately, Encased has a strong vision for its world. Perhaps more dubiously, that world is extremely derivative of other science fiction.

The world of Encased is an alternate history story. During the cold war, a big weird dome formed, mutating the world within. Now a shady corporation sends in cool special agents (that’s you!) to study anomalies and collect artifacts. Superficially, I’m sure you’re seeing the resemblance to Stephen King’s Under the Dome but actually, this game feels like fan fiction for S.T.A.L.K.E.R. The big difference is the presence of the slick corporation.

This is where the quality of the writing in Encased starts to lose me. It’s clear that the writers know that the corporation is bad, and that this world is a dystopia. But so far, I’m not all that convinced they have anything to say about all that. You get the feeling that maybe this is all supposed to be satire, but you don’t really get a sense of what they are trying to say. One of the strongest elements of the game is the retro-future 70s aesthetic, but that’s all it is, a style. In Fallout and S.T.A.L.K.E.R., you get a clear idea of the games’ worldviews. Not so much in Encased, which throws a lot of ideas at you, hoping a few of them will stick. 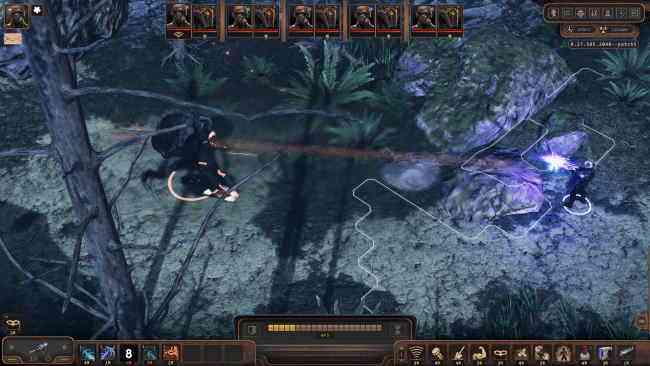 The strongest piece of this worldbuilding comes with the color-coded divisions of the evil corporation. These act as both your class and your faction. Black is for cool spec-ops warrior types. White is a bunch of mad scientists. Oranges are indentured criminals forced into manual labor. Not only is this do a solid job at implying the world to you, it also immediately gives you a role to play. The game drives you to show loyalty to your faction, and skepticism to the others. It also implies your build and what sorts of weapons you should use, things like that.

Because you will probably end up using weapons. Combat was the major area I found the weakest in Encased. Fights are turn-based and played out on tiles. There are lots of options, but they never really gel together to form a unique game. A lot of fights are just about looking for optimal positioning in order to raise your accuracy percentage. If there was a more interesting economy of action points or maybe a sophisticated cover system, I could see this combat system feeling at least as good as the recent Shadowrun games. As it stands, combat is serviceable but never thrilling. I’ll stick to the much more robust dialogue system, thanks.

Over at RockPaperShotgun, Alec Meer once coined the term “a good 7/10 game.” He was mostly talking about action games, but the principle applies across genres. A good 7/10 is never deeply original, but it’s never a disaster. It’s totally playable, and does many things pretty well. Not as well as the classic of the genre, but well enough that if you are a fan, you’ll be happy to have something new to play. Encased is still in early access, so I’m not giving it a score, but it’s shaping up to be a solid 7/10, at least in spirit. 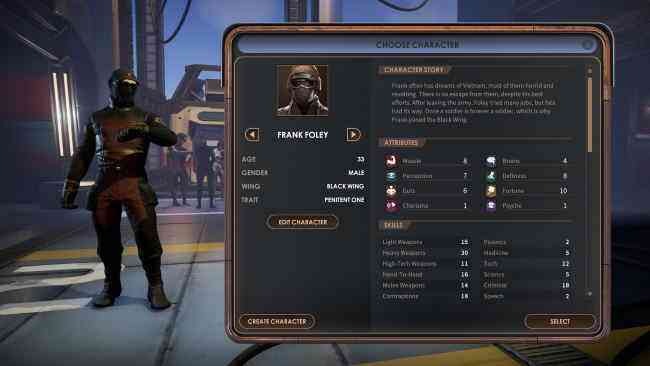 The story, writing, and characters in Encased are all pretty engaging. The combat is fine. The dialogue trees are somewhat clever. It’s all good! It’s fine! It’s fine. The thing is, I really like CRPGs, and I’m always looking for a new one to play. Well, now I’ve got a new one. Encased adequately riffs on some genuine classics, and that’s more than a lot of games can say.

*** Preview Code provided by the publisher ***

Risk System Review – Innovative Shmup for Those Tired of the Same Old
Next King’s Bounty II Has Some Delicious Meat On Those Old Bones
Previous Shadowverse: Champion’s Battle is Super Cheesy Fun