2084 Is an Unsettling Cyberpunk Shooter Brimming with Potential

In only three days, a tiny team from Poland put together a cyberpunk shooter called 2084: an unsettling, dystopian FPS where the player must kill zombies and hack devices to stay alive and escape. The game was released into Early Access on Steam on December 13, and while I was excited and intrigued over the concept of 2084, I found that the gameplay in its current state didn’t quite deliver much replay value.

The short campaign places you in the middle of a creepy indoor labyrinth set in some sort of futuristic facility, deserted by all except for a horde of hostile cyber-zombies. The idea is to make your way through different doors and corridors by hacking devices — a mechanic no simpler than targeting a device and quickly pressing the corresponding directional keys when prompted. Devices can be hacked either for health, ammo or to unlock doors and different parts of the puzzle. Along the way, you get shreds of narrative information by reading graffiti on the walls or coming across notes, but these are pretty scarce and do little to tell you what’s actually going on.

The ambience is certainly spooky, and I had my share of jump-scares playing this alone in the dark. Not only do the existing zombies like to creep up on you from behind the many tight corners and hallways, but they can also be generated from different electricity sources triggered by the devices you hack, meaning a cluster of zombies can appear right in front of you when you least expect it. The levels are claustrophobic, and the game seems to touch the line of horror without actually crossing into it. 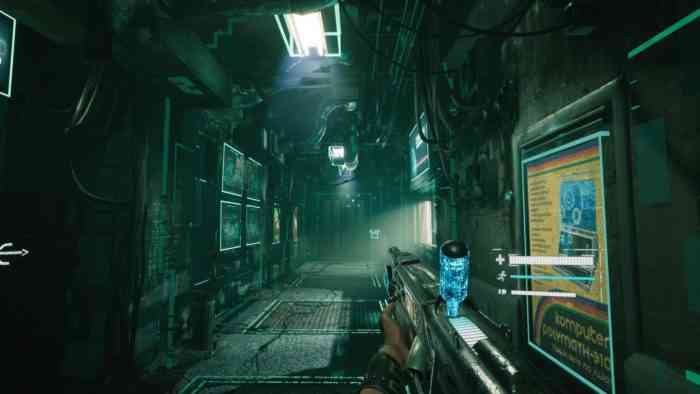 The game’s Endless Mode is where the real draw is, and I see a lot of potential for this feature. In Endless Mode, you simply run around a room surviving for as long as you can while zombies charge towards you. Mixed in with the regular enemies are zombies with TV screens for heads, and these screens can be hacked quickly for ammo to keep you going. I found that while this mode was extremely challenging, the concept’s simplicity did little to keep me coming back for more. I gave it a few tries, but don’t find myself thirsty for more. I need a little more variation than just running around a small, rectangular room, but there is a ton of space for potential here if the developers choose to add a multiplayer mode or get more creative with the map design. A co-op mode could certainly add a layer of stimulation to the otherwise repetitive gameplay, should they decide to implement this.

Along the same lines of low replay value, I do not find myself dying to pick up the campaign again anytime soon. Keeping an open mind, as the game is only in Early Access, I am hoping that more mechanics will be explored beyond device hacking. The combat consists only of hip-firing and launching grenades, with no melee commands or options to swap out your gun at any point. There is nothing to do other than shoot zombies and hack devices, but I continuously asked myself during gameplay how many more devices I’d be willing to hack in the same, redundant fashion before I would finally be ready to turn the game off. Truth be told, I got sick of it pretty quickly, but it’s still possible that new combat and shooting abilities will be added in upon full release.

In my many hours with 2084, I can say that while neither the story mode nor the Endless Mode gives enough variation or creativity to have me coming back for more of the Early Access version, I am eager to see what becomes of the game upon its full release. Should the developers choose to expand 2084 greatly, its cyberpunk setting and core mechanics could make for a very interesting and exciting shooter. Unfortunately, in its current state it is a bit too bare-bones and repetitive to merit another playthrough.

Ready or Not’s Latest Update Introduces A Lot of Fixes And More
Next Breach is an Eclectic ARPG with Killer Gameplay and Lore
Previous Thea 2: The Shattering Isn’t Shattering Any Expectations Yet