You know the Rad Scorpion? Well how about a giant wasp to up the scary factor a few notches? Yup, the Rad Wasp looks like a giant wasp or bee, with a bunch of hives growing out of its back. And sorry, the hives appear to contain swarms of smaller bees or wasps, not delicious honey. The trailer shows it running on the ground, but it’s not yet known if it can also fly. Even if it’s limited to running, this looks to be one nightmare-inducing critter. 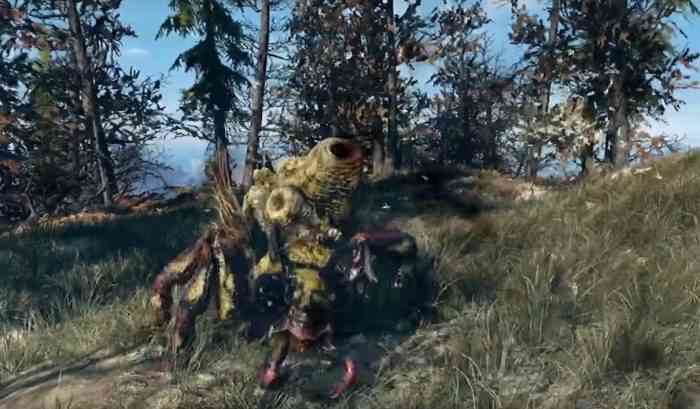 And then there’s the Mothman. The Mothman is a creature from recent West Virginia folklore that became somewhat well-known with the release of the film The Mothman Prophecies. The Mothman is one mysterious dude, with a tendency to stalk players, especially if they “stray too far” into the wilderness. They fly but they have been known to land often, and their piercing red eyes will surely strike fear into the hardest of irradiated hearts. But word in the Wasteland is that they are actually not always scary – in fact, they’ve even been known to just land near people and hang with them without attacking. That might be a relief for some, but not for us – the fact that they can be randomly chill just makes them more creepy if you ask us.

These are the Top 10 scariest creatures you’ll encounter when Fallout 76 launches on November 14th, 2018 on PC, Xbox One and PS4. Have you been playing Fallout 76? Well then, make sure to comment below on the monsters you’ve met so far that made you soil yourself in fear! And don’t forget to check out our guide to how mods, VATS and questing work in Fallout 76.