The 10 Worst Video Game Movies Ever Made

Bottom of the DK Barrell

Where were you on May 28th, 1993? For some, it was just another ordinary day. But for video gamers around the world, they were in for something truly special — or at least they thought they were. That day marked the launch of the Super Mario Bros. movie, a live adaptation of Nintendo’s mainstream mascot and, at the time, his slightly lesser known brother. It was also the very first video game movie to ever be released. It was a magnificent disaster and remains one of the strangest and dumbest movies you can watch. I’d like to tell you that future video game movies learned from this mistake and have since pushed out masterpiece after masterpiece but that would be a harsh lie. Since then, there have been a total of 33 video game movies released in North America, and they all range from bad to infamously bad.

So which video game movies should you avoid? Your mileage may vary, but to be safe, pretty much all of them. Below is a list of the ten worst of the worst. 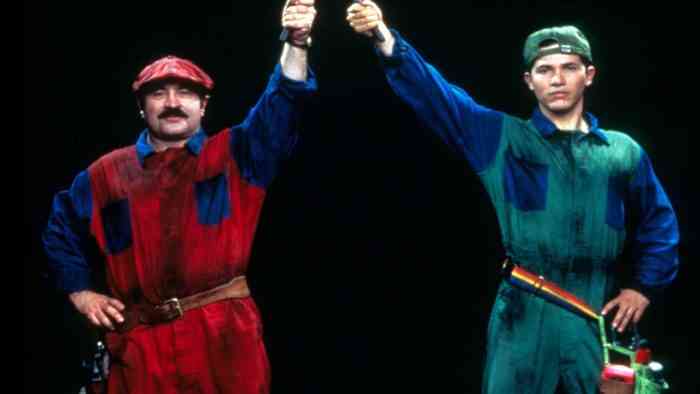 With Dwayne “The Rock” Johnson and Karl Urban in the leading roles, DOOM could’ve been a solid action movie romp but instead, it’s a heaping mess of inconsistencies, horror cliches, and bad, bad dialogue. For what it’s worth, DOOM actually embraces the fact that it’s based off of the classic original shooter. In fact, its only saving grace is a surprisingly cool five-minute first-person sequence towards the end of the film that will have fans of the game grinning from ear to ear. But there’s no need to trudge through all of the garbage to get the good stuff. You can simply check out the scene on YouTube if you’re honestly intrigued. Other than that, DOOM is a complete waste of time.

I actually like the cast in Need for Speed. Having just wrapped up his fantastic gig as Jesse Pinkman in AMC’s Breaking Bad, actor Aaron Paul’s next role is undeniably a big letdown. Despite getting the staring role, Paul doesn’t really get much to do here. Other well-known actors show up too like Rami Malek, Dominic Cooper, and Michael Keaton whom all lend decent appearances in an otherwise slow, dry, and boring script. You’d think a movie with the name ‘Need for Speed’ would be all about fast-paced car action, and while there a handful of entertaining car chases, they’re not memorable enough to elevate the film above sheer mediocrity. Also, did it need to be over two hours long?

The one that started it all. While the Super Mario video games in the 80’s and 90’s were renowned successes (and still remain some of the finest games ever created) the Super Mario Bros. movie took everything you loved about playing it and threw it down a dirty drain pipe. There’s barely anything here that resembles the games. Where’s Luigi’s moustache? Why is toad some freakishly large creature with a small head? While Bob Hoskins and Dennis Hopper were big gets at the time, they’ve been widely critical of the movie in later interviews. Hoskins has even called it the worst job he’s ever done. So yeah, it’s bad but it has weirdly earned a sort of cult status over the past 20 years. Watch with caution, or just keep playing Super Mario Odyssey.

House of the Dead

When it comes to the world of video game movie adaptations, one name is usually always brought up, and never in a good light. That name is Uwe Boll, a now-retired filmmaker (thank God!) who built his career creating low-budget video game movies. And while all of his movies are inherently bad, it’s 2003’s House of the Dead that really pushes the badness envelope. With nonsensical characters, horrid acting, and a plethora of unintentional laughs, House of the Dead is actually worse than you can imagine.  Made with only a $12 million budget, the movie scraped by with a total box office gross of $13.8 million. It also takes the cake by having a 3% approval rating on Rotten Tomatoes. This wouldn’t be the first time Mr. Boll graced us with his terrible filmmaking expertise. Nope, not by a longshot.

In the grand scheme of video game movies, the original 1995 Mortal Kombat is one of the “good” ones. So it’s a downright shame that its follow-up, Mortal Kombat: Annihilation, is nothing more than a giant heap of trash. Everything about it reeks from its incoherent plot, an almost entirely different and worse cast from the original, and unintentionally bad staging. It has somehow gained a cult following from fans that enjoy punishing themselves, but even series creator Ed Boon has called Annihilation the “worst moment” in the history of the franchise. Yeah, I’d agree with that too.

Everything’s Good | Press X To Podcast, Episode 5.10
Next Things We Love (And Hate) About the Call of Duty: Black Ops 4 Beta
Previous The 3 Best and Worst Games From July 2018