Custer’s Revenge: Legendary for All the Wrong Reasons

The year was 1982. Atari was firmly ensconced at the top of the home video game industry, with its 2600 console occupying an unchallenged position in millions of households, and families everywhere enjoyed the flashy colors and blocky graphics of such hits as Space Invaders in the comfort of their living rooms.

Into this fun and innocent cultural moment, a truly hideous, offensive and pointless little game walked in, squatted down like an unruly Tim Horton’s customer and proceeded to dump a big pile of video game crap on the floor – and the resulting stain is something that the industry will never quite get out, no matter how much virtual bleach is poured on it.

Custer’s Revenge, released by porn-movie company Mystique, has since become legend in the industry for all the wrong reasons. In it, you play the role of General Custer, real-life loser at Little Bighorn, as he ambles his naked body towards a tied-up Native American woman. Dodging arrows, Custer must reach the other end of the screen and rape her. Often cited as one of the worst video games ever made, Custer’s Revenge achieved the dubious distinction of combining ugly racism with hateful misogyny in one vile little package.

Sold as an “Adult” video game in a sealed cartridge, Custer’s Revenge was obviously a shockingly inappropriate idea for a system that was nearly-exclusively used by children. But there’s the rub – the cartridge game seemed to be purposely marketed to capitalize on intentional controversy in the most cynical of ways. Mystique’s management courted attention wherever possible, offering previews to members of the public, knowing full well that horrified reactions and vocal condemnations would sell far more product than any traditional advertising ever could. Unfortunately, they were right – the predictable protests ensued, and the game sold well as a result.

Mystique made sure to add fuel to the Custer’s Revenge dumpster-fire by periodically defending their “game,” for example by saying that it was not about rape but rather consensual sex. But the obvious facts of the word “revenge” in the title, and the fact that the woman is tied up, make these defenses so ridiculous that they merely served to further highlight the makers’ cultural ignorance. Also, the fact that you play the role of Custer, who is white, getting “revenge” on a Native American, laid bare this awful rape-fantasy’s racial overtones.

As if all of this wasn’t bad enough, Custer’s Revenge was also just a horrible game to play.  It had the laziest gameplay imaginable, with your guiding of Custer across the desert to commit coitus really the only thing to do. For $49.99 (a lot of money in 1982), Mystique tricked you by promising you the basest of pornographic exploitation, then gave you what even by Atari 2600 standards was a bottle of video game snake-oil. If you were one of the 80,000 or so poor suckers who shelled out for this one, the stench of shame undoubtedly lingers to this day. 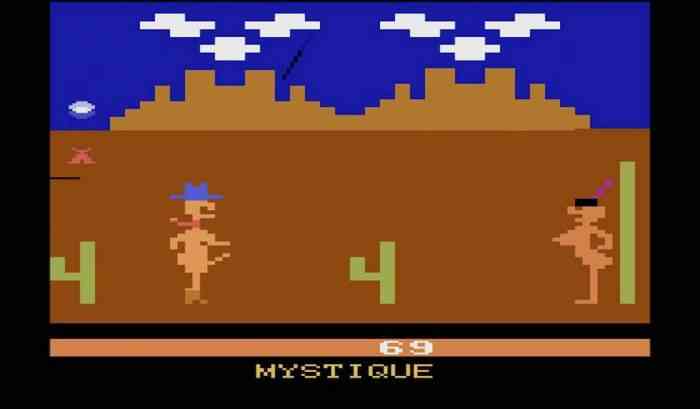 Eventually, the outcry grew to be too strong, and Custer’s Revenge was pulled from store shelves. Despite its absence, the legacy of the game still resonates as an example of the depths to which some game makers will sink in order to make a buck. There have even been attempts to bring the game back over the years – but they have remained in the shadows of obscurity due to fresh criticism. Nevertheless, the curious can still see footage on YouTube in the form of gameplay videos that garner millions of views even now.

Gaming, like any maturing industry, has had many questionable moments, including periodic accusations of sexism and racism to this day. But Custer’s Revenge was one of the earliest and definitely among the lowest. As the industry begins to gain more and more respect as an artistic medium on par with movies or literature, Mystique’s putrid, bigoted little porn-sploitation con-job is a vivid reminder of just how far we have come.

What are your thoughts – did you buy Custer’s Revenge back in the day? Are there other games that are just so offensive they deserve to be pulled from shelves? Let us know below!