Marvel, ever heard of it? It’s a company; it publishes comics. Oh yeah, and it dominates the movie industry and, some are hoping, the video game industry as well. There’s a new Avengers game coming out, and with it a new tie-in comic setting up these particular iterations of the familiar Avengers from the movie, beginning with “Marvel’s Avengers: Iron Man” by Jim Zub and Paco Diaz. Is this comic worth your time?

Well to start, these versions of the heroes are very familiar. Marvel, of course, exists in a multiverse, meaning there are infinite iterations of Iron Man, Captain America, Hulk, Thor, and Black Widow. These versions are clearly very inspired by their movie counterparts, with imperceptible differences. For all intents and purposes, they are the same, just not. Right off the bat, that’s a barrier to enjoying the story. I’m already invested in the movie version of these characters (the heroes of Earth-199999) and I love the comic versions (Earth-616 of course). I also love the cartoon universes of Earth-8096 and Earth-92131. For me to truly commit to another Tony Stark, I need something. A hook.

Don’t Mess With The Zub

Well, comics scribe Jim Zub tries his best. I’m a big fan of Jim Zub, who is no stranger to the Avengers having written the fabulous “Avengers: No Surrender.” (He’s also written a ton of good D&D comics, you should check ’em out!) Zub makes sure these Avengers aren’t bland. He makes sure to fit in a ton of fun character beats so as to prevent monotony from sinking in. That’s because the story isn’t really allowed to do much, lest it ruin a plot point that the game might want to use in the future.

Unfortunately, those character beats are pretty much exactly what you would assume. Tony Stark is smart, but unbearably arrogant. Captain America is a real straight shooter and the guy who has to make the tough calls. Black Widow’s sense of humor is Gobi-Desert-dry, and she’s got no patience for all the BS. You know the team. They’re fighting a team of villains after a thingie, but they may be tied to Nick Fury, who is supposed to be a good guy and … you get it. It’s a holding pattern story. It may set up the events from the game trailer (the Avengers exploding on the Golden Gate bridge) but not terribly clearly. 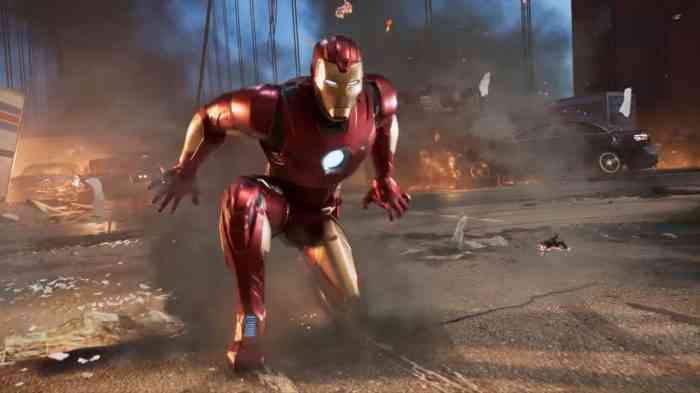 Zub is joined on art by Paco Diaz. I wouldn’t go so far as to call Diaz’s work “house style,” but it definitely looks like a lot of books Marvel was putting out in the early 2000s, around the time “Ultimates” was being published. That means a realistic style with a high tech modern sheen. Military tech is a little closer to Call of Duty than Mass Effect or Halo. It’s chunky, practical, and looks like fancier versions of stuff you could see the military using today. Diaz does a great job at designing new costumes for all the characters that fit the book’s aesthetic, while also being fresh and original.

The one sequence where the issue does come to life is in the opening pages. I’m assuming Zub and Diaz were given a list of crappy villains they could use, but these two guys roll deep with Marvel and have a great time. The Avengers battle the Beetle (Abe Jenkins, the original!), Whirlwind, Titania, and Absorbing Man. In these pages, the creators cut loose and have a good time crafting a solid superhero vs supervillain punch-em-up. When you hire two comics pros like these guys, this is the kind of high quality you expect, and they totally deliver.

But if this was the first issue of a new monthly Avengers ongoing series, it would be lacking. It doesn’t have a hook. It feels a little bit too by-the-numbers. Brian Michael Bendis started his “Avengers” epic with a huge supervillain prison break. Jonathan Hickman started his with mad space gods trying to create a new Garden of Eden on Mars. This starts with the twist that maybe Nick Fury does shady stuff sometimes, which is hardly a twist at all.

So does it make me worry for the video game? Weirdly, sort of the opposite! While I’m still a bit unclear on what the final Avengers game will feel like, it’s been described as an ongoing service game — sort of like a monthly comic book. There’s never really been a superhero game like that. If it really and truly was adapting a story from the comics or movies like “Civil War” (as in Marvel Ultimate Alliance 2) or “Infinity Gauntlet” (as in Marvel Ultimate Alliance 3), I’d be snoozing. But a monthly game where I can battle deep-cut villains in ongoing convoluted dramas? That sounds like the comics I know and love.

I’d recommend “Marvel’s Avengers: Iron Man” to gamers mostly unfamiliar with comics. It’s written by pros who know their way around a panel grid. I wouldn’t recommend it to folks who really want to get into “Avengers” comics; there are so many good ones, better ones, you could be exploring. But I am starting to get excited for the upcoming video game, and in that this comic issue is super successful.

Kick off a Brand New Year With Some Mega Console Deals
Next 7 Things We Want From Netflix’s The Witcher: Season Two
Previous Top Games From 2019 You Should Have Played but (Probably) Didn’t