The Lenovo Legion 5i Pro Meets All Your Gaming Needs

In the market for a new gaming laptop? Willing to spend a little money to get one? The Lenovo Legion 5i Pro is specifically what you’re looking for. In a world still ravaged by graphics card shortages and draconian price hikes, a high-powered laptop is your way out of the muck. For a little more than $1500 USD, you too can get a 4K rig with a 3060 RTX card. Heck, the card alone is almost worth that much! This machine is powerful, portable, and practically perfect for almost all your gaming needs. Even the ‘almost’ in question is a complex little caveat.

The Legion 5i Pro uses the RTX 3000 series of graphics cards. The machine I tested had a 3060. Ideally, there should be nothing you can’t run with this card. It’s a straight up behemoth. Really, the only barrier is optimization, which is out of your hands. Forza Horizon 5 ran flawlessly, only slowing down slightly during a specific loading sequence. The actual gameplay was butter smooth and totally crisp, pure 4K60 magic. It’s only titles like Cyberpunk 2077 and Battlefield 2042 that will give you any grief. Again, these are badly optimized games. Even Hitman 3 was smooth sailing with this machine, and I cranked those settings to an irresponsible level. The only time I ran into problems was when I tried to run the laptop unplugged.

Listen, gaming laptops are only portable in that you can easily carry them from room to room. Modern AAA games eat this thing’s battery like breakfast. I ran Destiny 2 on battery power and got the low power warning after 45 minutes. Worse, the game didn’t run as well on battery mode. As far as I’m concerned, this is the cost of doing business. You can’t expect a tiny machine like this to run a 3060 without every resource at its disposal. Simple games like Vampire Survivors aren’t as hard on the battery, though. If you’re not pushing the Legion 5i Pro too hard, you can get closer to two hours of runtime unplugged. 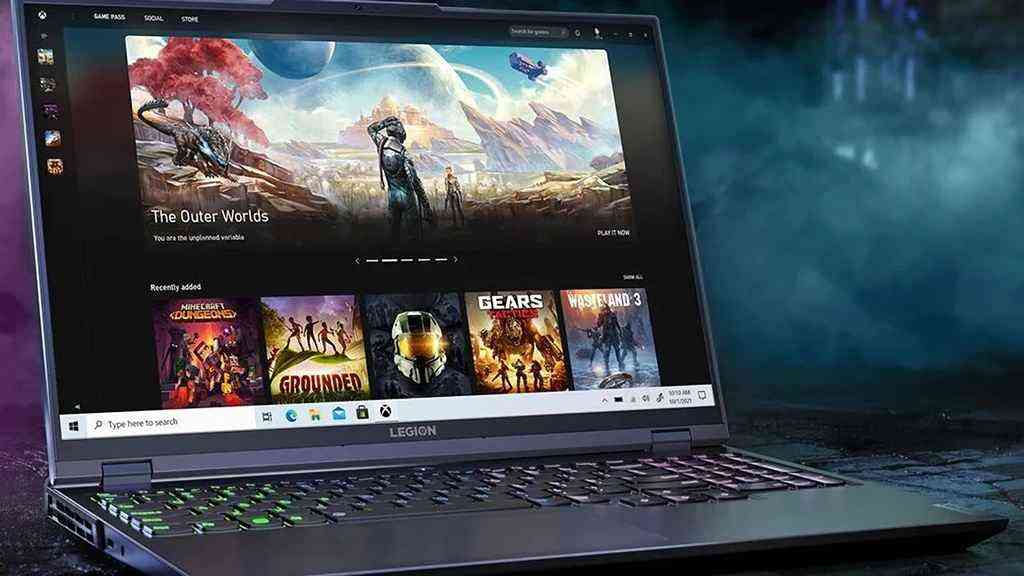 On the speed front, the Legion 5i Pro goes from off to logged in and ready in under a minute, which is great. Beyond that, most games also boot up pretty fast. The curious exception is Forza Horizon 5, which insists on optimizing for PC every single time. Otherwise, games and apps are good to go in no time flat. This is to say nothing of the font-loading, season announcements, and patch updates that are a big part of live service games.

Once your games are loaded and ready to go, they’ll look fantastic. This laptop sports a proper 4K screen, which must be seen to be believed. I’ve had a fair bit of 4K gaming experience thus far, but never on a screen this size. It’s almost more remarkable with a compact monitor like this one. You can cram so many details into a 16-inch monitor!

Everything Looks So Crisp

Like any good gaming gear, the Legion 5i Pro has a fully loaded RGB keyboard. The default lighting setting shows a cascading range of colors as they drift from side to side. It looks amazing, but it throws you right off when you’re actually trying to type. The most important ports are located in the back, which is great for cable management. There’s three USB ports, as well as three USB-C ones. For a gaming laptop, this is critical stuff. You’ll likely be cramming this rig full of peripherals, after all.

There’s more, of course. Lenovo jammed the Legion 5i Pro full of proprietary tech. The Nahimic 3D audio system, the Legion ColdFront 4.0, and the Lenovo AI engine are all geared towards effective gaming. They’ve even thrown in three months of Xbox Game Pass, in case you need hundreds of games to dig into. For me, the tech lives and dies on its ability to actually play games. Thankfully, this laptop chewed up more or less everything I threw at it without breaking a sweat. So long as the software is properly optimized, the Lenovo Legion 5i Pro can almost certainly run it. If you need a portable gaming rig, you could scarcely do better than this fearsome beast.

5 Things I Love About The Asus TUF Dash F15