Gear for streaming, gaming, and podcasting used to be a bit of a niche category. Now, those activities are so ubiquitous that your local Staples store probably has a whole section devoted to it. There’s no lack of mics and headphones at every price point, so where does the JBL Quantum Stream fit in?

The JBL Quantum Stream is a USB-powered condenser mic that can sit on your desk with the included stand, or mount easily to a boom arm. It’s a minimalist metal cylinder that doesn’t draw attention to itself. The build quality is solid, but the unit is pretty lightweight. It’s easy to knock over, so mounting on a boom is probably the way to go. Powered by an included, braided USB C cable, the mic has nearly universal functionality. I tested it with Windows and Mac devices, iPads and whatever other USB gear I had.

There is a mute control built into the top of the mic and a volume control knob on the front. Hidden away underneath is a 3.5mm mic jack and a toggle switch for the two pickup patterns. There are RGB lights that will indicate when the mic is active.

I like the Quantum Stream’s aesthetics overall. The included stand is very short, and the mic is not terribly tall, so sitting on a desk it’s difficult to speak directly into it. 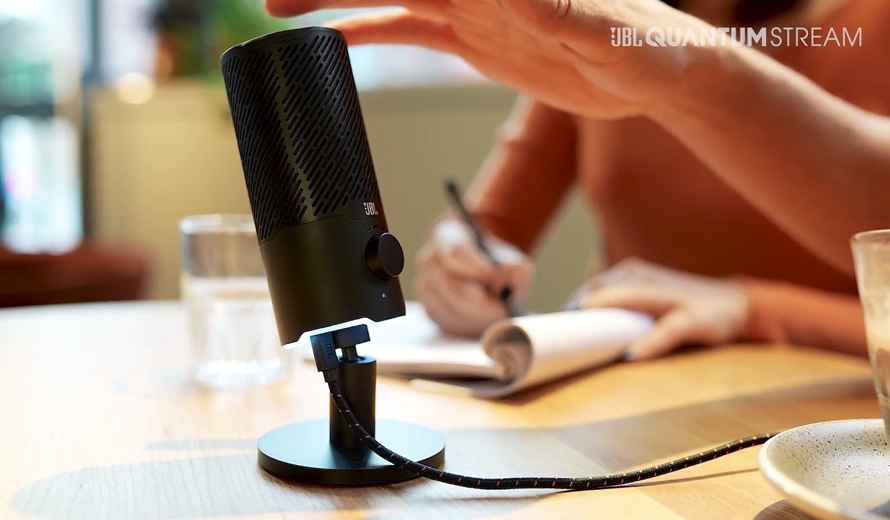 Is it Good Under the Hood?

Looks are important, but a mic is a very specific device. It has to sound clear and crisp. It should handle a wide dynamic range. Some people want their mics to be vanilla and neutral, while others pay thousands of dollars for microphones with a particular sound quality.

The Quantum Stream has two pickup patterns, a nice feature that increases its usefulness. It has a cardioid pattern for recording directly in front, minimizing background noise, and an omnidirectional pattern for use with groups surrounding the mic. It’s easy to switch between them. The Quantum Stream has an acceptable but fairly unremarkable frequency range of (Hz): 20Hz – 20kHz.

At this point, even audio novices understand that most microphones need some sort of post-processing to make them sound good. If you’re using the Quantum Stream with a Windows device, plugging in the mic will initiate a download of JBL’s mic software. The software allows for some fundamental shaping of the dynamic curve, EQ and RGB lights. The software is Windows only. Also, both Windows and MacOS have built in audio processing tools already, so Apple users don’t lose any functionality.

I tested the Quantum Stream in a range of applications, including Zoom calls, gaming, podcast recording, instrumental recording, and vocal recording. Unprocessed, the mic is perfect for uses like Zoom calls or gaming, where the most important quality is simple clarity. For gaming, the built-in mic jack is useful, though of course you’re still tethered to your device by the mic itself. For other uses like professional streaming, podcasting or recording, the mic needs post-processing and even then, won’t reach audiophile standards that serious recordists are looking for. That’s not unreasonable, given the specs. 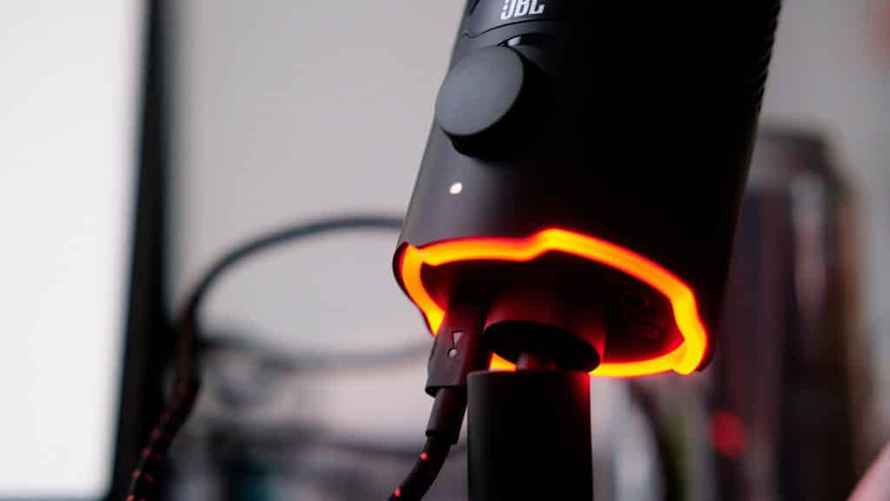 The JBL Quantum Stream retails for $99 US (though it’s currently $79 US on Amazon) which puts it in a strange place in the market. It’s a bit on the expensive side for a basic Zoom or gaming mic, but there are better options for serious podcast recording at a slightly higher cost. I don’t have any real complaints about the Quantum Stream. Build quality and features are good and I liked its aesthetics. At the same time, it doesn’t really stand out from a crowded field of similar devices at both lower and higher price points. If you’re a new Twitch streamer and have the ability to add some punch and richness to your audio, the Quantum Stream might just be a good companion.

***JBL Quantum Stream provided for the purpose of the article***

Gaming Gear 2022 – Your Guide for Gifting